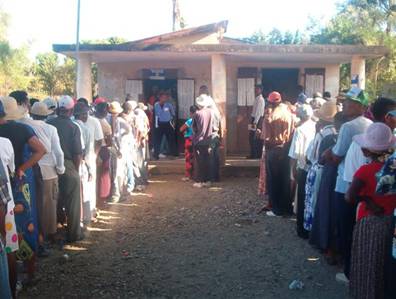 The two observers from the European Union planned to check in on the voting office in Sainton, a crumbling, one-room courthouse, just after 6 a.m. to confirm that the polls had opened on time and without irregularity. They would then continue on to the rest of the voting offices in the South-Aquin electoral district, including the three other offices in the commune of Fond des Blancs. But at 8:30 a.m., the young, French-speaking observers, one representing Luxemburg and the other, Belgium, remained hovering over the lists of registered voters posted on the courthouse doors. Joined by the voting office�s supervisor, Mr. Onald Beauvil, the three officials scanned for the names of registered voters, trying to deduce why the list did not match their official voting register, freshly printed on several sheets of loose-leaf hours before the voting office�s tardy opening.

The new voting process by identification card, the government�s �first attempt at a reliable voter register,� required that election officials permit only those whose names appeared on both the preprinted list of registered voters and the final voter register to vote.

The three disappeared inside to check the official voter register for the third time, and at the advice of the European Union observers, Mr. Beauvil permitted the first trickle of voters to begin casting ballots. And what about those whose names were not on the final register? They were told to walk two to three hours to the next closest voting station in Frangipane to see if perhaps their names appeared on the neighboring locality�s final voting register instead.

The officials� confusion began to wear on the voters� patience � some had stood in place for over three hours – and a crescendo of fiery accusations soon severed the morning air.

�Four voting stations in Fond des Blancs? Where? We have no stations!� cried Francois Frederick of Sainton over the swelling lines of irritated voters as he emerged from a fruitless attempt to vote. Scores of residents entered the small building after Mr. Frederick to find that the faulty final voting register also could not verify their registration. 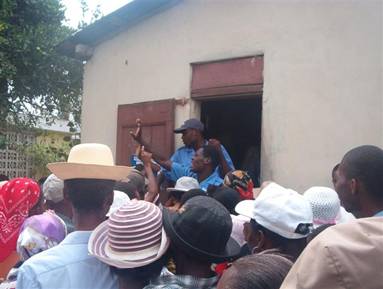 Jean-Pierre Elias, a farmer from Sainton, emerged from the office, shouting curses onto the swelling lines of irritated voters. �Like many voters eager to register, he had trailed the officials from the Office of Election Registration (BIV) to the voting office in Frangipane when the officials had not showed up in Sainton to register voters. The officials had assured Mr. Elias that their office would send his registration back to Sainton before the election, but inside the aging courthouse, Sainton�s final voting register did not have his name, and he too was denied his right to vote.

Out in the street, dozens of community members crowded Mr. Beauvil, who was frantically pleading with motorcycle drivers to help transport voters to Fond des Blancs� three other voting offices. Other voters abandoned the chaos for home when the E.U. observers regretfully admitted, �it is too late; there is no other plan.� Without the capability of printing a revised final voting register for Sainton�s voting office, they could not reverse the problems already in motion. 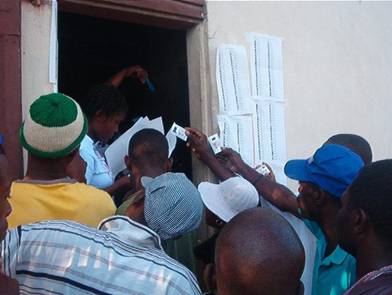 The botched proceedings of the February 7 vote in Fond des Blancs, more specifically, at the voting office in Sainton, did not result only from a faulty list of registered voters. The mountainous, rural commune, like countless others in Haiti�s southern province, has had no substantial interaction with a national government since members of the international community froze development assistance to Rene Preval�s government in 2000. Its roads, made nearly impassable by a particularly harsh rainy season, even prevented non-governmental relief agencies from carrying vital food and medical supplies out to the population of roughly 45,000 predominately illiterate peasants for several months.

As plans for a national election circulated through the offices of Haiti�s interim government and the United Nations Mission in Haiti, Fond des Blancs saw little evidence of the preparations. Only a single presidential candidate, Guy Phillippe, the former military officer and coup leader, bothered to come speak to the community. It appeared that even the candidates had deemed Fond des Blancs inconsequential to their campaign. The international community – Canada, the European Union, and the United States � barreled ahead with elections despite reports of grossly ill-prepared rural communities, thus building upon the area�s historic neglect by financing the elections without making any effort to retrieve Fond des Blancs from the socio-political margins.

Educating the population of Fond des Blancs on the revolving status of the election and about the details of the thirty-three candidates� platforms progressed with similar laxity. Yves Rene Guillaume, a volunteer for the Department Election Bureau (BED) working to prepare the population of Sainton to vote, repeatedly found no one present at BED�s headquarters in Aquin to update him on the details of the election�s four postponements or to even provide him with his education materials. He had difficulty finding venues to speak at as uninformed community members assumed he was campaigning for individual candidates.

While a portion of the $73 million given to Haiti�s Interim Government (IGH) for the elections � almost $30 per vote cast – could have been used to provide the rural citizens with information on the election as well as rudimentary training on how to use the election�s new ballot, paid government officials left the work to a handful of ill-informed volunteers. As a result, hearsay perpetuated glorified claims about candidates raising Haiti�s minimum wage by 400 percent and voting with a new ballot system was left to the guesswork of mostly illiterate peasants.

�Many people are going to vote for the candidate with the best picture,� predicted Mr. Guillaume.

Long-term election observers – those who had followed the election from within the country since before November � explained that an extremely late registration process in Sainton upset election preparations and poised the office for calamity on Election Day. Over a period of two weeks in October, officials from the Office of Voting and Inscription (BIV) came to Sainton a total of five isolated and unannounced days to register voters. On each of the five days, the officials only registered voters after a candidate running for commune deputy supplied his own generator and gasoline to print the legally-required identification cards. Many voters did not even know the BIV officials had come.

Before that time, however, the United States� denial of the United Nation�s Stabilization Mission in Haiti�s (MINUSTAH) request for ten military helicopters to distribute election materials to Haiti�s more isolated rural localities confirmed that Fond des Blancs would become one of the many provincial communes to not only suffer from a lack of civic education and registration materials, but also from the absence of necessary election supplies. 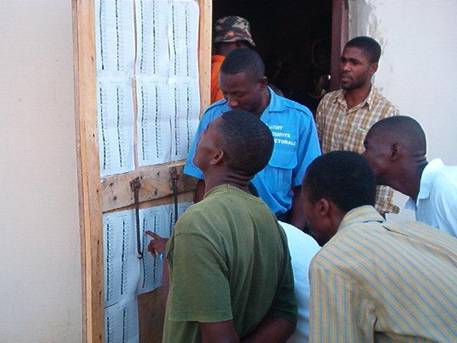 On the day of the election, the erroneous final voting registers became palpable testimonies to an ill-prepared election process that at no time had the capacity to document the voices of Fond des Blancs� isolated masses. Despite the two years of preparation and the seventy-three million dollars spent on Haiti�s 2005-2006 national election, less than two hundred of the four-hundred legally registered voters trying to vote in the Sainton voting office found their names on the preprinted list of registered voters, entered the dilapidated courthouse, matched their identification cards with the office�s final voter register, and successfully cast a ballot. Likewise, Frangipane�s voting office permitted a mere sixty-four of the four hundred voters who had registered at the office to elect the next president and legislative body of their country. Still, the Interim Government of Haiti (IGH), the National Electoral Council (CEN), MINUSTAH, and the international community cannot cite any evidence that the pitiable minority of successful voters received sufficient education and formal instructions how to vote in accordance with the updated election regulations.

Some residents have speculated that political motivations of the above-mentioned groups contributed to the repeated neglect of Fond des Blancs� voters. The residents charge that the groups, sensing a large support in Haiti�s rural communes for presidential frontrunner, Rene Preval, did not work to assure the community�s access to the polls, in an attempt to avoid a sweeping Preval victory. Post-electoral events, including the highly disputed, non-transparent vote counting process that slowly reversed Preval�s initial leap towards a presidential victory one week after the election and the dozens of boxes containing ballots marked by and large for Preval found the following weekend by journalists digging through a Port-au-Prince landfill cannot allow for a complete denial of the residents� grievance. Regrettably, the same non-existing government structures that prevented the majority of voters in Fond des Blancs from participating in the election have also left the people without a means to voice the concern.

UN Special Envoy Juan Gabriel Valdez, seeing the long line of voters pouring down the street past St. Pierre Church in Port-au-Prince, proudly declared Haiti�s presidential election to be �a victory for democracy, a victory for Haiti.� Though the majority of Fond des Blancs�s residents would celebrate the agreement giving Rene Preval the presidency eight days later, in Fond des Blancs, democratic elections alone could not claim the hard-earned victory.

The upcoming legislative runoff, now slated for April 21, will inevitably disenfranchise the same population again, as Haitian law does not permit residents who did not vote in the first round on February 7 to vote in the second round. Still without adequate information on the candidates� platforms or any assurance that further organizational failure will not exclude even more residents from voting, many in Fond des Blancs are bracing for more confusion and disappointment at the polls on the 21. For others, there may be another way of thinking � attempt the election offices, stay, and watch the action of the officials � a sign that rural Haitians have learned to live the oft quoted admonishment, �the price of Democracy is eternal vigilance.�

J.P. Shuster is a recent Boston College graduate and a former volunteer at the Haitian Multi-Service Center in Dorcester, MA. He currently lives and works in Fond des Blancs, Haiti as a volunteer for the St. Boniface Haiti Foundation, based in Randolph, MA.