Half-Hour For Haiti: Insist on a Fair Appeal in the La Scierie Case

Update: Thanks to everyone who wrote to insist on a fair and expeditious appeal for political prisoner Annette Auguste, �So Ann.� The Appeals Court still has not scheduled an appeal hearing, even though the deadline for doing so has expired. Attorney Mario Joseph of the Bureau des Avocats Internationaux (BAI) continues to urge the Court of Appeals to decide the appeal within the prescribed 30 days from the appeal�s filing, May 19.

Dr. Paul Farmer, founder of Partners in Health and a founder and Board Member of the Institute for Justice & Democracy in Haiti, has been nominated for selection as one of Time Magazine�s 100 most influential people for the year 2006. Time is currently conducting an online poll to help determine the finalists, you can vote in the next few days at http://www.time.com/time/2006/time100/walkup/poll/.

This week�s alert is prepared by Maren Dobberthien, a German lawyer working at the BAI:

The Kolektif Fanmy Prizonye (Prisoners� Families� Collective) held its weekly sit-in today in front of the Ministry of Justice. The women continued their protest against their next-of-kin�s prolonged detention without trial. Their movement has by now become well-known through the local media, and their tenacity is a brave example of grass-roots mobilization calling for the respect of the rule of law. 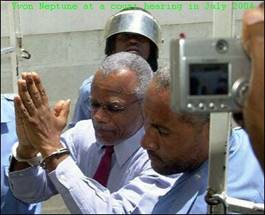 This week�s action: Already at the beginning of October of last year, BAI appealed to the Court of Appeals of Gona�ves against the September ordonnance by an investigating judge of St. Marc in the so-called La Sci�rie case. In her ordonnance, the judge declared that former Prime Minister Yvon Neptune, former Minister of the Interior Jocelerme Privert, former member of the lower house Amanus Mayette, and several

other officials and local supporters of the elected government must stand trial without jury to account for the alleged killings and the destruction of property in St. Marc during the days leading to the forced departure of President Aristide. While the ordonnance speaks of a �massacre� committed by pro-government forces, the press and international observers at the time had reported on a confrontation between pro- and anti-government groups which resulted in a few deaths on each side. This latter assessment was also adopted by Louis Joinet, the UN Human Rights Commission�s Intedependent Expert on human rights in Haiti, during his November 2005 visit to Port-au-Prince.

M. Neptune, imprisoned since June 2004, did not formally appeal the ordonnance out of protest against his prolonged pre-trial detention, but he would still benefit from a decision by the Appeals Court to rescind the ordonnance, as it would apply to all defendants in the dossier.

The ordonnance has several legal errors that can be adduced on appeal. Among other things, the ordonnance is too vague and does not establish in detail the facts of the case and the elements showing the criminal responsibility of each defendant (For example, it covers an entire period between February 9 to February 29 and speaks of 44 people killed, but names only 22 victims and does not further specify the dates and circumstances of their deaths.). Such lack of precision constitutes a major obstacle for the defense. Instead of giving a detailed description of the facts, the ordonnance holds that there are sufficient charges against the defendants to indict them for participation in a �massacre�, a term nowhere defined in the Haitian Penal Code. The ordonnance further orders the defendants to stand trial without the assistance of a jury in violation of Article 50 of the Haitian Constitution which states that blood crimes (crimes de sang) and political offenses are subject to trial by jury. We also raised these errors with the Inter-American Commission on Human Rights in our follow-up conclusions to the petition in favor of Yvon Neptune submitted by BAI, IJDH and the Hastings Law School Human Rights Project.

Haitian procedural law prescribes that in cases where defendants are held in pre-trial detention,� , the Court of Appeals must decide on the appeal at the latest within 30 days of its interjection (Article 15 of the Law of 26 July 1979 concerning the appeal in penal matters). In the case of La Scierie, it took seven months to even schedule a hearing of the appeal. The hearing is now fixed for May 8, 2006, and there is still a risk that the hearing could be postponed or that the Court could further delay its final decision on the appeal. The Commissaire du Gouvernement (Public Prosecutor) at the Appeals Court of Gona�ves, Me. Paphius Roland, requested the Court in his written conclusions (r�quisitoire) to declare the appeal well-founded on the grounds raised by the appellants and to rescind the ordonnance. If the Court decides to rescind the ordonnance, it can either issue a new ordonnance or order an additional investigation by an investigating judge at the trial court. In both cases, the court will order the liberation of those against whom it found no charges.

It is up to the Appeals Court to decide on the merits of the appeal, but we can demand that there be no further delays and that the court take into due consideration the prosecutor�s recommendation to rule in the appellants� favor. Below is a sample letter to the President of the Appeals Court of Gona�ves which we ask you to adapt as you wish. Time is too short again, so please send us your letters by fax: (206) 350-7986 (a U.S. number) or email: avokahaiti@aol.com, and we will ensure that they are delivered promptly.

I am writing to urge you to ensure that the law is respected and that justice is done in the appeals case against the ordonnance de cl�ture by judge Clunie Pierre Jules of St. Marc in the dossier commonly referred to as the La Sci�rie dossier.

The defendants in the dossier have been imprisoned without trial for up to two years on accusations brought forth by their political opponents.

The appeal against the ordonnance of 14 September 2005 was submitted in due form and within the delays prescribed by the law. According to the Law of 26 July 1979 concerning the appeal in penal matters, the Cour d�Appel must pronounce itself on the appeal as soon as possible, at the latest within 30 days of the appeal. Yet, after seven months, no decision has been rendered in the dossier of La Sci�rie, and the defendants remain in prolonged pretrial detention.

I was glad to learn that the hearing of the appeal has now been scheduled for May 8, 2006. I request you to insure that the defendants� right to a speedy procedure be respected, that the hearing be held on the set date without further postponement and that the Cour d�Appel issue its decision without any further delay. I further request you to ensure that the Court takes into due consideration the points raised by the appellants� lawyers in the motivation of the appeal and the recommendation in the r�quisitoire by the Commissaire du Gouvernement, Me. Paphius Roland, to declare the appeal well-founded and to rescind the ordonnance.

Thank you in advance for your consideration of this request, and for your efforts to achieve justice in the case of La Sci�rie.