Half-Hour for Haiti: Insist on Justice for Rene Civil 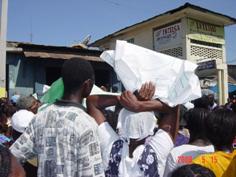 Update: The good news is that on Sunday May 14, elected President Ren� Preval was inaugurated, heralding a return to democracy and the rule of law. The bad news is that the repression continued right up to the swearing-in.� Just before the inauguration, prison officials shot at inmates at the National Penitentiary (see IJDH/BAI Prison Incident Report). Last Friday, grassroots activist Ren� Civil was arrested, apparently illegally, as he returned from exile in the Dominican Republic to attend the inauguration. 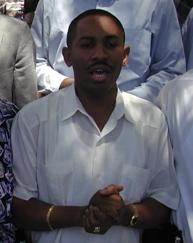 This week�s action: Insist on justice for Ren� Civil. Mr. Civil�s lawyers at the Bureau des Avocats Internationaux have been unable to obtain many details about his arrest, but they believe he was arrested on the basis of charges stemming from the December 3, 2003 violence at the State University. The charges are weak- the judge could not cite any evidence of Mr. Civil�s involvement in the violence, and the prosecutor (Commissaire du Gouvernement) did not even mention Mr. Civil in his final report to the judge (see Analyses of Court Order in December 5, 2003 Case.Mr. Civil�s lawyers have also appealed the charges, which should have suspended the arrest order.

It is possible that there are other charges outstanding against Mr. Civil. If that is the case, the system needs to ensure that those charges have a factual basis and that the proceedings respect Mr. Civil�s constitutional rights.

The prosecutor, Me. Leny Fredd�Herck has helped release several political prisoners since his installation in February, including four in April alone. So please write to Me. Leny, asking him to ensure that Mr. Civil�s rights are fully respected.� A sample letter in English and French (translation courtesy of Jean-Francois Corbett) is below, feel free to adapt it as you wish. You can send the letter by regular mail directly to Me. Leny, or to us by fax: (206) 350-7986 (a U.S. number) or email: avokahaiti@aol.com, and we will ensure that they are delivered promptly.

_____________________________________________________________
Me. Leny Fredd�Herck
Commissaire du Gouvernement
Minist�re de la Justice
18 Avenue Charles Sumner
Port-au-Prince, Ha�ti
Dear Me. Leny:
I would like to thank you for the efforts that you have made to protect the rights of political prisoners within your jurisdiction. The releases of Bob Moli�re, Mario Exilhomme, Harold S�v�re and Jacques Antony Nazaire and others over the past month are a welcome sign that justice and the rule of law are returning to Haiti.
As you know, there will be no justice in Haiti for anyone until there is justice for everyone. So I am also writing to urge you to ensure full respect for the rights of grassroots activist Ren� Civil, arrested on August 12 by Haitian police. Mr. Civil was charged in the case of the December 5, 2003 incidents at the University. Those charges are not based on any evidence that Mr. Civil participated in or organized the December 5 incidents- your own R�quisitoire Definitif in that case did not even mention Mr. Civil�s name. Moreover, Mr. Civil�s attorneys filed an appeal of those charges, so the arrest order in that case has been suspended.
I urge you to fulfill your responsibilities as the people�s advocate by immediately investigating Mr. Civil�s arrest, and releasing him immediately unless there is a clear legal justification for his detention.
Thank you in advance for your just consideration of this request.