Half-Hour for Haiti: Read About our Work 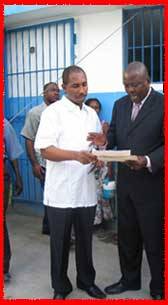 Update: Once again your letters made a difference: on May 25, grassroots activist Ren� Civil was freed. Mr. Civil was arrested on May 12 as he returned from exile to attend the Presidential inauguration. The arrest was illegal, because Mr. Civil�s case was under appeal. Your letters to government prosecutor Leny Fredd�Herck in response to the May 16, 2006 Half-Hour For Haiti alert, combined with advocacy by Mr. Civil�s lawyer, Mario Joseph, convinced the prosecutor to follow the law and release Mr. Civil pending resolution of his appeal (Mr. Civil and Mr. Joseph are pictured at left, outside of the police station following the release).

We do not, unfortunately, have any news on Prime Minister Neptune and the other defendants in the La Scierie case.� Lawyers in Haiti expect a decision from the Gonaives Appeals Court on the defendants� demand for provisional release this week. There is likewise no news on Annette Auguste, Paul Raymond and others whose cases are on appeal in Port-au-Prince.

In political news, the nomination of Jacques Edouard-Alexis for Prime Minister was approved by both houses of Parliament. He now needs to present his Ministers and his General Declaration of Policies for ratification. Currently, Henri d�Orl�ans, who presided over the arrests of many of the political prisoners, is still Minister of Justice. Former Interim President Boniface Alexandre, who abandoned a solid legal reputation in March 2004 to serve as titular head of the brutal Interim Government, announced that he was resigning as a Justice of Haiti�s Cour de Cassation (Supreme Court).

This Week�s Action: So much is in the air with the appeals courts and the government ratification process; there will be no action this week.