Justice in Haiti: Signs of Spring?

In April, as the first flowers of spring of spring were marking the end of a Boston winter, so in Haiti real justice was poking up to mark the end of another dictatorship. Three political prisoners were released to their families just in time to celebrate Easter, and another was sent home a week later.� But just as a sunny April day can turn cold and wet, the very decision that released many of the political prisoners kept others in jail, even though there was no evidence against them either. 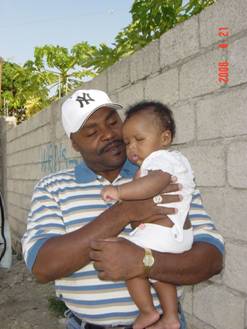 The most recently- released political prisoner is Bob Moli�re , a second-hand mattress salesman and grassroots activist for the Lavalas party. Mr. Moli�re was known to the police, because several times he provided them the required notification for legal demonstrations on behalf of Lavalas. The police arrested him on April 18, 2005, illegally without a warrant. Bob was tortured, and held for a year and 2 days in a squalid prison cell. His lawyers repeatedly pointed out that there was no evidence of any wrongdoing, and petitioned the court to either drop the case altogether or release Mr. Moli�re pending trial. But the court refused. With Bob in prison, the mattress business collapsed. His wife was forced to squeeze their family in with relatives in the countryside, further isolating Moli�re. His wife bore a son in December, who Bob did not see him until his April 20 release.

The three political prisoners released just before Easter were Jacques Antony Nazaire, the former head of �presidential security, Harold S�v�re, former adjunct mayor of Port-au-Prince, and Mario Exilhomme, a grassroots activist from Belair. All three had been held in the case of violence at demonstrations on the State University campus on December 3, 2003. �According to the complaints filed by several student groups and Presidential candidate Charles Henri Baker, on that day pro-Lavalas demonstrators violently attacked an anti- Lavalas student demonstration, injuring several people and damaging vehicles and the University. 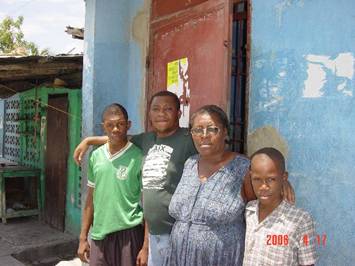 Nazaire and S�v�re each lost 25 months of their lives in prison, half of that after December 2004, when another judge ordered them to be released provisionally. Mr. Exilhomme spent nine months in prison, after being expelled from the Dominican Republic, where he had sought refuge from the IGH�s persecution. Two other defendants in the case- Paul Keller and Rospide P�tion- had spent nine months in prison before being provisionally released in late 2004. The judge dropped the charges against both. Charges in the December 5 case were also dropped against former Prime Minister Yvon Neptune and former Minister of the Interior Jocelerme Privert, but both remain in prison in another political case. 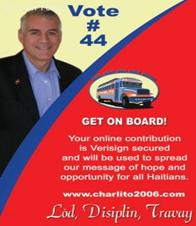 The December 5 case, especially, was a model of political persecution. The defendants were all prominent Lavalas officials or activists. The student organizations that filed the complaints were all part of the anti-Lavalas �GNB� movement.� When asked to testify about the events before the court, almost all failed to appear. Candidate Baker, a top leader of the �Group of 184�, an anti-Lavalas political organization, did come to court, but admitted that he was not even on the scene of the events of December 5. He claimed that he was representing his political supporters and other Group of 184 members, but could not show that anyone had authorized him to represent them. University Rector Jean Marie Paquiot was indisputably on the scene and injured- his legs were broken in the clash. But although he described the attack in detail, Mr. Paquiot could not identify any of his attackers. He conceded that he had named one defendant, Yvon Antoine (who is still in jail), as his attacker based on rumors and an email he had received.

In all of these cases, the reason for dismissing the charge was simple- there was no evidence against the accused. It was not a case of new evidence that discredited other seemingly important evidence. No witness changed his story. The judge did not find that a witness or evidence was weaker than the prosecution had claimed. What the judge did do is officially recognize, after two years of investigation and two years� imprisonment for some of the accused, what the political prisoners and their lawyers had been saying all along: there simply had never been any evidence whatsoever, no justification to think that any of the defendants had engaged in any criminal activity.

If the decision to release the political prisoners cannot be explained by a change of evidence, it can be explained by a change in the political climate. President Preval was elected by popular vote on February 7, and shortly thereafter the government named a new chief prosecutor for Port-au-Prince, Leny Fredd�Herck. Where his predecessors made a point of pursuing high-profile political dissidents without legal justification, the new prosecutor appears to be treating the cases according to their legal merits, and to be encouraging judges to do the same. This encouragement undoubtedly became more convincing as the scheduled inauguration approached. Judges who would like to keep their positions under a democratic government have sensed the need to start judging democratically. 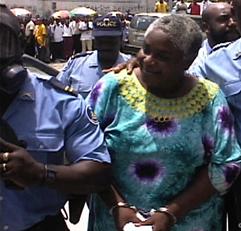 But if the December 5 case shows hopeful signs of progress, it also shows how much work still needs to be done. The prosecutor recognized that there was no evidence against another defendant, folksinger Annette Auguste, alias So Ann, and recommended dropping the charges against her as well. But the judge decided to retain Ms. Auguste in jail, because she had been accused, �by rumor,� of participating in another attack against anti-Lavalas demonstrators a year before, and because Ms. Auguste had declared that she was in charge of� all demonstrations organized by the Fanmi Lavalas party. Yvon Antoine, another musician, is being held for trial on similarly flimsy evidence. Mr. Antoine admitted that he was on the scene of the December 5 incidents, but he denies participating in any violence, and no witnesses linked him to any illegal acts, other than Rector Paquiot�s rumor and email message.

Ms. Auguste and Mr. Antoine have appealed the charges against them, and if the democratization trend continues, the appeals court will dismiss the cases. If not, they go to trial. With no evidence in the file and a prosecutor who finds little reason to pursue the case, the two would run little risk of conviction in a fair trial.

But there may not be a fair trial, or a fair appeals hearing. The Interim Government itself will remain in power until May 14, and the judges it installed will remain for months, even years thereafter. The appeals court may find a way to reject the appeal, and the judge at trial may be intimidated or enticed into a guilty finding despite the absence of evdence. On May 10, 1977, half an inch of snow fell on Boston.