Update: Thanks to everyone who wrote last week to prosecutor Me. Rapha�l JEAN BAPTISTE, asking him to ensure that justice be served in the case of political prisoner Annette Auguste and her co-defendants, all held in the case of the December 5, 2003 incidents at the State University.� Unfortunately, none of the defendants got their 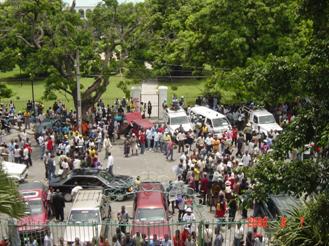 scheduled day in court last week: prison authorities did not transport Ms. Auguste to the Palais de Justice in time for the hearing, and by the time she did arrive the judges had left the building. The hearing in that case has been rescheduled for tomorrow, June 14.
Some slight good news out of Gonaives, in the La Scierie case, which is also before an appeals court (see our May 2 alert). According to preliminary reports, the Gonaives Appeals Court has granted provisional release to former Minister of the Interior Jocelerme Privert. The Court did not rule on provisional release for former Prime Minister Yvon Neptune for technical reasons (the timing of his filing), nor did it rule on the requests of three other co-defendants.
Ren� Magloire has been installed as Minister of Justice. Mr. Magloire has a strong record of support for victims of repression, in Haiti and in Canada, where he practiced law for many years.

This Week�s Action: We invest a lot of energy on the cases of high profile political prisoners, because they more easily attract attention to all human rights violations in Haiti. But we cannot forget that the majority of political prisoners in Haiti are poor, and unknown outside of their neighborhood. Their cases are rarely discussed by human rights groups or in the media.

One such case is that of six grassroots activists accused of participation in the killing of five members of an anti-Lavalas group in rural Petit-Goave in 2002. Three of the six were arrested illegally, without a warrant: Excellent Laviolet and Aline Joseph, arrested late at night (which is illegal even with a warrant) on February 5, 2005, and Raoul Orph�, arrested on April 11, 2006. Their files contain arrest warrants, issued by Investigating Magistrate Alex Cl�danor, but the warrants were dated after the arrests. Judge Cl�danor issued arrest warrants against three others who remain at large, Semereste Boli�re, a former mayor of Petit-Goave, his wife, Roselaure Boli�re, and Dufort Milord, a former member of the House of Deputies. Haitian procedures call for the Investigating Magistrate to issue a summons first, to give the accused an opportunity to explain the accusations against him. In this case there were no summonses in the files, just arrest warrants.

If the five people really were killed in Petit-Goave in 2002, the Investigating Magistrate has an obligation to pursue all the potential leads. But several factors raise suspicions that the pursuit of these defendants is motivated by politics, not facts. First, the normal procedures under Haitian law were ignored. Second, the arrests were made and warrants issued three years after the crime, but shortly after several of the accused had publicly criticized Judge Cl�danor for abuse of his judicial authority. Third, all of the accused are active in pro-Lavalas organizations, while Judge Cl�danor is a leading member of Mobilisation pour le d�veloppement national (MDN), an anti-Lavalas political group that effectively controlled Petit-Goave following the February 29, 2004 coup d��tat.

Please write to the new Minister of Justice, Ren� Magloire, urging him to ensure that the rights of the six Petit-Goave accused are fully respected. A sample letter is below, feel free to customize it. You may send them directly to Me. Magloire by regular mail, or to us fax: (206) 350-7986 (a U.S. number) or email: avokahaiti@aol.com, and we will ensure that they are delivered promptly.

I would like to congratulate you on your appointment as Minister of Justice and Public Security. It is a comfort to know that someone with your record of standing up for the rights of victims of political persecution is leading Haiti�s justice system. I look forward to Haiti quickly returning to the rule of law, and resuming its efforts to create the fair justice system that the country�s majority deserves.

Your Ministry can take a strong step in the right direction by ensuring that the rights of six Lavalas activists from Petit-Goave are fully respected. Three of them- Excellent Laviolet, Aline Joseph (both arrested February 5, 2006) and Raoul Orph� (arrested on April 11, 2006) were arrested without a warrant. Juge d�Instruction Alex Cl�danor eventually issued warrants, but after the arrests. Judge Cl�danor has issued arrest warrants for three others- Semereste Boli�re, a former mayor of Petit-Goave, his wife, Roselaure Boli�re, and Dufort Milord, a former member of the House of Deputies- without first issuing a mandat de comparution.

Beyond these violations of the defendants� rights, several factors raise a concern that the pursuit is more political than legal. The arrests were made and warrants issued three years after the crime, but shortly after several of the accused had publicly criticized Judge Cl�danor for abuse of his judicial authority. All of the accused are active in pro-Lavalas organizations. Judge Cl�danor is a leading member of Mobilisation pour le d�veloppement national (MDN), which effectively controlled Petit- Goave following the February 29, 2004 coup d�etat.

I urge you to ensure that the rights of these six activists are respected, by instructing your prosecutors to review the files. If there is no strong evidence that the defendants are guilty of a crime, the prosecutors should do everything they can to make sure that the prisoners are released, and the outstanding arrest warrants withdrawn. I also request that your Ministry investigate the allegations of judicial misconduct against Judge Cl�danor.

Thank you for your attention to this matter.