Update: We do have some good news this week: Political prisoner Jacques Mathelier was released on Thursday, July 13, after being acquitted at trial. Mathelier, the former Delegu� (the local representative of the Executive Branch) of the South Department and the subject of the June 21, 2005 Half Hour for Haiti alert, was arrested in June 2004, on arson and attempted murder charges. Two years ago, on July 12, a judge ordered him freed for lack of evidence. The Interim Government of Haiti (IGH) responded by replacing the judge with a more compliant official. When the case went to trial last week, there was still no evidence. The prosecutor did the right thing by asking the court not to convict, and the judge correctly agreed. Mathelier was represented by Mario Joseph of the Bureau des Avocats Internationaux (BAI). 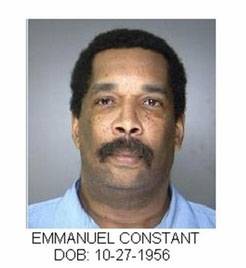 Thank you to everyone who signed the open letter to the Haitian authorities on behalf of justice for Yvon Neptune. Activists in Haiti are using your signatures for a big push to free Mr. Neptune by the end of this week. They hope to convince Parliament to vote a resolution in favor of justice for Mr. Neptune, and are organizing a demonstration on Thursday. On July 11, U.S. Ambassador to Haiti Janet Sanderson expressed her concern at Yvon Neptune�s detention.

Annette Auguste has decided not to appeal the recent decision against her- she would have to go before the Supreme Court, which former Prime Minister illegally packed with his henchman in December 2005- and to go to trial as soon as possible. But according to her lawyers, if her case is not heard during the current criminal court sessions over the next few weeks, �as soon as possible� could mean December.

Last Saturday�s �march in Port-au-Prince for freedom for political prisoners, the return of 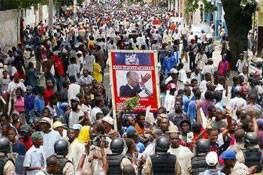 President Aristide and fair treatment for illegally-fired public employees was a success.

Upcoming Events: Next Tuesday is Call-in Day to the U.S. Congress for Debt Relief for Haiti, organized by the Jubilee USA Network. �We will feature the call-in on next week�s alert.

This Week�s Action: Mr. Mathelier�s freedom is an indication that the justice system is starting to work. The continued incarceration of Mr. Neptune, Ms. Auguste and hundreds of other political prisoners is an indication of how much it is not yet working. On June 20, we asked Haiti�s Minister of Justice to do better on political prisoner cases, and on June 25, President Ren� Pr�val committed his government to the timely release of political prisoners, especially Neptune and Auguste. But both remain in prison.

Please write directly to President Pr�val, to thank him for his support for political prisoners, and encourage him to translate those words into action. Ms. Auguste�s lawyers have asked us to specifically urge President Pr�val to ensure that her case be heard during the current criminal court sessions. A sample letter is below, as always feel free to modify it. Letters can be sent directly to President Pr�val by regular mail, or you can send them to us by fax: (206) 350-7986 (a U.S. number) or email: avokahaiti@aol.com, and we will ensure that they are delivered promptly.

Your Excellence:
I am writing to thank you for the commitment you made to free Haiti�s political prisoners during your speech in Miami on June 25, and to urge you to take concrete steps to ensure that those words are translated into action. I understand that Haiti�s Constitution requires respect for the Judicial Branch�s independence, but I would suggest several measures that the Executive Branch may legally take to advance the political prisoner cases.
First, instruct all officials within the Executive Branch to take every possible legal step to liberate the political prisoners. Officials who participate in political persecution, such as Assistant Appeals Court Prosecutor Florence Mathieu, who urged the court not to free Annette Auguste during a July 14 hearing, should not be tolerated by a democratic government.
Second, ensure that judges do not use their Constitutional protections to violate others� Constitutional rights. Political persecution is an abuse of authority, and the Constitution allows the High Court of Justice to remove judges who abuse their authority. By opening an investigation into the most abusive judges, you can send a signal that judicial independence will be respected, but political persecution will not be.
Third, ensure that everyone in the Executive Branch do everything in their power to allow the case of Annette Auguste and the other defendants in the December 5, 2003 University Incidents to go to trial during the current assesses criminelles in Port-au-Prince. Ms. Auguste has already spent over two years in jail, and four months have passed since the Commissaire du Gouvernement admitted that there was no evidence of guilt in her case. The Commissaire du Gouvernement should be informed that this case is a top priority for the current sessions, and judges, prosecutors, police and prison officials should be given all the resources they need to ensure that a fair trial is promptly held.
Thank you for your attention to this matter. 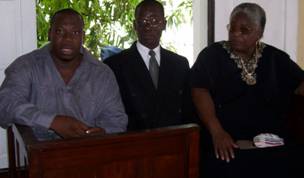