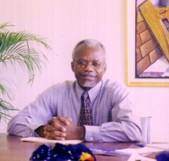 Update: First, our apologies for missing last week�s alert. Unfortunately it was not due to an improvement in human rights in Haiti. Not a single political prisoner has been released in the last two weeks. Even worse, on July 3, the Port-au-Prince Appeals Court rejected the appeals of Annette Auguste, Paul Raymond and Yvon Antoine (see June 13 alert). That may mean they stay in jail for several more months. We will try to have a full analysis of that decision next week. The Gonaives appeals court has not ruled on the case of Yvon Neptune and his co-defendants, seven weeks after the hearings terminated. Also last week, the �Little Machete Army,� responsible (along with police) for the August 2005 Grande Ravine Football Massacre, struck again, killing up to 20 in the Grande Ravine neighborhood (see the initial report of Haitian Human Rights group AUMOHD atAnother Massacre at Grande Ravine).

Text-Only Alerts: Some Half-Hour for Haiti participants have trouble downloading our alerts with photos, so we have started a separate text-only list. Let us know if you would like to move your name to that list.

Upcoming Event: Fondasyon 30 Septanm will organize a peaceful mobilization on 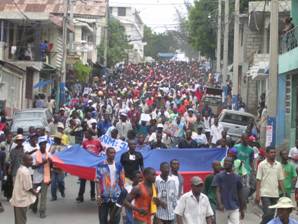 Saturday, July 15, 2006, in Port-au-Prince. The march will have three themes: a) the immediate liberation of all political prisoners; b) the immediate return of President Aristide to Haiti; b); and c) the reintegration of public employees illegally revoked following the February 29, 2004 coup d�etat.

This week�s action: Haitian Human Rights activist Patrick Elie is circulating an open letter to Haitian authorities, urging quick action on all cases of political prisoners, especially the case of Yvon Neptune. The letter has already been signed by dozens of prominent Haitians (see partial list below), from many different political perspectives. Please join your name to Patrick�s effort, to show the elected authorities that people outside of Haiti care about the political prisoners. To sign the letter, send an email with your name and city to info@ijdh.org.

Following the publication of the “Open Letter to the Haitian Authorities” in last weekend’s issue of [the Haitian newspaper] Le Nouvelliste, a delegation from the Chambre of Deputies went to visit the prisoners, particularly Yvon Neptune. We continue to receive many signatures and envision republishing the letter, as well as taking other more direct actions targeting the authorities and public opinion.

Keep up your campaign, and help us to quickly gather more signatures.

For 2 years, a large number of our fellow citizens have been kept in prison without charges, in flagrant violation of our constitution and of the most basic morality. It is more than time that this injustice that desecrates the Haitian justice system and is incompatible with the reconciliation that the whole nation hopes for.

The undersigned express their solidarity with the hundreds of victims, both rich and poor, recognized and anonymous, of this arbitrariness. However, the fate of Mr. Yvon Neptune calls and preoccupies them particularly, given the heavy responsibilities that he accepted to serve his country, and, even more, because his health is compromised and his life in severe danger. The nation and the whole world are witnesses that, confronted with the vindictiveness of some and a lack of courage of others, Mr. Neptune has been forced to a hunger strike, the ultimate recourse of a citizen arbitrarily denied his most fundamental rights.

We cannot assist through silence and indifference the slow death of a man whose political adversaries agree to recognize the serious, honest and sense of responsibility. If the health of Yvon Neptune was irreversibly compromised or if he had to succumb in prison, we would all bear part of the responsibility. Meanwhile, more than anything, those with authority would become guilty of such a tragedy and the disastrous consequences it would bring to our country.

We thus call on the judicial powers, particularly the judges of the Court of Appeals in Gonaives, to put an end to the lynching of Mr. Neptune. It is the members of this power who in fact condemned Mr. Neptune to more than 2 years of prison, without having even heard his case, let alone judged him. Those who crafted this situation have thrown by the wayside the sacred principle of presumed innocence, denied a citizen his liberty, his civil rights and have endangered his health and his very life.

Whatever we think about the veracity of the accusations brought against Mr. Neptune, nothing can justify the preventative detention of a citizen who has never ceased to claim and to prove his willingness to put himself before justice, even at the expense of his physical security. Still, the unjustifiable insistence on keeping Yvon Neptune in prison is an insult to justice and common sense. Meanwhile, we cannot even count the cases in which the justice system has provisionally or definitively liberated citizens against whom there were much more solid charges than those facing Yvon Neptune. He is thus a victim of an infamously discriminatory treatment. The prime responsibility for this is evidently the judicial power, and it should correct this serious denial of justice.

Meanwhile, it is worth highlighting that the constitution calls the president of the republic to see to the proper functioning of institutions and before his�eyes in the case of Neptune the judicial institution has worked in an atrocious manner. When it comes to the prime minister recently confirmed by the Haitian parliament, he knows all the weight of the position assumed by Yvon Neptune in conditions we know were very difficult. The executive power, primarily the head of state and the head of government should clearly indicate their interest and their concern in the face of such a serious affair, which poisons the social and political climate.

The members of the legislature should, for their part, show their solidarity with Yvon Neptune, who, not long ago, was a Senator of the Republic and President of the National Assembly.

Finally, we urge all Haitians and friends of Haiti who are revolted by the fate inflicted upon Yvon Neptune to join the signatories of this open letter, or to loudly and strongly show their indignation before such injustice in whatever way seems most appropriate. We address this call especially to all those who have occupied the position of Prime Minister since this position was created by the Haitian Constitution.

No to vengeful judicial lynching!

May Yvon Neptune recover his liberty and be returned to the care of his family and friends!