HIP – Port au Prince, Haiti � Cite Soleil, a seaside shantytown of more than 300.000 people residing in homes made of cinder blocks with tin roofs, has been described as poorer than India’s infamous slums of Calcutta. On any given day it teems with the life’s blood of Haiti’s poorest citizens.

Despite the twists and turns of what residents describe as several foreign interventions, members of the community still recount with pride how they served as a launching site for former president Jean-Bertrand Aristide’s first election campaign in 1990.

Yannick Jean, a frail 70 year-old woman whose longevity itself is a testament to hope, spoke in hushed tones as she washed her clothes in a ditch of dirty water, “We were the ones who presented Aristide to Haiti when he ran for president. He was our greatest hope. I am waiting for him again.”

A controversial figure, Jean-Bertrand Aristide is a former Catholic priest who was overthrown twice in Haiti’s turbulent political history. His first ouster was at the hands of Haiti’s former brutal military with the support of the traditional economic elite who live fabulously wealthy lives as compared to Haiti’s average citizens.

Where Yannick Jean washes her clothes probably speaks more to Haiti’s current reality and the contradictions of the current United Nation’s mission than any expert on development possibly could. Rising above her and creating shadows over her dirty laundry is a huge edifice of new construction that bears the mark GB. It is a new building that covers several acres and is home to the business of Haiti’s wealthiest man, Gilbert Bigio.

While the surrounding residents of Cite Soleil are forced to literally eat dirt to stave off hunger, Bigio is a billionaire whose family supported the first coup against Aristide and reportedly helped to back the movement that forced his second ouster in 2004.

One need not look very far to see where Gilbert Bigio’s interests lie in relation to Cite Soleil. According to his own company’s web site his family maintains controlling interests in sixteen of Haiti’s largest companies. They are also the largest Haitian partner in the wireless communications giant Digicel, a mammoth company based in Ireland that has nearly cornered the cellular market in the Caribbean. Bigio’s family is not merely wealthy amidst a sea of poverty stricken residents in Haiti, his family represents the �ber-wealthy who have benefited most since Aristide’s second ouster in 2004.

The Office of Foreign Assets Control of the US government blocked all of the Bigio family’s holdings in US banks following the brutal military coup against Aristide in 1991. Since Aristide’s second ousting in 2004, the financial wealth of the Bigio family along with those of other well off Haitian clans such as the Mevs, Brandts, Acras and Madsens have nearly doubled according to a confidential source at a private accounting firm.

Not to be forgotten is the fact that Aristide’s forced departure in 2004 was legitimized and enforced by a UN authorized mission during the term of former Secretary General Kofi Annan. The fact that a few families of Haiti’s traditional elite continue to exact exorbitant profits, while residents of Cite Soleil are forced to eat mud pies and bathe in ditches, has shaken confidence in the non-governmental sector working with the poor in Haiti.

A young woman who began her NGO career to end poverty in Cite Soleil shakes her head in disbelief as she watches throngs wash their clothes and bathe next to Bigio’s glistening plant. There are security towers protected by armed guards at every corner of the property while UN forces in large armored personnel vehicles patrol the outer perimeter. She asks not to be identified and comments, “I bought into the development model the UN used to encourage us to come here and invest in Cite Soleil. The US government funds our organization through USAID and I came here to make a difference in these people�s lives. I am now faced with the reality of a humanitarian crisis we cannot be expected to solve. The UN’s main thrust seems to be security at any cost. This can only result in the loss of another generation of Haitians in this community being lost to poverty and misery. I am ready to quit unless something changes soon.”

Protestors burned tires in front of the Cite Soleil mayor’s office earlier this month to protest a Pentagon financed pacification program. The US Department of Defense targeted $20 million in Cite Soleil for the Haiti Stabilization Mission with the stated objective, “to improve access to police and justice, strengthen local governance, provide vocational training and to create jobs through infrastructure and public works projects.” Protestors complained that rather than creating jobs and improving living conditions, it represents another heavy-handed attempt by the US to control residents through corrupt local politicos in the mayor’s office.

In another corner of this community and trying not to draw attention amidst the children with bloated bellies and the flow of traffic, is a representative of Aristide’s Lavalas movement. Mr. Jean- Marie Samedi was brutally beaten and tortured after Aristide’s ouster in 2004. He is the leader of a movement called the Base of Lavalas Reflection and gave another view to the already disfigured politics of suffering in this community.

Mr. Samedi commented, “At least the people they called bandits and gangsters shared what they had with the community when they were here. People could eat. They had food and had running water. They didn’t have to eat dirt to live or have to wash their clothes and their bodies in ditches of dirty running water.”

As if to punctuate Mr. Samedi’s point, several children run by with almost blondish hair, a clear sign of malnutrition amongst blacks in this Caribbean nation of 8.5 million people. He continued, “They told us that everything would change after they got rid of the bandits and yet people cannot feed their children. You see them forced to wash in this dirty water. What did the promise of the Bush administration and the UN really mean to the people of Cite Soleil? They have merely continued politics as usual in Haiti. The rich get richer while the majorities are forced to continue to suffer in poverty. I challenge anyone to show me the difference they have made for the majority of the poor in Haiti.” Growing visibly angry and bitter Mr. Samedi concluded, “The UN came in here and slaughtered residents who supported Lavalas on July 6, 2005 and again on December 22, 2006. And for what we have to ask? So that Bigio and the Haitian Chamber of Commerce could force us back into accepting this level of poverty? Nothing has changed for the poor in Haiti.” 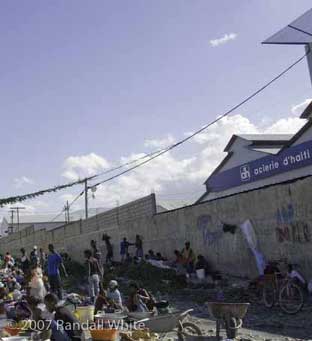 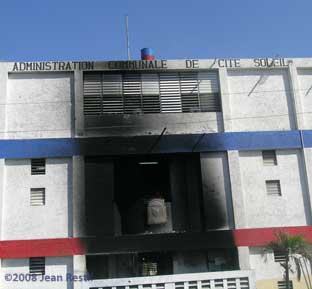