For Canada, Disappeared Haitian Leader is an ‘Unworthy Victim’ 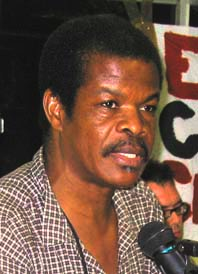 Two years ago today, one of Haiti’s most tireless and well-known political and human rights activists, Lovinsky Pierre-Antoine, was kidnapped. He has not been seen since and has presumably been killed; for now, he remains ‘disappeared,’ both literally and figuratively – his body has yet to surface, and the media and the self described ‘friends of Haiti’ (Canada, France, the U.S.) refuse to report on or press for an investigation into his abduction.

Chomsky and Herman defined the dynamic of ‘worthy and unworthy victims’ in their still-relevant, standard-bearing tome,�Manufacturing Consent: The Political Economy of the Mass Media:

“A propaganda system will consistently portray people abused in enemy states as worthy victims, whereas those treated with equal or greater severity by its own government or clients will be unworthy.”

As one of the most vocal opponents of the 2004 coup d’etat that ousted President Jean Bertrand Aristide, Lovinsky’s enemies were many. Virtually anyone who had a stake in preserving the status quo of foreign military occupation, repression against the once-ruling and still-dominant Lavalas political party and movement, and the shifting back of political power firmly into the hands of Haiti’s notoriously brutal ruling elites, would like to see Lovinsky kept quiet.

Others have noted how the media, and the Canadian government in particular, have largely ignored the Lovinsky disappearance. Why has Lovinsky been deemed ‘unworthy’ of official attention? Some clues appear in a set of documents* that I obtained via Access to Information request in 2005. Although providing only anecdotal evidence, they are nevertheless indicative of the official Canadian mindset at the time.

In the political climate of 2004-2005, when Canada’s Liberal government took on a leadership role in the consolidation of the�coup, Canadian officials described “real journalists” as those who agreed not to challenge the Canada, US, France-led line on Haiti – that is, that the events of February 29, 2004 did not constitute a illegal change of regime, that Aristide resigned under popular pressure, and that the ‘interim government’ and UN occupation were legitimate.

Importantly, every aspect of this narrative has since been proven false: the ‘friends of Haiti’ purposefully destabilized Aristide’s democratically elected government; Haiti’s elites (the ‘Group of 184‘ and ‘Democratic Convergence’) collaborated with U.S. ‘democracy promotion’ agencies (IRI, IFES, CAII, etc.), former death squads, military, and paramilitaries in order to bring about the coup; the Haitian and western media were complicit in the destabilization campaign; and Aristide was kidnapped by U.S. Special Forces on the fateful day.

In March 2005, I was invited to Montreal and Ottawa to join a small delegation of human rights and political activists, journalists, and lawyers, to meet with students, the Haitian community, the media, and, on Parliament Hill, Liberal MP (then-special advisor to the PM on Haiti) Denis Coderre, to expose, discuss and denounce Canadian support for the coup.

This would be the first and one of the only times that I met Lovinsky Pierre- Antoine, who was then in political exile. In those few short days as we travelled around from venue to venue, I was able to gain an appreciation for the respect that he commanded with his intellect, his political astuteness, and his cerebral demeanor. On only one occasion, Lovinsky stepped out of his cool mould and delivered a fiery and militant speech that electrified the Haitian community in Montreal. It would later occur to me that during that speech I observed the threat [of a good example] that Lovinsky posed to the new status quo in Haiti, especially as he would later return from exile to his country and would, apparently, entertain the possibility of running for public office.

Little did any of us know at the time, but an e-mail announcement about our delegation was soon to be circulating within the Canadian International Development Agency (CIDA). The previous month, I had interviewed CIDA’s Director for Haiti, Cuba, and the Dominican Republic, Yves Petillon. (He was the person who oversaw CIDA’s significant funding to several anti-Aristide NGO’s in the years prior to and after the coup).

On March 13, 2005, Petillon received a copy of the event flyer (the sender of which has been censored) that had been forwarded to a CIDA advisor. In turn, Petillon forwarded the flyer to Suzanne Quinn in CIDA’s media relations office. His e-mail contained one sentence that may reveal the sentiments behind Lovinsky’s unworthiness. According to Petillon, I, along with Lovinsky and the delegation’s other participants, were “part of this group that disparaged” the Canadian government.

One of Lovinsky’s ‘disparaging’ comments was printed�in the Montreal Gazette. Said Lovinsky, “Canada is financing the oppression of Haiti, there’s no other way to put it…The carnage has to stop.” The Gazette’s sue Montgomery (who herself turned from cheerleader to ‘denigrator‘ of the coup), wrote “Lovinsky said there has been more than 10,000 assassinations in Haiti by police, military and United Nations forces since Aristide left during an uprising in February 2004.”

Three weeks later, after I had submitted a new media request to CIDA, Petillon told media relations officer Regine Beauplan that “I don’t know if [Fenton] is a real journalist. Indeed, he has participated�in pro-Aristide rallies in Montreal and Ottawa denouncing Canadian policies, not as a journalist but like an activist.”

In a later e-mail, Petillon warned another colleague that it was doubtful that I was “truly a journalist,” because I (along with Lovinsky) allegedly “took part in events of denigration of the Haitian Government and actions of Canada in Haiti.” Because I “support[ed] the groups of former President Aristide in Canada” Petillon inferred that had he “learned these facts” earlier, he never would have granted an interview to me.

With knowledge of “these facts,” then, it is no surprise that when Lovinsky went missing some two and a half years (and much agitation for Aristide’s return) later, there were no Canadian officials stepping forward to support an investigation into his disappearance.�Perhaps in the same way that I wasn’t (and, presumably, am still not) a “real
journalist,” Lovinsky, due to his support for “the groups of former President Aristide” was perceived as not “really” being an important political leader whose disappearance commanded international attention and condemnation. Likewise, since Lovinsky disappeared under a new, Conservative-led government, we can see that Canada’s de facto policy of worthy and unworthy victims endures with non-partisan support.

*All quotations from the documents have been google-translated from French original, which can be viewed here.