How a US Dollar to Haiti Breaks Down, change.org 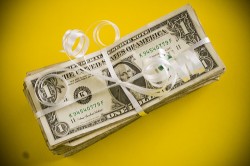 If you’ve been wondering over the past week where, exactly, U.S. government aid to Haiti is going, the AP has published a terrific run-down of literally every penny.

Currently, official U.S. pledges to Haiti stand at $379 million, or about $1.25 per person in the United States.

By the time a U.S. greenback gets to Haiti, that dollar breaks down like this: 42 cents for disaster assistance, 33 cents for U.S. military aid (that is, security, search and rescue teams and the Navy’s hospital ship), 9 cents for food, 9 cents to transport said food, and 5 cents to back “cash-for-work” programs we wrote about earlier this week. Oh, and abut 0.5 cents to the Dominican Republic, to fund three hospitals near the Haitian border.

As President Rene Preval told reporters at a news conference, his government “has not seen one penny of all the money that has been raised…millions are being made on the right, millions on the left, it’s all going to the NGOs.”

He was exaggerating, but barely. According to the AP’s analysis, less than one cent per dollar of total U.S. aid is actually going to the Haitian government.

Given Haiti’s storied reputation as one of the more corrupt governments around, that lapse isn’t surprising — though the Institute for Justice & Democracy in Haiti’s Brian Concannon argues, in an interview with Change.org, that it’s lamentable.

To Concannon, when it comes to the reconstruction process, engagement with the government is a question of accountability. As he  notes, there are some 10,000 NGOs currently operating in Haiti, but Haitians don’t have the ability to vote out any one of them. And while Haiti’s government might be shaken — its president spending his days and nights working and sleeping inside of a tent — it’s still the elected voice of the Haitian people and will remain so, even after the initial wave of relief activities subside.