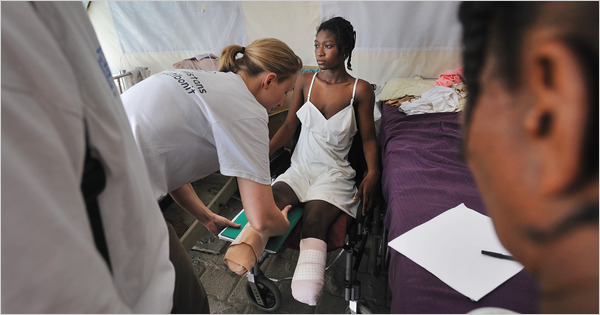 PORT-AU-PRINCE, Haiti — “Don’t cut off my leg!” Fabienne Jean screamed repeatedly as she was carried through the gates of the General Hospital here after the earthquake. “I’m a dancer. My leg is my livelihood. Please, don’t take my leg.”

Skip to next paragraph

After four days on the hospital’s cluttered grounds, lying among what she described as the “dead and living all mixed up,” Ms. Jean was wheeled into an operating tent where her crushed, infected right leg was amputated below the knee.

“It is a sad story,” Ms. Jean, 31, a slim, graceful woman who danced for the Haitian National Theater, said recently, massaging her bandaged stump. “But what can I do? I can’t kill myself because of this, so I have to learn to live with it.”

More than a month after the earthquake, thousands of new amputees are facing the stark reality of living with disabilities in a shattered country whose terrain and culture have never been hospitable to the disabled.

Some remain in hospital tents swarming with flies; others have moved to makeshift post-surgical centers; and those who healed quickly, like Ms. Jean, have been discharged to the streets, where they now live. All need continuing care in a nation with no rehabilitation hospital, few physical therapists, no central prosthesis factory since the quake and a skeletal supply of crutches, canes and wheelchairs gradually being reinforced by donations.

“The situation for newly disabled persons is very delicate,” said Michel Péan, Haiti’s secretary of state for the integration of the disabled. “They urgently need not only medical care but food and a place to live. Also, we cannot forget those disabled before the disaster who, because of their handicap, are having trouble getting access to humanitarian aid.”

Rough estimates of the number of new amputees are based on information from overburdened hospitals that did not keep good records of surgeries. The Haitian government believes that 6,000 to 8,000 people have lost limbs or digits. Handicap International estimates that 2,000 to 4,000 Haitians underwent amputations, and many thousands more suffered complicated fractures, some of which could turn into amputations if not managed well.

Dr. Péan, who is blind and serves in a relatively new post as government advocate for people with disabilities, said that Haiti’s disabled — some 8 percent of the population even before the quake — had long been treated as second-class citizens. But the government has recently taken legal steps to recognize their rights and opened offices to serve them in the countryside, he said.

Ideally, Dr. Péan said, post-earthquake reconstruction could provide an opportunity to make Port-au-Prince, Haiti’s capital, more accessible to people with disabilities and the impetus to create a national institute for rehabilitation.

For the moment, though, the urgent focus is on the uncertain present: making sure the thousands who underwent life-saving amputations have a future.

Handicap International, based in France, has been coordinating the postdisaster rehabilitation effort with CBM, a Germany-based Christian disability group, and with the Haitian government. Its volunteers — about five dozen therapists, nurses, technicians and community workers — have been providing postsurgical care and physical therapy at 12 hospitals here, and the organization is setting up a prosthetics workshop, too.

“We know that persons with injuries and disabilities are going through a difficult time right now, but they should not feel they’re alone,” said Aleema Shivji, an emergency response specialist with the group. “There are services available, and they’re increasing by the day.”

Recently, Caryn Brady, a physical therapist from Canada, made rounds through the sweltering postoperative tents outside the General Hospital. The patients there are being seen by such a revolving cast of international medical professionals, with charts so poorly kept that scribbled messages on bandaged stumps communicate the essentials: “See again on Feb. 23. Thanks. (Smiley face.)”

Bedside, Ms. Brady led Emmanuel Souverain, a university student whose right arm was amputated, through a series of exercises meant to prevent contractures and keep his muscles healthy for a prosthesis — although there is no plan yet to manufacture upper-body prosthetics.

Proceeding on to Mana Alexandre, 22, a double amputee in a white slip, Ms. Brady smiled when Ms. Alexandre showed off, bicycling her two leg stumps fiercely, a proud smile on her face. After more exercises, Ms. Alexandre moved, with the therapist’s guidance, into a wheelchair, but worried about how to get back into bed.

Ms. Alexandre’s stumps dangled over the seat of the wheelchair. “At home, there are chairs with a padded extension that can slide out and provide support,” Ms. Brady said. “But maybe they can find a board?”

The need to adapt is challenging for all new amputees, but here newly discharged patients like Ms. Jean, the dancer, do not even have homes in which to recover or level, paved surfaces on which to plant their crutches or walkers.

On a recent afternoon, Ms. Jean sat on a plastic chair in front of her family’s new home, a small green tent on a rocky hillside. Her sister-in-law stood behind her, stroking Ms. Jean’s long, fine braids protectively as she spoke.

“Dancing was my hobby, my work, my passion, my everything,” Ms. Jean said. She dug out her purse and offered up a couple of photographs of herself in folkloric costume: one, a Judith Jamison-like pose, the other, a slinky Carnival performer. “That was me,” she said. “The before pictures.”

When her house shook violently on the day of the earthquake, Ms. Jean had been preparing to shower. She ran outside in her underwear, a towel wrapped around her waist, she said.

Standing beside a wall, she breathed in relief at having escaped before her home partly collapsed. And then the wall fell on top of her. Pulling herself out of the rubble, she found her leg snapped in two, bound it together with her towel and hopped back into her house to retrieve some clothes.

Ms. Jean does not remember who took her to the hospital, a scene of utter chaos. Two days later, a doctor promised to try to save her leg, she said, but she never saw him again. She lost her leg four days after the earthquake, and her emotions have oscillated since.

After 10 days, the hospital sent Ms. Jean to a makeshift rehabilitation center near the mass graves in Titanyen. An American prosthetics specialist, Dennis Acton, who examined her there, described the place as a kind of “squalid homeless shelter for amputees.”

From there, Ms. Jean was discharged, with a walker, to her doting family. Her father, Roigner Trazile, 48, dabbing at his eyes, said that his hope in life had been lost along with his dancing daughter’s leg.

But, Ms. Jean said that “some foreigners” — Mr. Acton, actually, who was there with a team from New Hampshire — have promised her not only a regular prosthetic but a high-performance one, too, that could allow her to dance again.