Global Aid Is No Relief for Small Haitian Businesses

Business for Ilia Alsene, one of Haiti’s ubiquitous “marchands”—or merchants—who sell food and beverages at curbside stalls here, is a lot worse since the country’s devastating earthquake. But Ms. Alsene doesn’t blame the quake so much as the international relief effort that followed.

“I have fewer customers now because they are handing out free food down the street,” says the 52-year-old, pointing to the nearby Champs de Mars plaza where aid organizations regularly hand out food to tens of thousands of people camped there in tents. 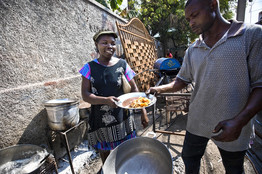 After the Jan. 12 quake, which killed as many as 300,000 people, the world launched a massive relief effort to bring food, water, medicine and other supplies to needy Haitians. The U.S. alone has spent more than $665 million, official figures show.

But only a tiny fraction of that money is being spent in Haiti, buying goods from local businesses. Worse, the aid is having the unintended consequence of making life harder for many businesses here, because of competition from free goods brought in by relief agencies. The damage to Haitian companies is making it harder for them to get back on their feet and create the jobs the country needs for a lasting recovery.

U.S. officials acknowledge that the aid effort has bypassed local businesses, but say the scope of the disaster made getting relief supplies in quickly a priority. They also say they will be buying more products from Haiti as the relief effort shifts to longer-term rebuilding.

Alex Zamor’s drinking-water factory is operating again at near full capacity after suffering damage from the earthquake. But he still hasn’t rehired 200 employees at the factory because sales are so weak. He blames free water handed out by the relief effort.

“Of course we welcome the relief, but nobody wants to buy water if there’s free water on the streets,” he says. Mr. Zamor says international relief agencies should be sourcing more of their products for the relief effort from Haiti itself. “We should be helping Haitian companies instead of companies in Florida,” he says.

In most disaster relief, only a tiny fraction of aid money goes through the local government. And as little as 5% of the budgets of humanitarian agencies is spent locally in the countries they help, according to Peace Dividend Trust, a Canadian nongovernmental organization.

“Every dollar that is spent locally is a dollar spent twice, because it will help create the jobs that Haiti needs to recover,” says Marlene Otis, the Haiti country director for Peace Dividend Trust.

Tom Adamson, a transplanted Canadian, runs one of only two mattress companies in Haiti. Three of his 10 retail stores around the country were destroyed, and his factory suffered minor damage. But he says the biggest effect from the quake has been increased competition.

In the weeks after the temblor, a mattress company in the Dominican Republic sent 10,000 foam mattresses for the relief effort, getting import duties at the border waived. He and U.S. officials say nearly all relief supplies don’t get charged import taxes. Meanwhile, Mr. Adamson’s mattress company has a container of chemicals used to make foam mattresses stuck for months in Haitian customs, where is still being asked to pay import taxes.

“Things like this make it very hard for me to compete,” he says.

Officials at the U.S. Agency for International Development, which is running the relief effort for the U.S. government, say many Haitian businesses were on their knees following the quake and in no shape to handle orders. Quality is another consideration, and products like plastic tarpaulins are being purchased in the U.S. because they can better withstand Haiti’s rainy season, said Carleene H. Dei, AID’s Haiti mission director.

But she said the scope for local businesses to participate as suppliers and contractors in the rebuilding will grow significantly.

“We are very cognizant of the fact that the way to develop Haiti is to work with local organizations,” said Ms. Dei, whose sleeps in a cot in her office because her home was destroyed in the quake. “We are making every effort to do that.”

AID has been mandated by the U.S. and Haitian governments to use local suppliers and expertise as much as possible. But one hurdle is AID’s strict regulations, which call for dealing with companies that have a proven track record and transparency. That makes it more difficult to deal with smaller Haitian firms, many of which don’t have outside auditors, for instance.

Peace Dividend Trust, the Canadian NGO, tries to act as a matchmaker for relief organizations and local companies. Even before the quake, the group built up a database of Haitian companies and posted it on a Web site (www.haiti.buildingmarkets.org) so procurement officers know what is available locally.

To overcome doubts about local producers, Peace Dividend workers visit each company to ensure that it is a legally incorporated firm and has quality products. “There’s a deficit of confidence in local producers that we’re trying to overcome,” says Ms. Otis.

One sensitive area in the sourcing of relief goods is food. The U.S. government buys the rice it distributes in Haiti from American farmers. When France began handing out sacks of rice during a visit here by French President Nicolas Sarkozy, the bags bore a stamp that said the rice was from Haiti.

A U.S. official acknowledged that donation of food brought in from other countries tends to depress prices for local producers, but said it would be a temporary effect. The official stressed that the U.N. World Food Program, which is feeding hundreds of thousands of Haitians a day, will begin trying to buy as much locally grown food as possible.

Frederic Madsen, CEO of Brasserie Nationale d’Haiti SA, Haiti’s largest beverage company and only beer maker, says the fate of his company is closely tied to the fate of Haiti’s marchands, women like Ms. Alsene. “When women like that don’t make enough money, they stop buying my products,” he says. “They are the backbone of this economy.”