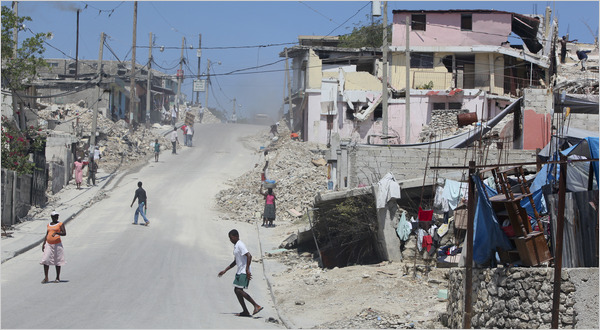 Ángel Franco/The New York Times. Many Haitians on Avenue Poupelard live in encampments too small to attract the nongovernmental groups in the big tent cities

PORT-AU-PRINCE, Haiti — More than 100 long days after the earthquake, Ginette Lemazor, her husband and their impish 5-year-old boy are still living in a filthy mechanics’ lot on Avenue Poupelard.

At least, Ms. Lemazor said, they are no longer sleeping in a junked car, but in a flimsy structure fashioned from plastic sheeting and salvaged wood. They have a bed — “Please, make yourself at home,” she said, pointing to it — and a chair. Yet their yard remains a jumble of rusty wrecks and their future a question mark.

“The owner wants to evict us,” Ms. Lemazor said of the 100 post-quake squatters who remain, out of 300, in the Union Garage lot. “But he knows we have nowhere to go. Really, who would stay here if they did?”

If Avenue Poupelard bustled with a desperate, survivalist energy two weeks after the earthquake, it now emits a low-level hum as residents, vendors and business owners adjust to the snail-like pace of this shattered city’s recovery.

On this centrally located street, the state of emergency is clearly over: the corpses have disappeared, the stench of death has lifted and the foreign doctors who took over the community clinic have gone home. Louis Fils, a 66-year-old coffin maker who churned out wooden boxes for premium prices right after the quake, is holding a liquidation sale.

But Avenue Poupelard is still a tableau of destruction, dotted with a few signs of progress: some newly hammered kiosks, towers of debris dredged from shells of buildings, and uniformed children under tarps in one wrecked school’s courtyard.

“Some of them are still so sad,” said Émile Jean Louis, whose Compassion of Jesus School reopened under tarps this month. “Look at these little girls lying on their desks! They don’t sleep well, and they’re probably hungry. I wish I could offer them a hot meal. But without help from the government, I’m operating on a budget of faith.”

Avenue Poupelard provides a less encouraging picture of the reach of aid, services and information than that found in official situation reports. Tucked into encampments too small to have attracted the nongovernmental groups operating in the big tent cities, many on Avenue Poupelard increasingly feel that they are on their own.

With the large-scale food distribution winding down, many families are subsisting on rice bought from street vendors. But several women said the free food was never easy to get, anyway; the man dispensing ration cards on Avenue Poupelard demanded sex or money in exchange. “That guy, he threw the card in the sewer if you didn’t agree to his terms,” Huguette Joseph, at the mechanics’ lot, said, hissing, “Evil!”

Asked if her situation had improved since immediately after the earthquake, Ms. Joseph paused and said, “I guess it smells better with the bodies gone.” She and others on the street are still looking for sturdy tarpaulins or tents and wondering how to secure a foothold in the new temporary relocation sites, like the one north of this city in Corail Cesse Lesse, to which thousands from the camp at the Pétionville country club were recently moved.

“I’d love one of those places with latrines,” Ms. Joseph said. “The hole we dug for our toilet here is filthy and sick, and now we go inside broken-down houses to relieve ourselves.”

In the makeshift garage itself, six men worked on a single broken carburetor. Clédor Fils Antoine, a mechanic, watched listlessly, saying none of them knew how to find cash- or food-for-work jobs in the cleanup effort.

“The only money to be made is in debris removal, but I can’t get a piece of that,” Mr. Fils Antoine said. “It’s hard to know what’s happening out there. Our government does not communicate except to scare us to death.”

Mr. Fils Antoine was referring to remarks this month by President René Préval, who warned of the inevitability of another earthquake, perhaps more powerful than the last. “I do not know when, but we know that this will happen, and it’s best to be prepared,” Mr. Préval was quoted as saying by Le Nouvelliste, a newspaper.

The president’s comments set off a panic, prompting many Haitians like Mr. Fils Antoine, who had just moved back into his home, to return to the streets.

But Jean-Claude Gouboth, 36, the leader of a small encampment on the grounds of an old villa, said he had ignored the president’s remarks “because the president ignores me.” Mr. Gouboth has already rebuilt his small convenience store with wood from inside his heavily damaged house.

“You have to face the facts and recoup,” he said. “Nobody’s going to do anything for you. The only foreigners around here were at the clinic.”

The Trou Sable (Hole in the Sand) community clinic, on an extension of Poupelard had become a triage center two weeks after the earthquake when teams of foreign doctors arrived. They stayed for two and a half months, leaving behind a shiny blue stretcher, a dozen crutches and medications that are quickly running out. Rosenie Élysée, the clinic nurse, is on her own now, working without pay and worried.

“I was here alone before, so I’m used to it, but now the community has experienced a well-staffed clinic and free medical care,” she said.

Two weeks after the earthquake, The New York Times surveyed 53 structures on a quarter-mile stretch of Avenue Poupelard and found only six that appeared intact. Yet Poupelard is not flattened; it is a patchwork of bad, worse and worst where a hectic commercial life persists and two destroyed schools have been struggling to resume classes since the Education Ministry declared schools reopened on April 5.

Ten days after that date, parents waited patiently in line to re-enroll their children at the United Hearts School, which counted 1,200 students before it was crushed. Sitting at a folding table in the ruins, the registrar, Jesulu Dorléan Rozan, said a government official had promised to demolish the remains of the 30-year-old school and provide tents.

Judlene Colas, 26, stepped up to the table to register her 3-year-old.

Around the corner, Mr. Jean Louis, who is a pastor, stood atop a pile of concrete chunks beside a mural of Mickey Mouse wearing a mortarboard. The government, he said, demanded an unfathomable $1,000 to remove the rubble from his school; instead he paid laborers a few dollars a day to cart it out, but they dumped it right at the entrance.

“Some of these kids were dug out from rubble, and now they climb over rubble to get into school,” he said.

Several dozen students returned when he set up tarps above long, splintering benches and desks. One was Mika Nozière, 11, who jumped rope on a recent morning. “I’m glad to be back here,” she said, smiling. “At home, I daydream about my sister wearing a white dress and going to church with me. But she died.”

A teacher, Patrick Dieujuste, offered a colloquial lesson in earthquake preparedness to older students. “Sheet-metal roofs are safer than concrete ones,” Mr. Dieujuste said. “One guy ran out of a tin-roofed house and died from the cement block that fell on him outside. So you always have to be vigilant. And don’t lie face down on a floor. If the roof collapses, you could suffocate from the dust.”