Fatal magnetism of the city 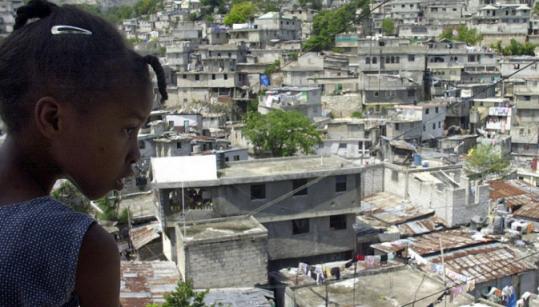 Without proper funding and planning in Haiti’s farming regions, Port-au-Prince will once again be the site of slums such as this one in 2006.
Getty Images (Getty Images)

‘WHAT WE envision today is wholesale national renewal, a sweeping exercise in nation-building on a scale and scope not seen in generations,’’ UN Secretary General Ban Ki-moon proclaimed in his paean to Haiti at a recent confab of 120 countries, international organizations, and aid agencies.

Pledges dribbling in from the United States and Europe were horrifyingly low, adding up to a mere fraction of the tens of billions required to allow Haiti to stagger free of its painfully entrenched predicament. Put simply, Haiti collapsed rather than merely buckled in the earthquake last January because it had packed too many people into too small and fragile a space.

With so little aid in the offing, hopeful calls for the country’s decentralization, of somehow magically relocating Port au Prince residents to small cities and towns scattered throughout the country, are at best utopian and at worst terribly naive.

“There is this nostalgic notion of reclaiming Port au Prince, which 30 years ago was a nice, tropical city,’’ said Enrique Silva, an assistant professor of urban planning and urban affairs at Boston University. “They want to clear out the slums, send the poor into the countryside, and reclaim the city for the elites, make it an elite capital. But they cannot sanitize the city and keep the poor out.’’

City residents require services of housekeepers, gardeners, drivers, and garbage collection that the poor are only too happy to provide. So soon enough the poor will return in droves, and the cycle will begin again.

But it is not only the wealthy of Haiti who are powering this problem. American and European NGOs tend to cluster in the capital, as do most of their employees. It’s tragic but also telling that so many aid and government workers were killed when the Hotel Montana collapsed in the earthquake. A four-star luxury hotel in the capital, not a hut in the countryside or an apartment in a small town, was their home.

While it’s understandable that diplomats might chose to live in the capital, even most agronomists live in Port au Prince rather than in farming regions such as Thomonde, the nation’s bread basket. “In Haiti, there are very few services outside of the capital,’’ Silva said. “There are no universities, few schools, very little culture, very little going on. Not many people are willing to rough it outside the city.’’

So, how can residents be drawn away from dangerously crowded city centers? Certainly, true decentralization requires more than plunking factories in the countryside and hoping that people will flock to them like bears to a picnic.

Studies in Brazil and elsewhere show that while some people leave city centers to work in newly-built, far-flung factories, they do not stay. Without a full fledged effort to support provincial governments, and to provide schools, cultural institutions, hospitals, and other services, such efforts gradually lose traction, and the people return to their lives in the big city slums.

Haiti is not alone in this dilemma. The planet is pockmarked with unstable places — from Shanghai to Nairobi to Los Angeles — where people live far too close together for safety, let alone comfort. According to a UN report published last year, at least 900 million people now live in shantytowns. The World Future Fund predicts that this number will more than double to 2 billion by 2030.

Such unchecked growth of urban slums around the world, coupled with climate change powered weather extremes, have dramatically increased the risk of floods, earthquakes, and other acts of nature building from relatively confined events to full-scale disasters.

Haiti is hemorrhaging, and the Band-Aid we’re offering to apply will barely slow down the flow. For that country’s health and our own, it’s time to rethink policies — economic and political — that encourage the congregation of so many people in such small, vulnerable spaces not only in Haiti, but in urban centers around the globe.

Ellen Ruppel Shell, a professor of journalism at Boston University, is author most recently of “Cheap: The High Cost of Discount Culture.’’