Getting Haiti’s Earthquake Homeless to Move 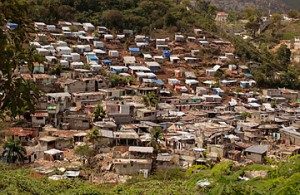 Wrapped in a pearly white faux-satin sheet, Keylyne Zephir, 25, hauls the belongings of her two small children through the mud. Carefully trying not to dirty their Sunday best, she and her kids trek through the rain-drenched trails of a tent city that was once the Pétionville golf and country club. They are hurrying to catch a bus to Corail — and perhaps a better life than the one they have led since the earthquake.

About 12 miles north of the capital Port-au-Prince, Corail is the first temporary settlement where aid agencies have set up shelters, water-distribution points, sanitation, a clinic and a primary school. The new camp is set up to shelter the homeless and protect them from the flash floods and mudslides that often afflict Haiti during the rainy season.

The tents of Corail are set up in a clear open space surrounded by mountains. There is no sign of the congestion of the capital, just the sound of U.N. heavy machinery preparing the adjacent territory. The ground is covered in riverbed rock to prevent flooding during the rainy season and the hurricane season, which begins June 1. On a tour of the camp, President René Préval popped his head into one of the podlike tents and called it a tente de luxe. “The camp has a minimum duration of three to five years,” says Claude Nadon, program manager for shelters at the United Nations Office for Project Services, which plans to make Corail a model for future settlements to help house the estimated 1 million made homeless by the quake. The temporary shelters will also become more permanent structures. Préval adds that there are plans to develop the area further. “We are going to have big factories nearby. It will create 30,000 jobs,” says Préval.

The news that Corail is taking residents passes from tent to tent at the old country club like an electric current. Some Haitians are ecstatic to make the move, some skeptical, and some like Zephir say they have no other option. “We have no choice because we’re living in a place that doesn’t belong to us,” says Zephir, whose house collapsed during the 7.2-magnitude earthquake. “If you don’t leave here, they are going to kick you out.”

Catholic Relief Services (CRS) has already registered about 1,000 families who intend to live in Corail, and in the coming week and a half, four buses an hour will be taking camp dwellers to the new settlement. LeAnn Hager, 40, Camp Coordinator for CRS in Corail, says that no one is being forcibly moved. “There is no one being pushed to make a particular decision,” she says. Bolina Clervil, 33, has already registered her two sons and elderly mother. Sleeping on the dirt ground of their boxlike makeshift tent in the golf club, she says, is unbearable, particularly when it rains. “When the rain comes, it gives us problems. This land will kill people. This is our opportunity to leave,” says Clervil.

There are those who are still waiting to hear more details. Astorvel Jean Raymond says he has nine children to support and can’t be left in the middle of nowhere. “If I’m hungry, where am I going to eat? If I need to work, where can I find work? I have my people here, and I won’t find my people there,” says Jean Raymond, 40, not comforted with the promise of factory jobs to come. That too bothered Jumelia Aristide, 46, when she arrived in Corail. But now she says the distance doesn’t bother her, and she has already mapped out in her mind how to make the journey back to the city to find work.