A new Haiti relief effort will see a camp set up 12 miles outside Port-au-Prince to provide shelter for some 5,000 quake refugees before the upcoming rainy season. The Corail Cesselesse camp is the first major housing effort since the Jan. 12 earthquake. It’s dry, but far from the city, schools, supplies, and jobs. 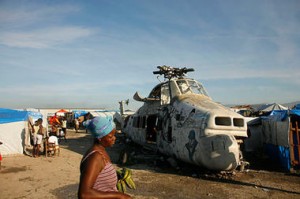 Earthquake survivors are seen in a provisional camp in Port-au-Prince, Thursday. Haiti’s government and foreign aid agencies started an operation on Saturday to move thousands of earthquake survivors to a safer refuge to avoid the risk of mudslides and flooding during the rainy season. Eduardo Munoz/Reuters

Corail Cesselesse, Haiti. On Wednesday, Patrick Berville was selling soda, sanitary napkins, and papaya from the front of his mud-strewn makeshift tent in Port-au-Prince, Haiti.

On Thursday, he woke up ready for the rainy season in a dry, new, hurricane-resistant tent about 12 miles away.

Instead of having to scrounge for breakfast, he dug into his own private supply of MREs – military ready-to-eat meals – that are being provided by the World Food Programme (WFP) to those who volunteer to be part of Corail Cesselesse, the newly constructed transitional settlement site in Haiti.

Corail Cesselesse is little more than a flat, dusty, 11-square-mile stretch of prairie land at the base of Mon Cabrit (the aptly named Goat Mountain), about 12 miles north of Haiti’s capital city. It’s hot, dry and barren here.

But a host of the nongovernmental agencies, including International Office of Migration, Catholic Relief Services, and the US Army’s 82nd Airborne division have joined forces with the Haitian government to create a new housing for 5,000 people. The gravel terrain will soon be lined with 1,300 white tents (650 from World Vision, 650 from Oxfam) set up in row upon row.

In addition to the tents, Corail Cesselesse has latrines and shower facilities. Eventually, there will be schools, health facilities, and commerce. But right now, there isn’t even electricity or regular transport.

The lack of anything but basic infrastructure has fueled some debate over the camp’s location, although it’s largely academic at this point: four busloads a day are arriving with Haitians moving out of the Pétionville Club, the country’s only golf course where about 50,000 earthquake refugees are living in squalor. The first refugees arrived in Corail Cesselesse on Saturday.

“The land wasn’t made available in time to provide essential services,” says Vivian Paulsen, communications coordinator for the International Federation of Red Cross (IFRC), “services that would give residents access to work, transportation, and schools. If they aren’t there, they should be provided as soon as possible.”

Like other organizations involved in this relocation process, the IFRC lacks only land. It has money and materials on hand for 6,000 homes but nowhere to build them. “We are frustrated to not be able to do as much as we wanted to do,” says Iain Logan, IFRC head of operations. “The more land we have, the more we can build.”

The IFRC (and other aid groups ready build new homes) are handicapped by the fact that they are not authorized to buy, lease, or rent land so they are completely dependent on the government’s actions. The Corail Cesselesse camp is the first time the government has used eminent domain to secure the land for relocation.

Of the 1.3 million people displaced by the Jan. 12 quake, about 80 percent are now living in tents or shelters – but many are in flood plains and susceptible to mud slides. The rainy season, which precedes hurricane season (officially starting June 1), has already started.

“If the refugees from the earthquake are not removed from some of these tent camps, they won’t survive,” says Roy McGroarty, who has worked in 97 countries in the last 20 years. Deputy head of mission with the International Emergency Development Aid, Dr. McGroarty is managing the new camp at Corail Cesselesse.

“This is the single worst disaster in a major city that I have ever seen. So this new camp, is it the ideal situation? No. Will it save lives? Yes. It’s the only site that is safe,” he says.

At this point, the camp at Corail Cesselesse will only shelter about 10 percent of those now living in makeshift housing on the golf course.

But Nolsa Roseline, 23, who moved into the new camp on Wednesday, is glad to be here. Her home was destroyed in the quake, and her bed-sheet tent at the golf course camp leaked onto the few possessions she’d been able to recover.

She points to the two plastic bags inside her new blue and white tent. “Here, at least, I am dry. I have food and water. I don’t have anything else, not even a bed. But let’s see what happens in the future. It can’t be worse than what happened in the past,” she says.

And what about Patrick, who was selling items from the entrance of his old tent?

He says he’s not unhappy with his decision to relocate, since it’s the best of many bad alternatives. But he doesn’t see how he’s going to make a living in this new location so far from the city and supplies – and so dependent on handouts.

As of today, the WFP has closed its free food distribution sites across the capital city. From now on, only those designated recipients – children, pregnant women, elderly – will receive WFP food.