Nap Kenbe: BAI is a Safe Space for Women and Girls 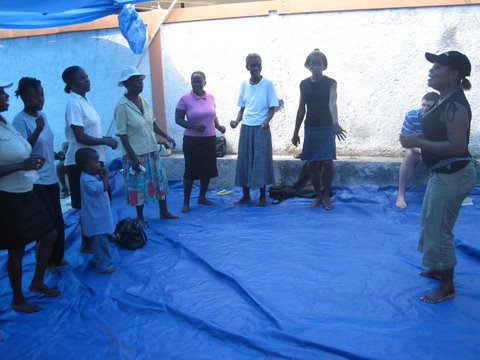 Just a quick note to say I landed in Ayiti without a glitch. It is wretched hot. Thank goodness the other delegation members don’t arrive until Sunday, so I can hog the fan without the guilt.

I arrived at our office (the Bureau des Avocats Internationaux or the BAI) this afternoon where a grassroots women’s group was hosting a press conference to denounce the government’s response (or lack thereof) to the rapes and poor conditions in the camps. One of the leaders put me on the spot and had me introduce myself (yes, in kreyol). Several women came up and hugged me after. I’m pretty sure they misunderstood what I said. Either way, I was grateful for the love. I had been fighting off tears ever since I laid eyes on the BAI’s security guard who lost his wife in the earthquake.

I left for a meeting and came back to the office where I found leadership for another women’s group discussing plans for their meeting tomorrow. Their office building was destroyed.

I walked to the back of the office to find yet another women’s group hosting an interactive training on the rights of children. They quickly made a place for me on the tarp, a makeshift shelter area outside the backdoor of the office. The women spoke about the meaning of the illustrations in the book and acted out scenes, most are illiterate. The whole group, at least 30 women, broke into song and the latecomers had to dance before they could sit down.

My first 5 hours in Port au Prince confirmed for me what I already knew. The BAI really is a sanctuary, a safe space for women. I was sad to see them leave. I don’t know where they will be sleeping tonight. But glad to know they’ll be back tomorrow.

To support our work, consider making a tax-deductible donation here.
Click HERE to Read more about the BAI
Click HERE to Sign petition to help Haitian women fight against rape