BURLINGTON, Vt. — The United States District Court here hired a Creole translator on an on-call basis in February. Three months later she is putting in 10-hour days, working so much that she does not have the time to search for a full-time job. 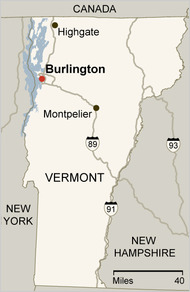 The northern Vermont border has tempted some Haitians. 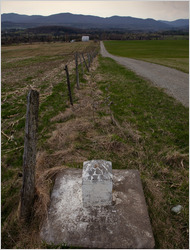 Matthew Cavanaugh for The New York Times, In North Troy, Vt., a granite marker designates the border of Canada and the United States.

The workload for the translator, Chrissy Etienne, 24, reflects the unexpected and unusual circumstances playing out in northern Vermont near the Canadian border: More and more people are trying to enter the United States illegally, and nearly all of them here are Haitian, law enforcement officials said.

Soon after an earthquake devastated Haiti in January, the Obama administration announced that all Haitians in the United States would be allowed to stay and work in the country for 18 months, regardless of immigration status. Rumors that all Haitians would be welcome began circulating in Canada, although the order applied only to Haitians in the United States as of Jan. 12, the day of the quake.

Since Jan. 23, at least 150 Haitians living in Canada have tried, under cover of night, to slip over the border and navigate the dairy pastures and dense forest of northern Vermont.

“This activity is definitely one of the larger groups, if not the largest of any focused nature, that we’ve had on our border,” said Tristram J. Coffin, the United States attorney in Vermont.

The sudden influx of immigration cases has swamped the federal courthouse, where clerks are learning how to pronounce Creole names and filings are being waived to expedite proceedings.

“I remember jokingly saying I’ll never be called because there’s no one who speaks Creole here,” said Ms. Etienne, a native of Haiti who was hired after volunteering at an African community center here. “But this is practically full time.”

Mr. Coffin’s office has charged about 40 Haitians with the federal crime of re-entry after prior removal. The authorities released the others on orders of supervision or under their own recognizance, an official said.

Most of the Haitians caught crossing the border were ordered deported from the United States years ago, Mr. Coffin said, which is unusual for such a large number of cases.

“Almost all of these people have been removed from the U.S. before,” Mr. Coffin said.

And they wanted to return to the country, according to interviews with Haitians in Canada, lawyers and refugee advocates.

“People thought that the United States were going to receive all the Haitians,” said Jean Ernest Pierre, president of CPAM Radio Union, a Haitian station in Montreal. “And as they saw that they had no chance to become Canadian permanent residents and because some of them received negative decisions, some people decided to return to the United States.” 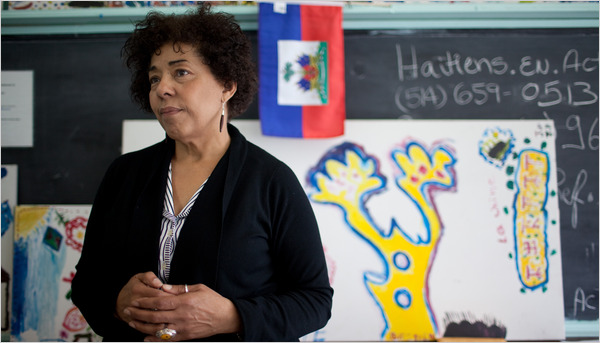 Marjorie Villefranche, program director at Maison d’Haiti, a community center that serves the nearly 200,000 Haitians living in Montreal, said most knew that crossing into the United States was illegal but were willing to take the chance. Many, she said, had trouble finding work and adjusting to life in Montreal.

“They are desperate,” Ms. Villefranche said. “They don’t have family with them, they live alone. They probably think it’s better for them to go back into the States, get a better job and make money.”

Many arrived in Canada in 2006 and 2007, according to American and Canadian refugee advocates, seeking refugee status there after Haitians in Florida complained of stepped-up immigration raids and a group in Florida started directing them to Canada. The Haitians were allowed to stay in Canada even if their applications were denied because of an immigration policy that later changed. The group, which charged Haitians for help with asylum applications, was later shut down by the Florida attorney general’s office for deceptive practices.

Felicier Edmond was hoping to return to family and a construction job in Florida, said his lawyer, David Watts. Mr. Edmond was ordered deported from the United States in 2001 and later went to Canada, joining his wife and son.

Mr. Edmond and a companion were arrested the evening of Feb. 5, when Border Patrol agents spotted them walking south on a Vermont road, trying to flag down a car and “ask for a ride to Vermont,” according to court documents.

Mr. Watts said he was unsure whether Mr. Edmond understood the severity of recrossing with an outstanding deportation order.

“Did he really understand the implications of the order and that he would be charged with a felony?” Mr. Watts said. “He just wants to get back to pay his mortgage. How patriotic is that?”

After discussions with Mr. Coffin’s office, Mr. Edmond pleaded guilty to a lesser charge Tuesday and was living with his wife and son in Florida by Friday, said Mr. Watts. He added that his client was released under the supervision of the federal immigration agency.

Mr. Edmond’s wife said in a telephone interview that she also crossed the border with the couple’s 3-year-old son. She took a taxi to the border and walked over before being caught by agents. She was released 16 hours later.

James Guillaume, 41, was caught on the border in Highgate, Vt., on Feb. 26 and, according to the charges, had previously come into the country through Florida with a fake passport and admitted to agents in Vermont that he crossed into the United States from Canada. Last month a lawyer for Mr. Guillaume tried to convince a judge that he should be released to the custody of his girlfriend.

Mr. Guillaume, clad in jeans and a brown polo shirt with a skull flanked by angel wings and the words “Damage Case” on the back, was led into court with his hands cuffed. He was the sixth Haitian to appear in court that week.

His lawyer, Bud Allen, argued that Mr. Guillaume should be released from detention and live with his girlfriend and other family members in New Jersey. Judge Christina Reiss denied the request, saying that Mr. Guillaume could pose a flight risk and that it could be difficult for him to attend hearings in Vermont.

Mr. Allen said he and his client were considering a number of avenues, including whether he should plead guilty, which might make officials more likely to sentence him to time served.

The cases continue to wind through the court, and Ms. Etienne’s phone is still ringing. The flow, however, may be slowing. Mr. Coffin said it had been a few weeks since he charged a Haitian national with a felony, though more have been caught coming over.

“We took some law enforcement steps on both sides of the border,” Mr. Coffin said.

Haitians in Canada said the number of people who have been caught is making others reconsider, but many are still planning to cross.

“They are determined,” said Erwin-Joseph Jean-Louis, a Haitian who has been granted asylum in Canada. He said that the practice was well-known in Montreal, and that residents helped one another raise money to cross. He knows of few people who have crossed successfully, and thinks more will try.

Some initially came to the United States by raft from Haiti and, Mr. Jean-Louis said, think nothing of stepping over a border.

“They risked their lives and they succeed, so why not crossing this border? It is nothing in comparison,” he said. “Living in the United State is a great life. Even if it is illegally, at least you can live well in America.”