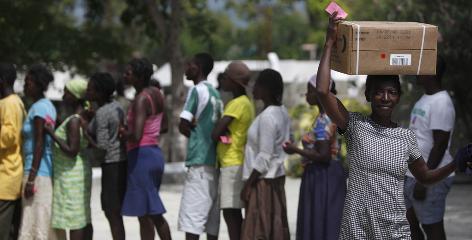 Four months after an earthquake devastated Haiti, Americans have donated $1.3 billion for disaster relief there, almost on a par with theirgiving after the Asian tsunami in 2004, according to a tally by the Center on Philanthropy at Indiana University.

Four months after the tsunami struck Asia, Americans had given $1.5 billion, according to figures tracked by the center. Lower giving for Haiti could be the result of the recent recession, says Una Osili, director of research.

The pace for Haiti relief donations trails that of giving by Americans after the Sept. 11 terrorist attacks in 2001 and Hurricane Katrina in 2005. 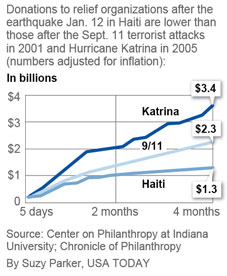 More than half the total for Haiti has been raised by the American Red Cross, which has collected $444 million, and Catholic Relief Services, nearly $136 million, according to a list of relief agencies compiled by The Chronicle of Philanthropy.

Immediate needs in Haiti are so great that relief organizations are spending faster than they initially expected.

Members of a coalition of aid organizations called InterAction, which include the American Red Cross, Catholic Relief Services, World Vision, the U.S. Fund for UNICEF and Save the Children, have planned to split their funds almost equally between immediate relief and long-term reconstruction in Haiti, InterAction President Sam Worthington says. Now, aid groups may have to choose between meeting immediate needs and rebuilding the country later.

“We have the largest humanitarian disaster in an urban setting since World War II. It is tapping the limits of our capacity to respond,” Worthington says. If emergency relief is too expensive, it could eat into the budget for long-term rebuilding, he says.

Partners in Health, which is not a member of InterAction, has raised $66 million and will have spent $25 million by the end of June compared with its original plan of $18 million, spokesman Andrew Marx says. “We could easily have spent all the money we have improving shelter for people in the resettlement camps around Port-au-Prince,” Marx says. By focusing on health care, “we’ve succeeded in doing a lot without completely exhausting the resources that we are hoping to invest in longer-term reconstruction.”

The Red Cross projects it will spend $200 million in the 12 months after the quake, says Nan Buzard, senior director of international response. It has spent more than $110 million, about 90% of it on food, relief supplies and shelter.

“Haiti was a disaster before the earthquake on many different levels,” Buzard says. “You’re not going to have a clear relief-recovery line.”

The cost of reconstruction in Haiti could be $14 billion, according to a study by the Inter-American Development Bank. Nations have pledged $9.9 billion, including $1.15 billion from the U.S.

UNICEF spokesman Patrick McCormick says conditions in Haiti are “not bad, considering the extent of the damage.” There have not been outbreaks of disease because of contaminated water or sanitation, he says. “We haven’t seen huge rioting. The Haitians have been magnificent, they really have. I’m not pretending they aren’t living under very difficult conditions — they are. We need to get them out of those camps.”

Some emergency operations such as search-and-rescue, distribution of tents and tarps and supply of water trucks are “basically complete,” Buzard says. But life in Haiti is still “grim.”

“People still don’t completely grasp how difficult day-to-day life is,” she says. “We have to stay urgent, and we have to stay moving fast.”