On May 25, thousands again marched through the capital to demand Préval’s resignation, Aristide’s return and an end to the military occupation 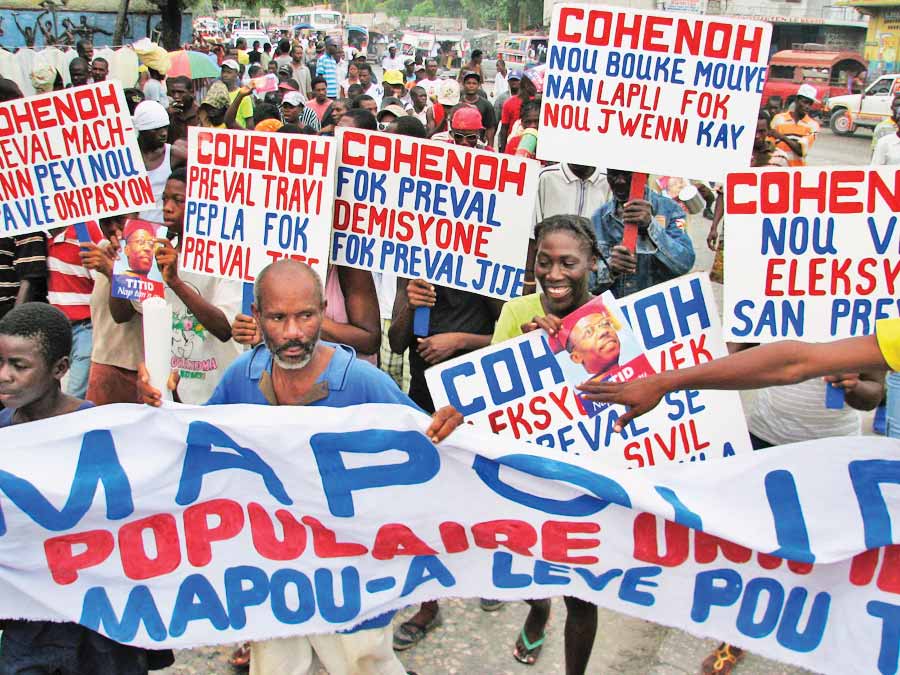 The President of Haiti’s Provisional Electoral Council (CEP) announced on May 24 that presidential and parliamentary elections would be held on Nov. 28, 2010, the Constitutionally prescribed date. “The CEP is up to the task of organizing general elections in the country,” said Gaillot Dorsinvil, who is also the Handicapped Sector’s representative on the nine member council, handpicked by President René Préval. But tens of thousands of Haitians don’t agree and have been demonstrating in streets around the country in recent weeks to demand, not just a new CEP, but Préval’s resignation.

“Nobody has confi dence in Préval or his CEP to organize credible elections,” said Evans Paul, a leader of the Convention for Democratic Unity (KID) party and the political platform Alternative. Both groups, along with a number of other right-wing politicians and parties which supported the 2004 coup d’état against former President Jean-Bertrand Aristide, have joined in an unlikely alliance with popular organizations at the base of Aristide’s party, the Lavalas Family. The alliance, called Heads Together of Popular Organizations (Tèt Kole Òganizasyon Popilè yo), has held three massive demonstrations of many thousands in the capital on May 10 May 17, and May 25, all calling for Préval’s resignation, Aristide’s return from exile in South Africa, and repeal of the “state of emergency law” that puts a foreigndominated council in charge of Haiti’s reconstruction, among other demands.

Nobody is more distrustful of Préval’s electoral supervision than Lavalas militants, who saw their party, Haiti’s largest, disqualifi ed last November by Dorsinvil’s CEP from parliamentary elections that were to have been held on Feb. 28, 2010. Radio Solidarité broadcast a long telephone interview with Aristide, in South Africa, on Nov. 25, 2010, the day after the CEP’s decision, asking for the Lavalas Family’s electoral inclusion and a passport for him to return home (see Haïti Liberté, Vol.3, No.20, 12/2/2009). Neither request was ever honored.

Fourteen other parties were also disqualifi ed. The Feb. 28 polling was cancelled after the Jan. 12 earthquake. A previous Préval-appointed CEP, containing fi ve members of the current one, also disqualifi ed the Lavalas Family from parliamentary elections held in April and June 2009. Those elections were massively boycotted, with less than 5% of voters turning out. On May 25, thousands of demonstrators, starting from three different locations, converged on the crumbled National Palace for the third time in two weeks. Lavalas marchers left from La Saline’s St. Jean Bosco, where Father Aristide used to preach, and St. Pierre Place in Pétionville, while organizations of “reformed” coup supporters, traditional political parties, and former “student” activists like Hervé Saintilus, stepped off from Jérémie Place, near Carrefour-Feuilles

Under grey and rainy skies, the demonstration was spirited but peaceful, although barricades to prevent marchers from demonstrating in front of the Palace were swept away by the crowd, which fi lled the broad street between the Palace fence and the earthquake victims’ tents on Toussaint Louverture Place.

With the announcement of elections, some politicians have stepped back from the anti-Préval mobilization. Sweatshop owner Charles Henri Baker, a former presidential candidate and the number two of the Group of 184, a procoup front in 2004, turned out for the May 17 march but dropped out from May 25. Other pro-coup politicians, hungry for elections, are expected to follow suit. A number of popular organizations support the mobilization but are extremely suspicious of the formerly pro-coup politicians’ involvement.

“We must not repeat the experiences of 1986 and 2004, where the big embassies replaced the fallen chief of state with the complicity of unscrupulous politicians,” warned the Democratic Popular Movement (MODEP) in a declaration. “In 1986, after Duvalier fell, the U.S. imperialists replaced Jean-Claude Duvalier with General [Henri] Namphy. In 2004, the U.S. and France were running the show. In both cases, the sneaky politicians and the bourgeoisie agreed to play in the imperialist’s dirty game. Today, we must learn our lesson and not be duped again. We should be alert for the doublecross, and we should join forces with those whose politics resemble our own.”

Meanwhile, on May 24, Brazilian soldiers of the UN Mission to Stabilize Haiti (MINUSTAH), the military occupation force, drove three military vehicles into the State University’s Ethnology College to arrest an outspoken anti-occupation student, Frantz Mathieu Junior. The soldiers’ illegal entry onto inviolable school grounds unleashed a fi restorm. Enraged students poured into the streets around the school, burning one vehicle and smashing the windshields of several others.

“Today, Préval has sent MINUSTAH troops to provoke us this afternoon,” one student demonstrator told Haïti Liberté. “Now we students are standing up to call for Préval’s removal, and the occupation forces must leave!”

In response, MINUSTAH troops fi red rubber bullets, pepper spray, and large amounts of teargas, affl icting not only student demonstrators but patients in the nearby General Hospital and the whole Champ de Mars area. CNN reported that it was “one of the most serious confrontations since the quake.” The UN apologized for breaching the University’s grounds on May 25.

A similar MINUSTAH crackdown occurred on May 18 in Cité Soleil, in the area of Simon-Pele. Brazilian troops began fi ring their automatic weapons in all directions. Rosemond Aristide, the division inspector in charge of the Cité Soleil police station, was in a police vehicle but had to take cover. When he called offi cers under his command to come assist him, the Brazilian troops aimed their weapons at the Haitian policemen, forcing them to retreat, Rosemond Aristide said. The Brazilian soldiers arrested Aristide’s family members who were riding in his vehicle. The MINUSTAH troops said they had received orders to search all vehicles, including Haitian police cars.

The elections are also seen as occupation tarnished. Tellingly, Edmond Mulet, MINUSTAH’s civilian chief, while visiting the Central Plateau over the weekend, announced the Nov. 28 elections before CEP President Dorsinville. The Haitian people took note of the diplomatic gaff.

At both Monday’s student demonstration and Tuesday’s mass march, the most ubiquitous slogan after “Down with Préval!” was “Down with occupation!” Now the rains have begun in earnest and most earthquake homeless still remain under tarps and tents. Desperation and anger are at all time highs. Resentment over last year’s electoral fi ascos still runs deep. Major anti-Préval and anti-occupation demonstrations are planned for May 27 and June 1. If the mass mobilization does intensify and rock Préval’s power, May 18 and May 24 could prove to be just foretastes of the confrontations to come between UN occupation troops and the Haitian people.