Reflections from a week among Haiti’s women

After a whirlwind six days in Port au Prince, Emily and I have much to share. Our trip actually came two weeks ahead of schedule. We received a request from the Protection Officer for Sexual Exploitation and Abuse working on behalf of the UN Office for the Coordination of Humanitarian Affairs, who relayed the enormous and immediate need for mechanisms to streamline protection, documentation, and service provisions around gender-based-violence. Her mandate was to create this mechanism and she asked whether we could join an “interagency working session” just a few days from our initial phone call – in Port Au Prince – to provide technical expertise at the meeting.

Just a few days later we were in the air and then suddenly on the ground in the midst of the rubble and rebuilding efforts under way. Our first engagement, after a brief meeting with our host, was a security briefing with MINUSTAH – the UN security detail operating in Haiti for the better part of the past decade. We then attended a brief coordination meeting at which we heard the organizer asking for suggestions of more realistic and concrete items they could request from donors in the US, who most recently had supplied a number of gas guzzling SUV’s to this country – where gas is in short supply if available at all. 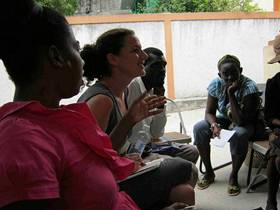 Port-Au-Prince is a city of contradictions, at once completely devastated, at once filled with hope for a different kind of future for Haiti. One week later, after meeting with thirteen local women leaders  from five different organizations, teaching and actually learning far more in the process, we are back in New York. This post includes some early reflections and learning that resulted from our time in Haiti.

Why Haiti’s Women?
Digital Democracy has been working in Haiti since before the earthquake, and we worked to support the tech community’s response in helping to save lives in the early weeks following the disaster. In March, at the Commission on the Status of Women, I attended a panel at which women leaders from Haiti spoke about their reality – pre and post earthquake – and I realized that like in conflict and post-conflict settings where there are opportunities for creating vast structural change in favor of equality, natural disasters provide a similar opportunity. Women in Haiti have always been excluded from decision-making and formal governance processes throughout Haiti’s history, but the more I read and heard from Haiti’s women, the more I learned about the vast legal and cultural discrimination that has led to decades of violence targeting women and their relative poverty and suffering among Haiti’s already poor population. In the 1990s, after the military coup, political rapes became a cause around which many of the leading women’s organizations today were founded. Nonetheless, while community organizations have developed to fill the vacuum of formal responses, women’s access to proper medical, psychosocial, and legal attention is barely existent. The earthquake worsened the lot of these women, but it is also an opportunity for rallying behind them to ensure their access to aid, and ultimately, a greater share of decision-making power. These are just a few of the facts I learned that led me to dedicate my energies to working with women of Haiti:

Approximately one third of Haiti’s population was directly affected by the earthquake. Many of the people we met on the trip lost an immediate member of their family, and amputees and others who were injured by the earthquake are visible everywhere in Port Au Prince. The disaster, and the subsequent humanitarian response, is unprecedented. Similarly, distrust of governing powers by a large swatch of Haiti’s civil society and thus, the strong community organizations that have sprouted up to serve the needs in the governance vacuum cause unique challenges for aid workers and Haitian society as a whole as it faces a prolonged recovery and rebuilding.

Women’s status in Haiti before the earthquake was already dismal. Now, it is significantly worse. Gender Based violence was a major concern for national security pre-earthquake and women are at significantly increased risk and have reported growing incidence of sexual violence.

While this history is the reason we went to work with Haitian women, we departed for Haiti with two primary goals. First, we wanted to solidify relationships with actors on the ground and learn more about the use of technology—including mobile phones and mapping software—to streamline and more effectively address sexual violence and child protection in the aftermath of the earthquake. We met with the amazing folks at OCHA and other UN agencies including UNIFEM, UNICEF and the UN Special Envoy for Haiti on Gender; NGO partners including the Bureau des Avocats Internationaux (International Lawyer’s Bureau), Parnters in Health, the Institut Interuniversitaire de Recherche et Developpment (Interuniversity institute for Research and Development),  and community based groups including KOFAVIV, FAVILEK, CONAMSI, and other women’s community organizations. We learned so much from them all.

Second, we wanted to do what we could in just a short week to give tools to women leaders that would enable them to have greater voice, visibility, access, and impact in the rebuilding effort. To this end, we lead a two-day photo and media training and left cameras and other equipment behind so that they can continue to hone their skills, document their work, and be empowered by technology.

We remain grateful to everyone who helped us to make this trip possible and for the contributions that enabled us to bring digital cameras to leave with the women leaders we worked with last weekend.  Their photos are incredible – the next post will share more in detail.

What you can do
Our pilot media workshop made clear the need for trainings that support women’s organizations – by contributing to our work, you can help us return to Haiti to further support these women.

Please help us to support Haitian women’s protection and security by viewing a short film produced by our partners at the New Media Advocacy Project, the Institute for Justice and Democracy in Haiti, and Partners in Health on sexual violence in the camps following the January earthquake.