Conditions in Haiti on a Steady Decline

Attorney Jayne Fleming is leading a legal/medical delegation working out of the BAI office to prepare humanitarian parole applications for earthquake victims needing treatment in the U.S. 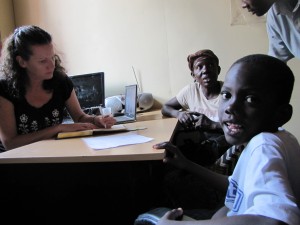 It’s a new day here in Haiti. Holly and I camped out at the BAI, which was quite comfortable. The air mattress I brought along this time is the best investment I have ever made!! Far better than sleeping on cement!  Even the roosters could not wake me at their usual 4:00 am.

I slept until 5:00 and now I’m showered and ready to get to work. I need coffee, but have to wait for one of our interpreters to get here at 8:00 to escort me to the cafe around the corner! I could probably order coffee in French or Creole (one would hope), but the street scene is a little chaotic and still intimidates me in terms of walking alone.

Yesterday was an extraordinary day.

The sense of shock I felt during the week I was here in March has diminished, not because conditions have improved, but because the devastation around me now registers in my brain as the norm. What a tragic reality.

In fact, conditions here are on a steady decline. The rains have come, at least at nighttime. Still, millions are without tents. Conditions in the camps are unbelievably harsh. Animals live better. The largest camp in Port au Prince has more than 18,000 people. There are more than a thousand camps in the country, most in the capital. 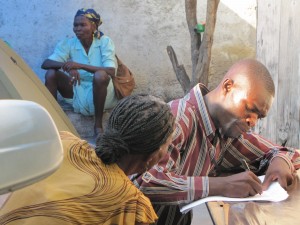 Now, I am told, all aid to those camps in the capital targeted for closure has stopped. The apparent plan is to starve people so that they will be forced to migrate to rural areas. There does not appear to be any reliable plan in place for this decentralization. Poor people simply need to move on, find their own way, get out of the way. The re-builders are coming with their billion dollar construction plans, which don’t include low-income housing.

Given the tragic humanitarian situation here, how can I describe my day as extraordinary, you ask? Well, first, I reconnected with the leaders of Kofaviv and Favilek, our grass roots women’s groups. It was wonderful to exchange hugs and tell them about the dresses and perfumes and gifts we brought for their groups.

I also met with Mario Joseph, the leader of the BAI and a legendary human rights lawyer. I am incredibly humbled to be working in an office across the hall from him. I do not speak Creole, but we definitely speak the same social justice language. His commitment to the poor is deeply inspiring.

Later in the day I met two of Holly’s amputee clients who  have new legs!

Getting them prosthetics is a major achievement in this horror scene. The clients were radiant! Hopeful. Restored. If we achieve nothing more in this project (and we will achieve more), their happiness makes it all worthwhile.

Finally, I met up with the lovely green-eyed girl who stole my heart in March (the child who was induced into a horrific prostitution scene and escaped). It was great to give her a hug, take her emotional temperature, and give her some gifts.

The day was good. Very good. 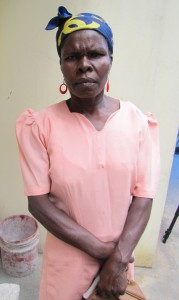 Today the hard work begins. I have 27 clients to see in five days. More than half are survivors of gender-based violence. The leaders of Kofaviv and Favilek tell me that violence in the camps is increasing. The level of impunity is at an all time high, the government response at an all time low.

The most vulnerable ones, young girls with no families, are lambs to the wolves.

We are trying to support the women’s groups, but what is needed is an awakening on the part of those in power. Right now they appear to be in a coma, at least when it comes to gender issues. But the women are incredibly strong and united, which is reason for hope.

I’d better wrap this up for now. I have to get the interview sheets done for our NY team. Then I am going to find coffee!!

To support the work of the BAI, consider making a tax-deductible donation here.