Daniel Tardif a volunteer attorney from the International Senior Lawyer’s Project picked me up from the airport: Perhaps Mario (Managing Attorney of my organizational host, the BAI) figured that since this was my first time in Haiti, my Kreyol would be less than perfect. (Photo to the right of me and Haitian Attorney Ouvens Jean Louis)

On the news, we often see Hilary or Bill Clinton standing on top of a pile of rubble.  However, without seeing the whole city it is hard to have any understanding of the inequalities that became so clear in the earthquake: The wealthier neighborhoods have either been rebuilt, or were built carefully the first time, and they remain standing.  In contrast, the poorer areas have been flattened and public areas have been replaced with displacement camps.  Daniel told me that Haitians refer to the earthquake as “Le Douzieme.” This reminded him of the way that Americans refer to 9/11. 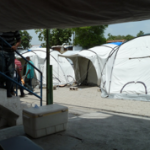 We were soon caught in a torrential downpour: a reminder that today was the first day of hurricane season. We passed one of the many camps in Port-au-Prince.  In contrast to others I had seen, this camp had tents from USAID. When there was no longer enough room for tents, aid agencies began to pass out tarps. When there were no more tarps, families began to use t-shirts and sheets, stretched across sticks.   The efforts to build housing for refugees are piece meal and may be too little too late.  In 2008 about 800,000 were affected by seasonal flooding beginning in June and lasting through October.  Without proper shelters, medical professionals have long been predicting that Malaria and Typhoid will plague the city in the coming months.

That night we drove by a camp near the National Palace.  There were many street lamps but all had been turned off.  One man told me this was the government’s way of “asking them” to leave.  I wondered where the government wanted these people to go. I couldn’t imagine walking to the latrines at night and I thought of the women who had been attacked in these camps.

Even if there were concrete buildings available, it is unlikely that anyone who had been trapped under a roof would live in such a building again.  If there is a formal building code in Haiti, I could not find it easily online and I wondered if any code would be enforced in attempts to build shelters before the rainy season.

The BAI office is open 24 hours a day, 7 days a week. When I arrived at 7:00 AM a reporter from the Montreal Gazette was waiting to speak to Mario Joseph, the BAI’s managing attorney, about a case involving a Canadian missionary.  Within the hour of his finishing the meeting, Mario received an email from a Spanish speaking lawyer in the US who was working on a Temporary Protected Status case.  He translated her English interpretation of the woman’s statement into Creole and then French, and finally wrote a response in English.  Before 9:00 am, Mario’s had spoken more languages than I could ever hope to learn and his words had reached several countries.

Over the next few days, I accompanied Mario to visit each on-site lawyer for the Health and Human Rights in Prisons Project (HHRPP). At each site – St. Marc, Mirebalais and Hinche – he met with the judge where he discussed the concept of Habeas Corpus.  Discussion may be an understatement as the whole building could hear them.  In Mirebalais I was introduced to one of the only female judges.  When told about my study on the social cost of pretrial detention she asked what BAI could do about the pretrial detention problem.  Would I suggest bail?….Mario pointed out that “we already have a bail system in Haiti: if you’re rich you can pay to get a trial faster or even get out of jail, and if you can’t pay, you must stay in jail.”

After they debated whether an illegal arrest made the detention illegal, Mario explained that by giving the judges the resources and asking them to think about these issues, he could make the “slow but steady change.”
Haitians may not be arbitrarily arrested, prosecuted or detained (Article 24-1, Haitian Constitution).  If arrested, they may only be held 48 hours before seeing a judge, who must rule on the legality of their arrest (Article 26). In September 2009, the HHRPP interviewed 389 prisoners and detainees in St. Marc, Mirebalais, and Hinche, and found that the average length of pretrial detention was 280 days.  If their arrest is deemed legal and they are detained, individuals awaiting trial must be held separately from individuals serving sentence (Article 44).  Though the judges understand the importance of this article, all three I met, said their jurisdictions did not have the means for such facilities.

The Constitution also requires the government to operate prisons in accordance with standards reflecting respect for human dignity according to the law (Article 44-1).  Over the next three months I will visit each prison, work with the HHRPP, and research the social cost of prolonged pretrial detention on the families of detainees.  I hope to discuss prison conditions in Haiti and its effects on society in this forum. 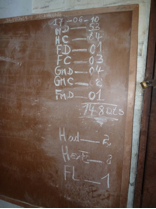