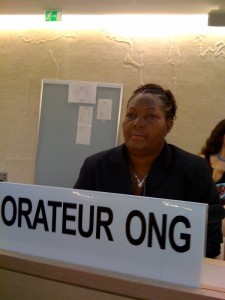 “Voices like mine are often not heard in forums like these,” Malya Villard-Appolon testified before the 47 member states of the United Nations Human Rights Council in Geneva on Monday this week. In fact, Malya almost did not make it to Geneva. It took four lawyers, several interns and volunteers, in Haiti and the U.S. working nearly full-time for two weeks to get her there. Although she was eventually granted a visa to visit Switzerland, she could not secure a transit visa through the U.S. in time. MADRE, sponsor of Malya’s trip, had to purchase a second plane ticket flying through Guadalupe. I can think of several better uses for the money.

I accompanied Malya to Geneva with lawyers from MADRE and the law firm Morrison & Foerster (both of whom had accompanied me in May on an IJDH-led investigative delegation looking at the issue of rape in the displacement camps; the subject of my previous blog posts). Malya urged the Council to “remind donors that the ‘UN Guiding Principles on Internal Displacement’ implore government to consult with Haitian women and ensure their participation in decisions in that impact their lives.” Our role was to make sure that Malya’s voice was heard and follow-up on her demands – lobbying the Council to pressure for increased security in the displacement camps and involvement of grassroots women at every stage. The trip presented strategic opportunities for advocacy and engagement with donor nations, the Government of Haiti and the UN that will hopefully lead to concrete results on the ground – .

Malya is a leader of KOFAVIV, a grassroots women’s organization in Haiti that has worked with victims of sexual violence since 2004. Through their community outreach workers, KOFAVIV has documented at least 242 cases of rape in Port-au-Prince since the January 12 earthquake. Malya believes their work is only scratching the surface of the problem. KOFAVIV’s work is quite extraordinary. All of the members, including the leadership, have been raped. Some, including Malya, have been raped on multiple occasions. Some, including Malya, have witnessed their daughters being raped.

In addition to the larger Council session on Monday, Malya shared her concerns in a private meeting with the UN Special Rapporteur on Violence Against Women. Rapporteur Rashida Manjoo, and her Chief of Staff who happens to have lived in Haiti for 3 years in the past and is married to a Haitian, listened to Malya and offered their assistance within the confines of the Rapporteur’s mandate. Among the most important, she will forward our materials to Michel Forst, the UN Independent Expert on Haiti and make sure that concerns about violence against women are included in his forthcoming report and recommendations.

On Tuesday, we hosted a Press Meeting at the UN. Malya spoke in more detail about the severe suffering of women and girls post-earthquake, inadequacy of the government response and failure of the international community to engage with poor women and groups like KOFAVIV. Later that afternoon, we attended a side-event discussing the issue of reparations for violations of women’s human rights. The discussion was theoretical, focusing on frameworks, applicable principles and best practices for gender-sensitive schemes. At some point a panelist mentioned the importance of involving a grassroots perspective in the discussions. Malya’s presence was underutilized within the formal structure of the dialogue, but significant. It showed that it is not impossible to engage.

In a separate conversation, Malya shared her frustrations with me. “Blaine, we have met with so many foreigners and shared our stories. Nothing has changed. We are tired.” I could see it in her eyes. The trip to Geneva was Malya’s first trip outside of Haiti since the earthquake (second in her life), outside of the camp where she shares a single tent with 20 family members. She confided that she slept more during the three days in Geneva than in the last five months. We slept no more than 4 hours a night if that gives you any indication. The heat alone is enough to keep her up, but it’s more the fear. Fear that she or one of her daughters or her neighbors will be attacked, again.

We have much work to do, following up on our work at the Council, to make sure Malya’s efforts were not for naught. Making sure Malya’s voice – and that of the 1,500+ members of KOFAVIV – was heard was only a first step in our campaign to press the international community to act to reduce gender-based violence in the camps. Securing funds to hire a Haitian woman lawyer to push forward domestic cases seeking justice and help organize grassroots organizing and advocacy is among one of our highest priorities.

At least one woman got to leave the hell of Haiti’s camps for 3 days to give her the much needed energy to continue the fight and make sure Haiti’s women pap kase or don’t break, something Malya assured me time again.

You can follow the Rape Accountability and Prevention Project (RAPP) here and help join us in our efforts to help Haiti’s women fight against rape and the underlying social structures that keep them poor and vulnerable by contributing your time and money here.

Read more about the delegation on MADRE’s blog here.