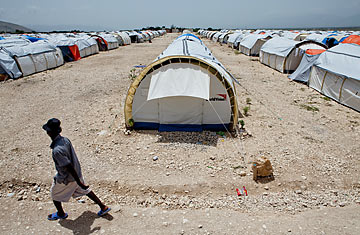 On Monday night, July 12, severe winds blew away about 350 tents in a tent city in the Port-au-Prince suburb of Corail-Cesselesse. There were no deaths reported, but six people were injured by flying tent poles and debris. And the hurricane season has yet to hit its stride in Haiti.

The omens are not good for the 1.5 million Haitians still homeless after the Jan. 12 earthquake, mostly living in box-shaped tarpaulin emergency houses, some set up haphazardly, others planned out but still fragile as the ones in Corail-Cesselesse were. One approach to the crisis is to set up what are called transitional shelters: structures composed of plywood walls and steel frames, durable enough to stand up to inclement weather and strong winds but not meant to provide long-term housing. Each unit, which can house a family of five, can last about three years and costs an average of $1,000 to build. That relatively small amount has helped push transitional shelters over more-permanent housing. “It’s a practical decision,” says Adam Fysh, coordinator for the so-called U.N. shelter cluster group that is overseeing the structures. “You can help 40 families vs. four.” There are plans to build 76,000 additional transitional shelters in the next nine months.

However, so far, there are only 5,500 such units in the Port-au-Prince metropolitan area and its immediate environs. Of them, 1,300 are in the capital itself; the rest are located outside the city in areas like Carrefour, where land-ownership objections have been raised by an active mayor and long-standing nongovernmental organizations. The pace of building new shelters has quickened recently: 5,000 of the 5,500 shelters were built in the past two months. But what took so long — six months after the catastrophic temblor — to get the process going?

>p>Timo Luege, the U.N. spokesman for shelter cluster, points to the slow removal of the estimated 20 million–to–25 million cu. yd. (15 million to 19 million cu m) of debris — enough to fill the Louisiana Superdome five times. Also, land-ownership disputes continue to stall construction of the temporary shelters. “You want to get people out of tents and tarps as soon as possible,” says Luege. “But we have a big problem when it comes to finding land to create housing solutions.”

The land disputes can get heated and can even turn violent. Earlier this month, gunmen allegedly representing landowners threatened staff members of the International Organization for Migration (IOM), an intergovernmental group attempting to relocate residents of Parc Fleurieux. The tents in the community were set up around a flooded soccer field, putting the people in them at risk of not only rising floodwaters but also water- and insect-borne disease. IOM spokesman Leonard Doyle says the region’s mayor gave IOM permission to use the land in the Tabarre region of Port-au-Prince to resettle the people from Parc Fleurieux into tents and eventually transitional shelters. “We had assessed them for evacuation, and now we’re at a dangerous crossroads,” says Doyle. “We have been pressing very hard to get land.” However, the gunmen forced them to stop their resettlement plan, and now IOM and the U.N. shelter cluster hope to relocate the Parc Fleurieux residents to another site 10 miles (16 km) north of the capital, in the tent city of Corail-Cesselesse.

There are some organizations, however, that do not believe transitional shelters are the solution — and not just because of the problems in setting the structures up. “Transitional housing winds up to be permanent housing — essentially slums,” says David Rivard, head of humanitarian logistics for Airline Ambassadors International, a humanitarian group created by airline employees. “It’s really going to be wasting the money.” Adds Rivard: “Transitional shelter sets a precedent to build unsafe buildings and unsafe communities.”

His organization is working with the United Nations Stabilization Mission in Haiti (MINUSTAH) to build 160 homes in the central region towns of Mirebalais and Pandiassou. The $3 million project includes plans to construct homes that would come with proper sewage and water treatment, drainage and community centers. The average cost per unit is $16,000, but Rivard says the price difference is well worth it in the long term. The project has been able to avoid land-ownership issues because local ministries donated the land. Homes will go to 500 displaced people who fled Port-au-Prince seeking refuge with family members in the provinces. There are an estimated 600,000 other Haitians in the same predicament, so Rivard hopes this will be a starting point for other projects.

U.N. spokesman Luege isn’t so sanguine. “If you put 500 nice houses on some field and there are no jobs, no infrastructure, it’s not going to work,” he says. Yet Luege defends the decision to stay with the transitional shelters, saying they’re cheaper and use less material. In the confused atmosphere of postquake Haiti, few people have commented on the fact that two U.N. agencies — MINUSTAH and the shelter-cluster organization — are pursuing different housing agendas.

In the vast tent city in Corail-Cesselesse, an open field has been cleared out, awaiting the wood frames and steel reinforcements of transitional shelters. During the earthquake, Abekay Robert lost his home and most of his possessions in the Delmas area of the capital. Now he lives with his wife and toddler daughter in a podlike tent. He’s been working with the humanitarian organization WorldVision to design a suitable transitional shelter for his community. But he says he doesn’t have any intention of making Corail his permanent home. “They told us that this is a temporary shelter. Temporary doesn’t mean years,” says Abekay Robert. “We don’t intend to live here for long.” But the next question is, Where will the permanent houses come from?