Six months after Haitian quake, many barriers to recovery 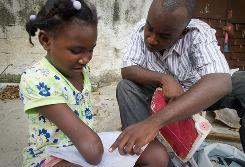 Ernst Leo helps out his 7-year-old daughter, Therissa, with her homework. She lost her right arm to the devastating January earthquake, and even though they live in a Port-au-Prince, Haiti, tent city, he manages to scrounge up tuition for her to continue her studies.

Every night, they crawl into a cramped tent barely big enough to hold a mattress and their few belongings.

For six months, they have lived on the street in a once-thriving middle-class neighborhood. Every day, they hustle for basic necessities. Their bathroom is in the home of a neighbor whose house is still standing, their evening light comes from Leo’s cellphone and their meals from other families who live in nearby tents.

Leo, 33, a computer technician, wonders how much longer they have to live this way or where else they can go.

His wife of 12 years and older daughter died in the earthquake. His house, like most buildings that collapsed, remains a heap of concrete and debris.

“Since January 12th, I’ve never received any aid,” Leo says in French. “Ever since this dramatic event, it’s like life has no meaning anymore. Nothing has changed in six months.”

Six months to the day since a magnitude-7.0 earthquake leveled 60% of the city’s buildings and killed 230,000 people, there are few visible signs of improvement.

Buildings destroyed by the earthquake lie where they collapsed. The presidential palace, which became a worldwide symbol of the devastation, remains a gleaming heap of concrete.

One of the biggest challenges is helping the estimated 1.5 million people who were left homeless. More than 1,300 makeshift camps sprang up after the earthquake. Food and housing are scarce and expensive, even for the few, like Leo, still working.

“It’s an emergency response still,” says Mary Kate MacIsaac, a spokeswoman in Haiti for the Christian relief group World Vision. “We are still meeting the basic needs of people in these camps … but it’s not sustainable. We need to transition into the recovery or the long-term goal.”

Frustration is high among Haitians and aid groups who say they see halting and haphazard progress toward recovery.

The Haitian government — responsible for the cleanup but still reeling after the loss of most of its buildings and many of its workers — and the aid groups blame each other for the lack of progress.

“There is no global view or plan of action to date from the government,” says Pierre Tripon, mission director for the French aid group Action Against Hunger. “There is no agenda with priorities. No cohesion in the projects being done. If people don’t share the information on what projects are being done, we’re headed for a catastrophe, and we are already at our limit.”

Minister Felix Longchamp, secretary-general to the president, says that despite the millions of dollars pledged to help Haiti, the funds are going through international aid organizations, which are not coordinating efforts. “I am deeply frustrated with how things are going now,” he says.

•The country has avoided outbreaks of disease, particularly waterborne diseases such as typhoid. That’s largely because aid groups continue to provide 6,000 cubic meters of clean water daily to the camps, says Imogen Wall, a spokeswoman for the United Nations Office for the Coordination of Humanitarian Affairs, which works with aid groups.

•The government has set up two temporary sites of transitional housing to move families away from the crowded camps. They are in remote areas where land was available. Aid groups have built 3,200 family shelters — less than a house but stronger than a tent — at those sites. They plan to build an additional 125,000 by next year.

•Haitian and foreign engineers have assessed 170,000 buildings to see whether they are structurally safe, need repairs or must be demolished. The goal is to get people back in their homes if they are safe, says Russell Porter, deputy coordinator of USAID’s Haiti Task Team.

Engineers marked Leo’s house with red letters, meaning the home must be demolished. Leo can’t even think of rebuilding where his wife and daughter died. For him, and thousands like him, recovery remains elusive.

Leo and his daughter have tried to develop a routine amid their tragedy. Every day, they wake at 5 a.m., and Leo takes Therissa to the house behind their tent to wash and get dressed.

He buys her food on the street, but prices are so high he spends about one-third of his daily $8 salary. After gas, Therissa’s tuition and other expenses, he has little left to buy food for himself.

Leo takes Therissa to school, a private Christian school that did not collapse. Almost a quarter of Haitian schools were damaged by the quake.

Therissa lost her right arm after she was buried under rubble for two days. She’s one of about 70 people on a waiting list for prosthetic arms at one agency, Handicap International.

In the meantime, Leo has taught her to write with her left hand.

“She tries very hard,” he says. “What hurts me in all this is that she asks me, ‘Do you think I still can become a doctor?’ ”

He encourages her, but privately he is not sure. Before the earthquake, living in Haiti was hard, he says. Now, it’s brutal.

The government needs to help people find permanent homes and jobs, he says.

Other families in his camp feel similar strain.

Nearby, 15 families sleep under a donated tarp.

“We have no food. We get our water by walking to a well and getting dirty rainwater,” says Elimane Fortelis, who lost her job as a government office worker to the earthquake. “We all have been here since the beginning. No one has come.”

She says someone took down their names at one point, but then nothing happened.

Even those who received government help and were relocated to one of the transitional sites say they are far from the capital in areas with scarce food or water and few jobs.

Jimmy Rafael, 27, was a bellboy at the Montana Hotel, destroyed by the quake. He says he and his family moved to one of the sites because they were promised better housing, but all they got was a tent.

He left after a month and moved back with his wife and son to the makeshift camp in the capital where they had lived immediately after the quake.

“For now, I’m in the city, even if this camp is on a hill and we live in mud, but I can find little jobs here,” he says. Pointing down the hill, he says, “My house was down there. Everything is destroyed, so I don’t know where we will go from here.”

Haitians blame their government for inaction, poor communication and missteps they say have plagued the recovery.

“What needed to be done was to show leadership, but instead, it was overwhelmed by events, absent from the very beginning,” says former Haitian prime minister Robert Malval. He says the government has failed to reassure people that work on a recovery is underway.

Longchamp says people need to understand how badly the government was weakened by the quake.

“Our buildings collapsed, we lost many colleagues, we lost family members, we lost our homes,” he says. “It was madness. It’s Haiti, a small country without the means and the tools to react to this kind of catastrophe.”

The government, which lost 28 of its 29 buildings in the earthquake, is operating out of tents and prefabricated structures behind what’s left of the presidential palace.

Even for a stable country, the circumstances would be difficult, says Wall of the U.N. humanitarian affairs office. They are more daunting in Haiti, the poorest country in the Western Hemisphere, she says.

“This stuff takes time,” she says.

For example, rats and insects are infesting hospitals and sickening patients, says Raleigh Jenkins, president of ABC Home and Commercial Services in Houston. He was part of a team led by the National Pest Management Association that taught Haitian hospital workers how to maintain sanitation under extreme conditions.

“Nurses told us that rats were chewing on patients’ ears and eating medical supplies, and you could hear the buzzing of flies and mosquitoes everywhere, even the baby delivery room,” Jenkins says of one hospital he visited. “I watched them walk out with hazardous waste and waste from the kitchen and throw it off the side of a hill.”

In the face of such problems, recovery and reconstruction remain uncertain.

A report last month to the Senate Foreign Relations Committee says recovery has stalled. Among other things, it says, Haiti has to establish a comprehensive rebuilding strategy, strengthen its government and determine where to move the homeless.

Before people can be resettled, however, Haiti needs to figure out what to do with the estimated 20 million cubic meters of rubble left by the earthquake. As long as the rubble remains, rebuilding can’t happen.

The government has paid Haitians to break the rubble into smaller pieces by hand, but it doesn’t have the heavy equipment needed to haul it away.

The rubble is emblematic of the kinds of problems Haiti faces, Wall says.

“Moving rubble sounds so simple,” she says. “But when you try to do it, it becomes complex. For example, human remains are still under the rubble, so you have to stop and retrieve them properly. Then the rubble has to go somewhere. We are working with the government to find where it’s going.”

Right after the earthquake, hopes were high to rebuild a new Haiti, one better than before with a better-functioning government, up-to-date infrastructure and technology, and strengthened industry to provide better jobs for its people.

Today, that talk is muted.

“It was a lot more loud and clear before … we were confronted with every obstacle and challenge we’re facing now,” says MacIsaac of World Vision.

Still, she says, there is hope for the future.

A new commission headed by former president Bill Clinton and Haiti’s prime minister, Jean-Max Bellerive, has been set up to oversee a long-term plan for rebuilding Haiti’s roads, schools and hospitals. Countries and other donors have pledged $5.3 billion this year to help the effort, but only 10% has come through. Clinton told the Associated Press he is frustrated with the slow pace of recovery. He said he plans to phone donors next week to remind them of their promises.

Leo says any kind of plan would be encouraging.

Ultimately, he says, he wants to leave Haiti and raise his daughter in the USA. His parents are U.S. citizens who have started the paperwork.

“That’s all there is in terms of hope for our future,” he says.