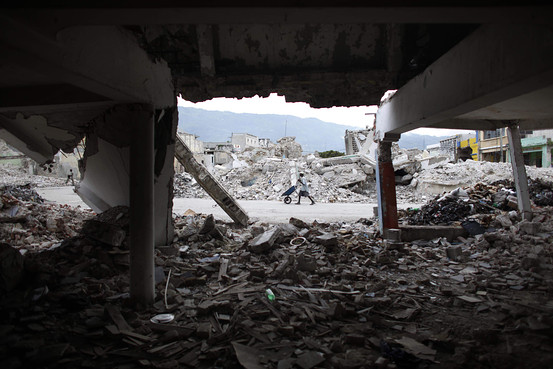 A man passes ruins in June in Port-au-Prince, where rubble is often removed one wheelbarrow at a time. About 80% of the capital’s buildings were destroyed in the Jan. 12 earthquake.

PORT-AU-PRINCE, Haiti—Traffic inches past mountains of rubble. Tropical rains pound refugee camps where hundreds of thousands of people huddle amid the stench of excrement. Buildings marked for demolition lean drunkenly against each other.

Six months after January’s earthquake devastated Haiti, killing some 230,000 people and injuring 300,000, the process of reconstruction appears to have come to a halt.

Billions of dollars in pledged aid have yet to arrive. Decisions on how to spend the money have not begun to be made. An estimated one million Haitians remain displaced. And everywhere, there is rubble.

“After six months, we have not moved an inch,” says Jean-Guy Noél, a businessman who runs a money-transfer service. Adds Gérard Brun, a member of a government commission charged with planning the future of the capital, Port-au-Prince: “Everything is stalling.”

The lines of authority are unclear among the weak Haitian government, the many donor nations and multilateral banks, and myriad government contractors and charitable organizations. Many Haitians complain the government has suffered from a leadership deficit. President René Préval couldn’t be reached to comment.

With European economies in trouble and the U.S. recovery weak, there are growing doubts over the generous financial commitments promised in a first rush of international sympathy.

“I have the sense that the government and the international community have lost the sense of urgency that we had at the beginning,” says Edmundo Mulet, head of the United Nations peacekeeping mission here.

Some Haitian, U.S. and U.N. officials point to the magnitude of the Jan. 12 disaster—the worst natural calamity to befall any one country in modern times, the World Bank says—and say the country has done better than expected. They argue that they have prevented thousands more people from dying in the quake’s aftermath.

“There is no one without basic protection, and there are less and less people in danger zones,” Prime Minister Jean-Max Bellerive said in an interview.

Leslie Voltaire, Haiti’s liaison with the United Nations, says one big achievement is the formation of an interim commission with both Haitian members and representatives of major donors to oversee major countrywide reconstruction projects during the next 18 months. The commission, which was created and received congressional approval in just two months, was seen as necessary before international donors would release rebuilding funds.

“No democratic country could have done that in less time,” he said of the group, which met for the first time two weeks ago.

Progress on setting up commissions, however, offers little consolation for many Haitians.

Dade Kansky, a 45-year-old former welder, lost his shop and house in the quake. He now lives with 500 other families in a small camp on a piece of unused land in the capital. The land’s owner wants the squatters out by next month. “I don’t know what to do,” he says. “I don’t see a good future.”

The rubble is the most visible sign of the lack of progress. The 7.0-magnitude temblor left 20 million cubic meters, or 700 million cubic feet, of debris, the U.N. estimates. Cleanup efforts so far have made a minor dent.

For the most part, organized rubble removal is in the hands of thousands of Haitians who work with picks, shovels and wheelbarrows for $5 a day. While this internationally funded “cash for work” initiative helps to provide jobs and money for unemployed Haitians, it doesn’t do nearly enough to get the job done.

Nigel Fisher, the head of the U.N.’s humanitarian relief program, says the effort requires a massive influx of heavy equipment, and he is searching for $120 million to remove the worst of the rubble from Port-au-Prince.

Little is available for such projects, as most money from donor nations and charities are earmarked for emergency relief—food, shelter and medicine for Haitians.

Delays have plagued resettlement efforts. The government worries that refugees’ tent cities could form the basis for future slums, but until rubble is cleared it is impossible to move people back to old neighborhoods, as the government desires.

One reason the government has had a difficult time dealing with basic issues such as resettlement: It is often impossible to determine who owns homes and land. A decade ago, 97% of rural residents in Haiti and 68% of city residents lacked clear title to their housing, according to a study by Peruvian economist Hernando de Soto.

“Eighty-two percent of real estate and 68% of businesses in Haiti are in the extralegal economy,” says Mr. de Soto, who has offered the information to a U.N. commission on legal empowerment of the poor. He estimates the value of the assets to which no one can claim title at about $5.2 billion, roughly the same amount that has been pledged for the first two years of Haiti’s reconstruction.

The loss of documents in the earthquake makes that situation worse. Most Haitians seeking to start over can’t access bank credit because they have no collateral to offer up. The failure to demonstrate clear title acts as a brake to development, affecting small investors and multinational lenders alike.

Days after the temblor, officials from the Haitian government and the Inter-American Development Bank believed they had found a large piece of land the bank could acquire to build a tent city to house 10,000 displaced Haitians. The U.N. peacekeeping mission here graded the area with bulldozers in preparation.

Two months later, the bank pulled the plug on the $3 million project after it found “the person who claimed control of the land wasn’t the owner,” says Eduardo Almeida, the IADB’s Haiti head of mission.

In an effort to address the land-use and ownership problem, Cheryl Mills, counselor to Secretary of State Hillary Clinton, pressed the Haitian government to assign officials who deal with land matters to the reconstruction commission to streamline solving land disputes and award title when necessary. The commission is co-run by former President Bill Clinton and Mr. Bellerive, the prime minister, with significant matters subject to Mr. Préval’s final approval.

But land is a tricky political issue in Haiti, which was the world’s first black republic when it was founded in 1804 after a slave revolt against France. Founder Jean-Jacques Dessalines prohibited whites from owning property. Today, mistrust of foreigners lingers.

Haitian officials say privately that President Préval has balked on giving the commission broader powers over land rights. A top Haitian official said Mr. Préval believes it isn’t politically advisable for a commission, half of whose members are foreigners, to be final judge of land issues “in the land of Dessalines.”

According to Haitian officials, the international community is withholding money to build some 125,000 temporary housing units, enough for about half a million people, until the land issue is solved.

Advisers to Mr. Preval said Haiti, using its established legal procedures, had carried out an inventory of available lands and, using the right of eminent domain, expropriated a number of plots large enough to resettle everyone in need of relocation, but the government had not received any formal requests to build projects on any of those lands from the international community.

The World Bank estimates the quake caused $7.3 billion in damage, about 130% of GDP. The bank estimates Haiti will need a decade and more than $11 billion to rebuild. Within days after the earthquake, the United Nations raised some $960 million, of which it has spent about $357 million on relief operations.

There is no tally of private-sector donations, but they likely add up to at least $2 billion: The International Red Cross alone has raised $900 million it says it will spend on Haiti.

At a U.N.-sponsored conference in New York in March, donors pledged an additional $10 billion for reconstruction, with $5.3 billion aimed at the first two years of the process. But pledges have been slow in arriving.