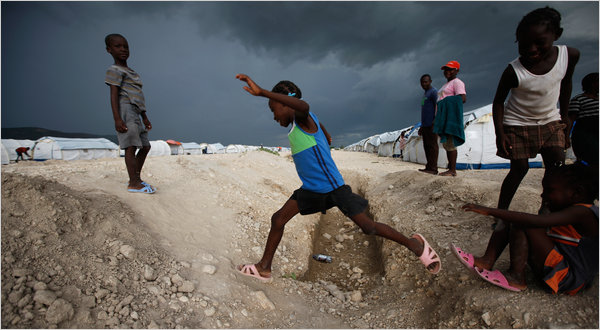 Haitians jumped across a ditch at the site of a planned tent city called Corail Cesselesse that is meant for those who are most at risk from flooding or landslides at a camp in Petionville.

Heavy wind and rain earlier this week turned the Corail-Cesselesse camp north of Port-au-Prince, Haiti, from a supposed haven for earthquake-displaced families into a disaster site.

The summer storm tore up tents, knocked down solar-powered lights and provoked anger and anxiety in the camp, which was selected by the Haitian government to serve as a safe relocation site for thousands of people deemed at risk from flooding and landslides elsewhere.

About 1,700 of 7,000 Haitians who had agreed this spring to move from Port-au-Prince to Corail-Cesselesse, a remote camp in an inhospitable location, lost their shelter to the storm on Monday. About six people were hurt by debris that flew across the exposed desert plain where rows of family-size tents sat in a grid on a graveled surface.

A mother and baby were struck by lightning, said the camp manager, Richard Poole. The woman was badly burned, and the baby, taken away by ambulance, was reported by Haitian radio to have died.

Striking six months to the day after the Jan. 12 earthquake, the storm underscored for the camp’s residents just how vulnerable they remain. Reported by the Haitian media, it also broadly undermined faith in the country’s readiness for the hurricane season.

“I think this is a fair warning,” Leonard Doyle, spokesman for the International Organization for Migration, said Wednesday. “What happened was essentially a squall that led to some 344 tents being ripped asunder or damaged. One shudders to think what would happen when a proper storm arrived.”

Jocelin Belzince, a tailor and resident of the camp, said that the storm had sent a message. “Nature came and said Corail is not a good place for tents,” he said in a telephone interview. “They should not defy nature.”

Immediately after the storm had passed, international groups scrambled to replace destroyed and damaged tents with new ones, even as they prepared to move thousands more displaced people to tents on an adjacent lot.

But the storm also seems to have accelerated a plan to build sturdy transitional shelters for the camp’s residents. Mr. Doyle said construction could begin as soon as Thursday.