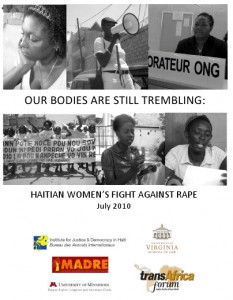 IJDH released a major report Tuesday, the first of its kind to focus exclusively on the crisis of rape and other violence against Haitian women and girls. The report describes the prevalence of rape in displacement camps, and the failure of the Haitian government, the United Nations, and other members of the international community to mount an effective response. The report also gives voice to the many grassroots women leaders who are fighting for their right to live free from violence.