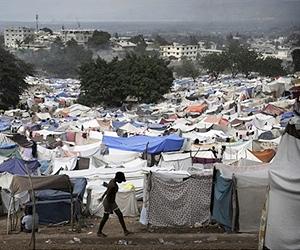 Those killed on Friday included two young girls and a 93-year-old woman who lived in close quarters with the tens of thousands of people left homeless by the powerful January 12 quake that devastated this impoverished Caribbean nation, said civil protection official Nadia Lochard.

She said thousands of tents had been torn apart by the freak storm and the strong winds and heavy rains it dumped in a matter of hours on Port-au-Prince, still filled with rubble more than nine months after the quake.

“Thousands of tents have been destroyed or damaged or simply blown away by wind gusts. We began evacuating people to schools and other shelters,” said Lochard.

Several other cities were also hit by the storm, prompting officials to fear a higher toll.

US meteorologists said the storm was not linked to any tropical storm system.

Meanwhile Tropical Storm Matthew killed seven people in Venezuela and brought fresh misery to Central America, where hundreds have been killed in flooding and landslides this year. Tens of thousands of people were evacuated throughout the region.

In Port-au-Prince strong winds blew roofs off houses, uprooted trees and toppled power lines. Tents were blown away at a refugee camp near the presidential palace, and the wind knocked over public toilets, victims said.

Dozens of residents of tent dwellers protested steps from the presidential palace, which was also leveled in the quake.

“We were unable to enter this camp to evaluate damage. People were angry,” a civil protection agent explained.

Haitian officials said UN soldiers and Haitian police were helping them evacuate people whose shelters were destroyed or uprooted by the wind gusts, setting up hard plastic shelters for the displaced.

International groups treated many of the wounded. Others were transported to hospitals, according to a foreign doctor who declined to provide a toll of the victims.

Although the rain has stopped in Port-au-Prince, forecasters warned fresh storms could lash the already battered nation again in the coming days.

January’s quake killed 250,000 people, left 1.3 million homeless and destroyed much of the capital.

Some 125,000 Haitian families were put up in the emergency camps following the quake.

Tent cities have sprung up in and around the ruined capital of the poorest country in the Americas, with little sign that those left homeless and destitute will move into more permanent housing in the near future.

International aid has been slow in coming, with only a fraction of the funds promised for rebuilding efforts actually disbursed.

Earlier in the hurricane season, the United Nations identified 130 tent cities as being at risk from rains and winds that could further worsen conditions for the most vulnerable, including thousands of orphaned children.