Who benefits when refugees are moved from camps into garment and cell-phone industry “work zones?” 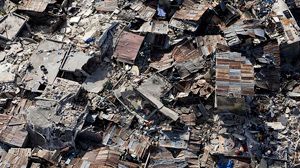 Refugee evictions, private land grabs, disaster capitalism—you can’t tell the story of Haiti without all this. Eight months after the earthquake, many of the 1.7 million Haitians living under tattered tarps in squalid squatter camps around Port-au-Prince are being forced to abandon the tent cities they’ve set up on privately owned land. Meanwhile, businesses—eager to slurp up the spoils of disaster—are swooping in to score major paydays by moving the refugees to new camps, some set to operate as industrial work zones. And there’s no one stopping it.

In March, Haitian landowners and police authorities began kicking displaced Haitians out of their makeshift cities at the behest of the owners of the land on which the camps sat. International Action Ties, a grassroots community development agency working in Haiti, says authorities are regularly flushing out the camps. The International Organization for Migration, which heads up the international aid response to the quake, has been unable to prevent expulsions and has been relegated to playing mediator between landowners and camp occupants. A recent IAT report provides a vivid blow-by-blow of expulsions by Haitian police in the communes of Delmas and Cité Soleil: bulldozers demolishing flimsy shelters, policemen swinging batons and shooting their guns in the air, and several cases of sexual assault. IAT skewers the Haitian government and UN system, and blasts the aid community for not defending the refugees (for more, read this report from July).

And there’s a twist: It’s not even clear these landowners officially own the property that the displaced people are being expelled from. Murky titling laws have plagued Haiti since its early days, clouding landowners’ claims with ambiguity and contributing to the country’s current catastrophe. Post-colonial Haiti’s first ruler, Jean-Jacques Dessaline, imposed dramatic land reforms in the early 1800s, apportioning plantation land among freed slaves. But after his assassination, subsequent efforts at reform failed, and military leaders appropriated old plantation land. Land titling gradually became more and more muddled as one dictator gave way to another. In the 1950s and ’60s, François “Papa Doc” Duvalier meted out land to members of his death squads, or left property up for grabs. In the ’80s, another attempt to formalize land holdings failed.

On January 11, 2010, the day before the quake, around 85 percent of Port-au-Prince’s residents lived on property of dubious ownership. “There’s no real registry to show who owns the land,” says Oxfam’s Julie Schindall. “On any given plot, there may be three people asserting themselves as landowners for any given reason.” IAT estimates that some 70 percent of landowners don’t bear title to the property they claim, and it demands a moratorium on evictions until the ownership chaos can be sorted out. In the interim, it’s the responsibility of the United Nations Stabilization Mission in Haiti to protect the human rights of Haitians, according to its mandate. That includes the right to shelter and housing. Haitian law, Schindall adds, clearly bars forced evictions.

The reasonable course would seem obvious: Sort out the legalities and the who-owns-what before ripping down tents and moving the stricken, the sick, and the dying out of the camps. But in March, President René Préval, under pressure from landowners and business elites, ordered aid groups to discontinue food services (though some limited distribution to pregnant women and children continued). This was seen as a move designed to put pressure on camps to disband.

In the absence of government leadership on this issue, businesses and NGOs are filling the gaps—and exploiting the situation. For instance, Nabatec, a consortium owned by some of Haiti’s most powerful families, and World Vision, a Christian humanitarian organization, plan to build a new city of 300,000 displaced Haitians, complete with garment factories, homes, stores, and restaurants. This new business zone will be in Corail Cesselesse, about nine miles from Port-au-Prince. Nabatec owns the land where the refugees will live, and stands to gain a chunk of the $7 million dollars the Haitian government plans to pay landowners who’ve given up property for the site.

“After I take people to Corail [Cesselesse], they don’t sleep well anymore,” says Melinda Miles, director of the aid group KONPAY. “It’s 40,000 people living in the middle of the desert.” She says that Corail Cesselesse, like other camps, has been without proper food distribution for the past two months; children in the camp have orange hair, a symptom of malnutrition. And Nabatec has positioned itself to make a killing as the commercial gatekeeper for private companies seeking to set up shop in Corail, including a South Korean garmet firm and a Vietnamese cell phone company.

With most NGOs not addressing the expulsion issue, many displaced Haitians remain at the mercy of landowners anxious to reclaim their property. They’re caught between an incapable government and a rush of foreign investment looking capitalize on a ruined country—just as hurricane season kicks up.

Siddhartha Mahanta is an editorial intern at Mother Jones.