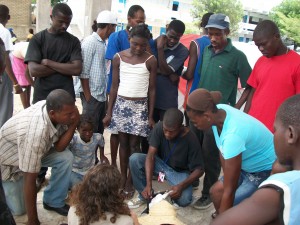 Okay, maybe not…but it may as well.

Paternalism is a constant temptation for those of us who inhabit the privileged echelons of humanity. “I am meeting the needs of some needy person…I can be the one to help them…they are waiting for me to ride in on my white horse and save them…”

The ubiquitous late-night commercials for child sponsorship charities often appeal to this sense of savior-lust. Between enjoying David Letterman’s latest “top ten” list and watching the cartoons of Comedy Central’s “Adult Swim”, viewers are entreated to have mercy on the desperate, poor child who appears on their screen. Soft music plays in the background, flies buzz in front of the camera lens, a do-gooder celebrity walks amid shacks and refuse…and heartstrings are tugged.

Maybe it’s an effective publicity technique—especially for those of us who, by virtue of our upbringing, react strongly to guilt-induction. And yet, I fear it severely limits our perspective.

In May 2010, I spent twenty-four hours in one of the “tent camps” in Haiti that are home to thousands of internally displaced persons. The primary purpose of this visit was to document the conditions in the camp; in addition to Katie Kane, another volunteer with the Bureau des Avocats Internationaux, I was joined by Jude Chan, a filmmaker from Trinidad. With the help of women from the Haitian grassroots organization KOFAVIV, we were provided with a spare tent to sleep in and guided around the camp to interview residents.

As we walked amidst the tents and shanties, the stories we heard bled into one another in a cacophony of desperate humanitarian needs: no drinkable water. No consistent source of food. Flooding and disease. Chronic threats of violence. Spotty, insufficient attention from foreign aid organizations. After the first three hours of interviewing camp residents, I had lost all track of who had said what—practically every respondent was suffering the same litany of hellish conditions.

Had we left immediately after filming these interviews, Katie and I may have left with the traditional mentality intact: the conventional paradigm of “the needy” and “the helpers” would have remained largely unchallenged.

Thankfully, however, we spent the night.

After the camera turned off and our filmmaker headed back to his Port-au-Prince hotel, Katie and I sat with members of KOFAVIV and leisurely chatted. (It’s amazing how much more comfortable people feel once they don’t have a camera pointed at them.) As the light of day slowly waned, other grassroots organizers and camp residents emerged and joined us, sitting on chairs, cinder blocks and overturned buckets.

A mother pig rooted for food nearby as one man brought out his guitar and began to play patriotic songs of hope for Haiti. The atmosphere became decidedly more relaxed as we sang a milieu of Haitian folksongs, Bob Marley tunes and well-known hits from other Latin American countries. Cups of tafia were brought out; I toasted our gracious hosts as children played nearby and families joked and chatted.

As we sang and conversed into the night, I noticed a palpable change in the tone of the evening. No longer were people answering our questions about “what is needed”—rather, they were asking each other, through conversation and song, what Haitians could do to heal Haiti. The songs were not appeals to foreign NGO workers or pleas for help, they appealed to the innate strength of Haiti’s sons and daughters.

More than a touching story of cross-cultural fellowship, our experience illustrated a broader fact—before and after our 24-hour stay in the camp, grassroots organizations such as KOFAVIV were the ones creating solutions to their own problems. It was them who coordinated aid; they were the ones to set up work projects; they were the ones speaking with camp residents and holding meetings to develop collective solutions.

An even simpler truth lies in this story: at the end of the day, no matter whom they are or whatever needs they face, people are just people. Nobody is the helpless beggar depicted in the late-night commercials. Whether they live in a house, apartment or temporary encampment, people everywhere have the same hopes and dreams. They have a sense of humor. They enjoy playing music, dancing and sharing a drink with each other; they have a social life. They have friends, enemies, neighbors, lovers and relatives.

They are not to be pitied.

The men, women and children living in the Croix des Pres camp are exactly like you—except they have no water. They don’t have a permanent place to stay. They often have trouble finding enough to eat. They could use some help putting their lives back together (although they’ve already got a good start on it by themselves, thank you very much). They need your solidarity, your support, and your empathy.

But they do not need your charity.