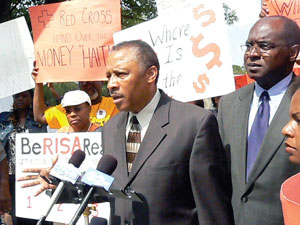 CHICAGO (FinalCall.com) – A coalition of Haitian and Haitian-American activists are questioning the American Red Cross’s strategy is dispersing millions of dollars in relief aid to earthquake ravaged Haiti.

Seven months after the seven magnitude quake struck the island nation, the Red Cross has spent only one-third of the half a billion dollars it collected in donated aid.

That penny-pinching, the coalition claims, has forced Haiti’s one million homeless to linger in unsafe, unsanitary makeshift tent cities. The coalition criticized the lack of permanent housing for earthquake victims.

“When it rains and the hurricane comes, these families are sitting in mud,” said Lionel Jean-Baptiste, of the Haitian Congress to Fortify Haiti. “For there to still be 1.5 million folks under tents made of tarps and cloths, is a reflection that the urgency is not being addressed.”

Of the $468 million the Red Cross has collected for Haiti relief efforts, it has spent $148 million. According to American Red Cross documents, the bulk of money has gone to shelter (35 percent) and food and emergency services (38 percent). The Red Cross could not provide a break down in actual money spent in these areas.

“With the $468 million they have collected a lot more should be done,” Mr. Jean-Baptiste said. “We believe the Red Cross needs to be held accountable.”

The group is urging the American Red Cross to build durable emergency housing and partner with Haitian-led and Haitian-American grassroots organizations to better address the earthquake victims’ needs. The group also seeks a detailed account of funds raised, allocated and spent on Haiti relief efforts.

Historically, Haitian activists have questioned how much non-government organizations (NGOs), such as the Red Cross, have spent on administrative costs versus actual relief, Mr. Jean-Baptiste said.

Red Cross, he added, is the largest recipient of money from the international community without demand for transparency. They escape scrutiny, he said, while “Haitian leadership has always been seen as corrupt.”

The coalition points to the poor response the Red Cross and other aid organizations gave during Hurricane Katrina and September 11, where money for victims was misappropriated as justification for their concerns.

Hurricane Katrina is remembered not just for the devastation the flood waters caused, but for the failure of government and relief organizations, such as the Red Cross to meet basic human needs, said Toussaint Losier, of Rising in Solidarity with Ayiti.

Mr. Losier noted people were herded into the New Orleans Superdome and convention center. Then put on buses and blindly shipped to different parts of the country. These decisions, Mr. Losier contends, were made without including evacuees in the decision-making process.

Excluding people whether it be Haitians or evacuees from the decision-making process of rebuilding “their own communities distances people even further,” Mr. Losier added.

“There is a parallel to that and what we are seeing in Haiti right now,” he explained. 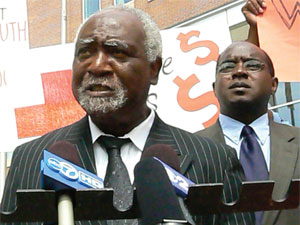 The call for accountability is not isolated to the Red Cross nor is the coalition trying to make the agency the enemy, Mr. Jean-Baptiste said. There are 10,000 NGOs on the ground in Haiti, with little results to show for it. This call for accountability hopes to stress to the American people the dire needs facing Haitians, he added.

State Senator Kwame Raoul, who is of Haitian decent, echoed the coalition’s concerns. Millions of dollars poured into the Red Cross where people believed their money was going to relief efforts not administrative costs, he said.

“When somebody writes a check for emergency relief, they expect that money is going to be spent on emergency relief,” Mr. Raoul said. “I think that is why people are asking for accountability.”

Rep. Danny K. Davis, an Illinois Democrat, understands that distributing resources in the midst of a disaster is daunting. But he noted decisions should be made “expeditiously as possible” to give aid to those impacted the most.

A spokesperson for the American Red Cross of Greater Chicago said the agency is being dutiful in how it spends resources to prevent fraud.

“The fact that we spent only a third of the money that has been donated is great … because we are doing it wisely. We are not spending it as fast as we can,” Martha Carlos, senior manager of marketing and communication, said.

The goal, she added, is sustainability. Instead of providing someone with a bottle of water, the agency wants to provide water treatment systems and other services for the long term, Ms. Carlos explained.

The biggest challenge the agency faces to building permanent structures is securing land. Ms. Carlos said there is no clear way to determine land ownership in order to build housing on private land. Additionally, land is still not cleared of rubble hampering efforts to build housing for 150,000 displaced Haitians.

“In order to build permanent structures, we need permanent land,” she said.

Rebuilding Haiti is an arduous task—something the Red Cross and other international relief agencies cannot do alone. Recognizing that, agency officials said they are working with small nonprofits on the ground in Haiti.

The Red Cross said it provided $3.8 million to Partners in Health, a Haitian-led organization that operates a hospital on the island nation. The Haiti Red Cross is staffed by Haitians, according to the agency spokesperson.

Ms. Carlos noted that officials at the Red Cross national headquarters have worked to identify smaller Haitian groups in Haiti and throughout the Diaspora “to figure out the best way to efficiently help.”

However, the Chicago-based Haitian Congress to Fortify Haiti reached out to the Red Cross offering supplies and services, but was flatly rejected.

Executive director Aline Lauture said her organization “had loads of volunteers”—doctors, nurses and technicians wanting to accompany the Red Cross to Haiti.

“But we were told that they were not taking volunteers outside of the Red Cross,” said Ms. Lauture, who speaks both French and Haiti’s native tongue Creole.

Ms. Lauture just returned from her second visit to the country on Aug. 7. Haiti’s needs are great, but shelter is paramount, she said. Camps are jammed with upwards 2,500 people. These tent cities are inadequate for people recovering from traumatic wounds such as amputation. There has been talk of placing families in shipping containers, she added.

“That is not good,” Ms. Lauture said.

Alia Kabba, executive director of the United African Organization, also stressed the urgency for the Red Cross to partner with and release funds to Haitian-led and Haitian-American grassroots organizations. The UAO is a coalition of several African national organizations.

Grassroots organizations will be the ones left behind to rebuild their nation long after America’s attention span has moved on to other issues, said Mr. Kabba.

“History has taught us that no meaningful progress will take place without the active engagement of Haitians in the reconstruction efforts,” Mr. Kabba said.

Some progress has been made in partnering with Haitian groups, Mr. Losier contends. His group has been pressing these issues since March. The group will continue to monitor the Red Cross and connect with other organizations to see if the Red Cross is holding up its end of the bargain.

“But they haven’t made progress in increasing the provision of housing for people and for being transparent in terms of the funds they are spending on administrative overhead,” Mr. Losier said.