Haitians Cry in Letters: ‘Please — Do Something!’ 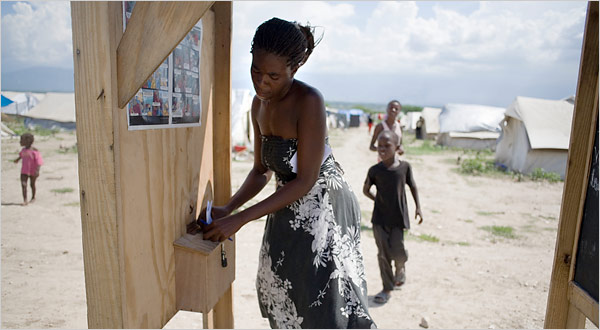 CORAIL-CESSELESSE, Haiti — It was after midnight in a remote annex of this isolated tent camp on a windswept gravel plain. Marjorie Saint Hilaire’s three boys were fast asleep, but her mind was racing.

The camp leader had proposed writing letters to the nongovernment authorities, and she had so much to say. She lighted a candle and summoned a gracious sentiment with which to begin.

“To all the members of concerned organizations, I thank you first for feeling our pain,” she wrote slowly in pencil on what became an eraser-smudged page. “I note that you have taken on almost all our problems and some of our greatest needs.”

Ms. Saint Hilaire, 33, then succinctly explained that she had lost her husband and her livelihood to the Jan. 12 earthquake and now found herself hungry, stressed and stranded in a camp annex without a school, a health clinic, a marketplace or any activity at all.

“Please — do something!” she wrote from Tent J2, Block 7, Sector 3, her new address. “We don’t want to die of hunger and also we want to send our children to school. I give glory to God that I am still alive — but I would like to stay that way!”

In the last couple of weeks, thousands of displaced Haitians have similarly vented their concerns, depositing impassioned pleas for help in new suggestion boxes at a hundred camps throughout the disaster zone. Taken together, the letters form a collective cri de coeur from a population that has felt increasingly impotent and ignored.

With 1.3 million displaced people in 1,300 camps, homelessness is the new normal here. Two recent protest marches have sought to make the homeless a central issue in the coming presidential campaign. But the tent camp residents, miserable, weary and in many cases fighting eviction, do not seem to have the energy to become a vocal force.

When the International Organization for Migration added suggestion boxes to its information kiosks in scores of camps, it did not expect to tap directly into a well of pent-up emotions. “I anticipated maybe a few cranky letters,” said Leonard Doyle, who handles communications for the organization in Haiti. “But to my absolute, blow-me-down surprise, we got 700 letters in three days from our first boxes — real individualized expressions of suffering that give a human face to this ongoing tragedy.”

In some cases, the letters contain a breathless litany of miseries, a chain of woes strung together by commas: “I feel discouraged, I don’t sleep comfortably, I gave birth six months ago, the baby died, I have six other children, they don’t have a father, I don’t have work, my tarp is torn, the rain panics me, my house was crushed, I don’t have money to feed my family, I would really love it if you would help me,” wrote Marie Jean Jean.

In others, despair is expressed formally, with remarkable restraint: “Living under a tent is not favorable neither to me nor to my children” or “We would appreciate your assistance in obtaining a future as one does not appear to be on our horizon.”

And some tweaked the truth. Ketteline Lebon, who lives in a camp in the slum area called Cité Soleil, cannot read or write. She dictated a letter to her cousin, who decided to alter Ms. Lebon’s story to say that her husband had died in the earthquake whereas he had really died in a car accident. “What does it matter?” Ms. Lebon said, shrugging. “I’m still a widow in a tent with four kids I cannot afford to send to school.”

At this camp’s annex, Corail 3, Sandra Felicien, a regal woman whose black-and-white sundress looks as crisp as if it hangs in a closet, has become the epistolary queen. An earthquake widow whose husband was crushed to death in the school where he taught adult education courses, Ms. Felicien said she wrote letters almost daily because doing so made her feel as if she were taking action. “We are so powerless,” she said. “It is like we are bobbing along on the waves of the ocean, waiting to be saved.”

Like the hundreds of families around her in Corail 3, Ms. Felicien and her small son lived first in Camp Fleuriot, a mosquito-infested, flood-prone marsh where many were feverish with malaria or racked by diarrhea. In July, they were bused here to the outskirts of this planned settlement, which is supposed to become a new town someday.

Transitional shelters are being built in this remote spot, and a hundred or so are completed and stand empty. For the moment, though, the one-room houses, like the tents beside them, exist in a sun-scorched vacuum beneath deforested hills. They are surrounded only by latrines, showers and the information kiosk, with its blackboard, bulletin board and suggestion box.

One afternoon last week, Ms. Felicien settled onto the tarp-covered rocks in front of her tent — “my porch” — and used a covered bucket for a writing desk. She was feeling robust, she said, because a neighbor had just treated her to what amounted to brunch — a pack of cookies that she had shared with her son.

She started to recopy the rough draft of a letter that she had written that morning. She was writing in Creole, although her French is impeccable, because “only a Haitian could really understand,” she said.

While she wrote, with a reporter by her side and a photographer taking her picture, a boisterous crowd from the camp gathered, concerned that she was getting special attention from foreigners. Their complaints grew so deafening that she rose to address them, explaining that, in fact, the particular letter she was writing was not personal but on behalf of all her neighbors.

Raising her voice to be heard, she read aloud the letter: “Sept. 14. Today we feel fed up with the bad treatment in Block 7. Have you forgotten about us out here in the desert?” The crowd quieted. She continued reading: “You don’t understand us. You don’t know that an empty bag can’t stand. A hungry dog can’t play.” Other tent camps have health clinics or schools or at least something to do, she read. “Why don’t we have such things? Aren’t we people, too?”

Heads nodded. The tension dissipated. The crowd dispersed. Ms. Felicien walked her letter to the kiosk to post it. “I don’t know why I keep writing,” she said. “To this point they have not responded. It’s like screaming into the wind.”

Mr. Doyle said that all the letters are read, some aloud on Radio Guinen, which broadcasts daily from tent camps as part of an International Organization for Migration communication program. But the $400,000 program was intended to give voice to the voiceless and not food to the hungry or money to the destitute. So unless the writers express a need for protection, as from rape or abuse by camp leaders, their individual requests are not likely to be answered.

Told this, Ms. Felicien said, “Ay yi yi” and shook her head. And then she posted her letter all the same.