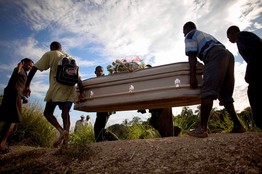 The death toll from a cholera epidemic in Haiti topped 250 Sunday, and a handful of cases in the country’s capital were confirmed, as government officials and aid groups prepared for what they call an inevitable spread of the disease.

Six cases were confirmed in the Port-au-Prince area, said Ariel Henry, chief of staff at the Haitian Ministry of Health. All were travelers from the Artibonite Valley, a rural region north of the capital where the outbreak appears to have originated, so the new cases don’t indicate the disease is spreading to Port-au-Prince.

But Dr. Henry said he expected cholera would begin spreading to the city in the next week. “I have no doubt that it will arrive in Port-au-Prince, because people are moving a lot,” he said Sunday. “It will arrive during the next week probably.”

All told, he said about 253 deaths and 3,115 hospitalized cases were reported in the Artibonite Valley in the first major disease outbreak in the country since the Jan. 12 earthquake. Reports of suspected cases in the Artibonite, Port-au-Prince and elsewhere poured in over the weekend, including 45 ill in Arcahaie, between Port-au-Prince and the northwestern coastal city of St. Marc, where many of the cases have been reported.

Governments and humanitarian-aid organizations are deploying medical teams, supplies and clean water to treat the sick and to try to contain the outbreak. The Haitian government is preparing a health-education campaign to minimize the spread of the disease, Dr. Henry said.

Both Haitian officials and aid groups are most concerned about keeping cholera out of the squalid tent cities where more than 1.3 million displaced earthquake survivors are living around the capital. While those camps are supplied with clean water and sanitation, the massive numbers of people living in them stretch those systems.

Cholera, an acute diarrheal disease caused by infection of the intestine with the bacterium vibrio cholerae, can be spread when food or water becomes contaminated by the feces of an infected person. It rarely spreads from person to person.

Health experts are trying to contain the spread of the disease by providing clean water to affected communities so that residents don’t drink from contaminated sources or use them to prepare food and wash. They are also urging people to wash their hands carefully.

In a statement Sunday, the organization Doctors Without Borders said it has treated some people in its Port-au-Prince facilities suffering from watery diarrhea, a cholera symptom.

“At this stage, cholera infection among the patients has not been confirmed,” it said. The organization stressed that diarrhea has been common since the earthquake. Still, it is preparing for potential cholera cases at its Port-au-Prince facilities.

There has been a slight decrease in the number of people coming in to the 200-bed St. Nicholas Hospital in St. Marc, which has borne the brunt of cases, according to Partners in Health, a Boston-based organization that has provided health care in Haiti for more than 20 years. “There has been a slight trend toward people in less severe stages of dehydration,” Chief Medical Officer Joia Mukherjee said. “To me that means our community-based strategy is working.”