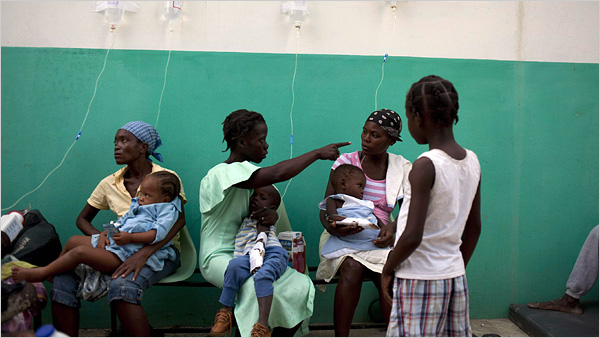 MEXICO CITY — With the number of dead rising above 200, health officials battling a cholera outbreak in Haiti grew ever more pessimistic Saturday that the disease could be contained to a rural area and braced for a medical disaster in the capital.

Haitian officials have confirmed 208 dead and a total of 2,674 cases, but with people streaming into hospitalsand clinics and suspected cases far from the outbreak’s epicenter — in St.-Marc, 60 miles north of the capital, Port-au-Prince — doctors were certain the toll would rise.

“The numbers will go up,” Imogen Wall, a spokeswoman for the United Nations Office for the Coordination of Humanitarian Affairs, said by telephone from Port-au-Prince.

An International Red Cross spokeswoman, Sophie Chavanel, who arrived Friday night in St. Marc, said by telephone Saturday that doctors and nurses were rushing about, trying to treat people weakened with the severe vomiting and diarrhea that are the disease’s hallmarks.

“It is difficult to see,” said Ms. Chavanel, part of a team bringing drinkable water, water purification kits, plastic sheets, tents, mattresses and other supplies to the area. “It is really heartbreaking, actually.”

Health officials were investigating cases in several towns near Port-au-Prince, where 1.5 million people displaced by the January earthquake live in tent encampments in which cholera, a bacteria carried in human feces, flourishes.

The Associated Press reported that those suffering from the disease included 50 inmates in the Mirebalais prison, about 30 miles northeast of Port-au-Prince.

Haitian media and accounts on Twitter suggested there already were suspected cases of cholera in Port-au-Prince, but Ms. Wall said Saturday morning that there was no confirmation that the disease had reached the capital.

It is possible that people with diarrhea caused by other germs suspect they have cholera, an acute bacterial infection that results in a far more severe form of diarrhea that quickly dehydrates and kills its victims unless they are treated, primarily with plenty of water andantibiotics, at the onset.

Authorities have braced for months for water-borne diseases in Haiti, given persistent sanitation problems. But they were not preparing specifically for cholera, which last appeared in Haiti 50 years ago.

There are an estimated three to five million cholera cases and 100,000 to 120,000 deaths every year worldwide, according to the World Health Organization. Outbreaks have been reported this year in Cameroon, Chad, Niger, Nigeria, Pakistan, Papua New Guinea, and Zambia.

Ms. Wall and representatives of relief organizations said there was enough clean water for the sick and, for the most severe cases, antibiotics for now. A public awareness campaign aimed at getting people to diligently wash their hands after going to the bathroom is under way.

But a major concern is that Haitians, who fled the capital in droves after the earthquake for places like St.-Marc, often go back and forth and from village to village to live with or see relatives, raising the likelihood that the disease will spread.

“Our single greatest challenge is containing this,” she said.

Andrew Marx, a spokesman for Partners in Health, a nongovernmental organization that works closely with the Ministry of Health in rural areas, said that it had been warning of such a calamity away from the capital but that authorities had focused disease prevention mostly on Port-au-Prince.

“We tried to make the case not to focus exclusively on Port-au-Prince,” he said, noting that considerable effort has been made to provide clean water in the capital, but rural areas remain lacking. The St. Marc River has tested positive for the cholera bacteria,

Relief workers said rural hospitals and clinics were overwhelmed, particularly in St. Marc. “There are significant numbers of patients in St. Nicholas Hospital in St. Marc, which does not have the capacity to handle a cholera emergency,” Federica Nogarotto, a Doctors Without Borders emergency coordinator in St. Marc, said in a statement.

She said that it was important to keep those with cholera away from other patients, and that work was under way to set up an isolated cholera treatment center.

Relief workers said additional supplies were being flown in, in anticipation that the number of cases would spiral upward.