Why desperate Haitians want to kick out UN troops

By Isabeau Doucet, The Guardian 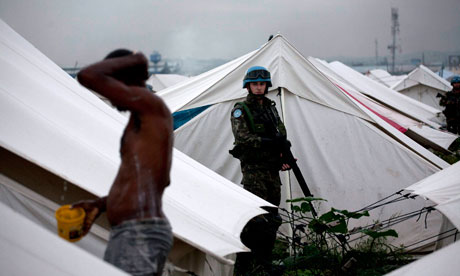 You may have heard about the civil unrest in Haiti over recent days, on the heels of a hurricane that thwarted efforts to contain a cholera epidemic that is now a national emergency. All this may fit the image often painted of this much-maligned country: crushing poverty, endemic corruption, the threat of violence so constant that international peacekeepers are required to stop Haitians tearing each other apart.

Well, the poverty and the corruption may be true. But on Thursday, demonstrations calling for the departure of the UN troops, known as Minustah, will be held throughout Haiti’s capital, Port-au-Prince, by students, grassroots organisations, opposition groups excluded from the elections, and – most importantly – citizens united by a common cause: that Haiti’s escalating nightmares must end now.

As deaths from the cholera outbreak soar past 1,000, fear is taking hold in neighbourhoods that have been so deprived of any civic investment that sanitation infrastructure often amounts to little more than open sewers filled with rubbish and human excrement.

Despite the billions of dollars in international aid that flowed into this country before the earthquake, these neighbourhoods can be found in any town or city across Haiti. Ten months and more billions later, things are much worse, and after suffering in relative silence, with elections just a fortnight away, many here, it seems, have now had enough.

Chants such as “We refuse to vote while living under tarps”, have been replaced with “UN peacekeepers and cholera are brothers”. The difference now is that in some parts of the country the songs are accompanied by burned-out cars, flaming tyres, broken glass and the coffins of cholera victims blocking movement, forcing aid workers to suspend operations and leaving people to die in the street.

Many accuse the Nepalese UN troops of dumping cholera-infected fecal matter into the Artibonite river, and are now demanding the departure of all UN forces. Officials claim the protests are a politically motivated attempt to disrupt an election timetable they continue to cling to in the face of disaster. If the vote is ultimately postponed, as it surely should be, the international media will no doubt dismiss Haitians as unfit for democracy, still in the grips of Duvalierest dictatorship or too deeply entrenched in anarchy to organise and manifest their popular will.

It’s a familiar pattern – in the 1980s, when Aids first came to the world’s attention, Haitians were stigmatised as one of the four Hs – homosexuals, hemophiliacs, heroin users and Haitian – having brought the disease to the US. But, like cholera, Aids was not indigenous to Haiti and is only now ravaging the country because somebody else brought it in. And, while Haitians face stigmatisation from their neighbours once again, the world must take its share of the blame.

The real question is: why? Why is there crippling poverty? Why no water, sanitation or medical infrastructure?

A decade ago, money was in place to address the country’s failing water system. In 2000, a $54m (£34m) loan from the Inter-American Development Bank (IDB) should have given the Haitian government means to rehabilitate its urban and rural water systems, but US foreign policy objectives of destabilising the democratically elected Aristide government got in the way. Sources have suggested the US government asked the IDB to block the loan, as well as others totalling $146m for investment in health, education and sanitation infrastructure, while electoral disputes were worked out, yet the aid freeze continued after they were resolved. A UK study from 2002 still rated Haiti’s water as the worst in the world.

An independent investigation should be carried out on the Minustah latrines, but ultimately it could have been anyone – conditions were ripe for cholera because international policy towards Haiti hasn’t changed in decades. Economic exploitation, political intervention, NGO gifts with chains attached, media misrepresentation, the same mistakes have been made over and over again. Sadly, even an earthquake doesn’t seem to have changed that. It’s little wonder Haitians are manifesting their anger in increasingly heated protests.