An Election That Shouldn’t Happen, but Must Happen

Can Haiti overcome a plethora of logistical challenges to ensure a free and fair vote? 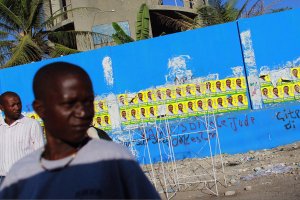 Pierre Esperance wants to vote in Haiti’s presidential election this Sunday, and international observers concerned about low turnout ought to be able to count on him doing so. Esperance is the executive director of a Haitian nonprofit called the National Network for Defense of Human Rights. As such, he has no shortage of interest in who the country’s next leader will be.

But Esperance does not expect to cast a ballot. Five years ago, he registered with the government to receive one of the national identification cards that Haitians must present at the polls. He says he still hasn’t gotten it. “I don’t want to do any special thing to receive it, but … this is the situation,” Esperance says. “Many people cannot go to vote” because they too don’t have ID cards, he says.

In advance of an election that will decide the direction of Haiti’s government at a crucial time in the country’s history, the impact of a worsening cholera outbreak has seized the headlines. Yet as early as this past June, U.S. officials were more concerned about an entirely different election issue: logistics, of which providing voters with ID cards is only one. The extent to which Haiti can facilitate a fair and free vote will determine much about the new government’s credibility. Is the nation prepared to do that on Sunday? With little empirical evidence available, it depends on whom you ask.

Following the catastrophic earthquake last January, Haitians and international aid groups had a laundry list of tasks to complete ahead of the Nov. 28 election. The government needed to re-create lists of registered voters buried in the rubble. It had to replace thousands of lost identity cards, rebuild or move polling places, and ensure security and transparency on Election Day—all on a tight schedule leading up to a vote that the disaster had already delayed. “Even under perfect conditions, contesting elections in 2010 will be challenging for Haiti,” Sen. Richard Lugar, ranking member of the Senate Foreign Relations Committee, wrote on June 10.

By official accounts, Haiti has made at least adequate progress on these fronts. The Organization of American States, which is tasked with monitoring the vote for any incidents of fraud, said on Nov. 19 that preparations for the election were “on track.” “Everything is going according to schedule,” says a senior official in the U.S. Embassy in Haiti. Ballots have been printed; lists of eligible voters have been compiled. Both are expected to be ready at the various voting centers across Haiti’s 10 provinces, where voters will show their ID cards, cast their ballots, and dip their fingers into indelible ink.

Still, other pieces of the puzzle are still just coming together—perilously close to Election Day. OAS said training of supervisors to monitor voting centers was “ongoing” at the end of the last week. The distribution of national ID cards, the ones Esperance claims many Haitians are still missing, “will undoubtedly continue until the last possible moment,” OAS said in its Nov. 19 statement. (For the record, the U.S. Embassy official said reports about Haitians losing ID cards in the earthquake were overblown: “This is kind of like their driver’s license,” the official says. Haitians “are not going to not have it on them if they’re fully dressed.”)

Even for Haitians who have their ID cards, voting could be a hassle. Imagine the potential problems a person might encounter when he or she tries to find the correct voting center. The polling place where that person voted in the last election might have been destroyed in the earthquake. If the person is living in a temporary camp somewhere far away from his original home, the nearest polling place might not have him on the rolls (to prevent fraud, each Haitian’s name must appear on the list in only one polling place). Transportation is difficult in Haiti, so a trip to the wrong place on Sunday might mean that the person won’t have time to cast a ballot in the right one.

The Haitian government and its international helpers say they are trying to remove these roadblocks. Part of the $14 million the U.S. has dedicated to the election has been spent on educating voters about the correct place to vote and making sure their names will be on the list when they arrive. But some observers claim that voter-education efforts have fallen short. “What we’re hearing on the ground is that those organizations [charged with voter education] are just kind of shams, that they’re not making any educational outreaches,” says Nicole Phillips, who is monitoring the election for the Institute for Justice & Democracy in Haiti.

Haiti’s authorities also have to contend with other factors—outside the expected culprits of apathy and, perhaps, despair—that might keep voters away. Haitians might stay home for fear of the spread of cholera, which has now reportedly killed more than 1,250 people, even though cholera is usually spread by eating contaminated food or water, not by casual contact.

Questions about the United Nations’ ability to maintain security during the elections arose last week after violence also broke out in the northern part of the country. Demonstrators opened fire on U.N. peacekeepers in the wake of a rumor that U.N. forces caused the cholera outbreak. These events are “not by any means something that you would want a week and a half or two weeks before elections,” says the U.S. Embassy official.

But Haiti is currently without a functioning Parliament, leaving routine government business to languish, and long-discussed reforms, such as the establishment of an independent judiciary, completely off the table. And so the polls will open, whether Haiti is ready or not.