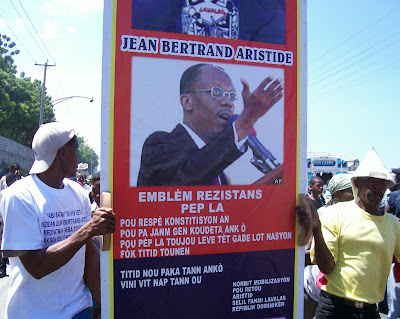 As the date for Haiti holding its General Elections approaches, more political leaders speak out over the credibility of the upcoming Elections. Many national and international political leaders, especially United States lawmakers, like D-Congresswoman Maxine Waters –other forty-four members of the US Congress –and the Rep-Senator Richard G. Lugar Fanmi Lavalas (FL), Haiti’s largest and most popular political party reiterated its position to boycott the Nov. 28 elections. Coming out on his silence, the FL’s National Representative, President Jean-Bertrand Aristide denounced the electoral process and the exclusion of his party in the race. President Jean-Bertrand- Aristide breaks His Silence .

In an exclusive interview conducted by filmmaker, Nicolas Rossier in Johannesburg, South Africa, Fanmi Lavalas National Representative, President Jean-Bertrand Aristide denounced the Nov. 28 Presidential and Legislative Elections. President said, “Last year, we observed them saying that they wanted to have elections, but indeed, they had a selection and not election… today, it’s again like the same.” For the FL leader, the ‘CEP and the Haitian Government’ have do not intend to organize free, fair and democratic elections. “They have no intention to organize free, just and democratic elections… they expect to have a selection. They excluded Fanmi Lavalas which is the party of the majority… it’s like in the United States you could organize elections without Democrats,” said President Aristide.

President Aristide was asked his point of view about the defunct candidacy of Wyclef. Aristide replied, “Wyclef came as an artist to run as a candidate, and it was a good thing for those who refuse elections… because it was for them an occasion to allow a ‘media circus’ to hide the real problem, which the exclusion of the majority… this is my point of view of the reality. ”

Haiti held its first free and democratic elections on December 16, 1990 in which Aristide was first elected President. December 16 remains an important date in the political history of Haiti. Former President Aristide as he frequently does, recalled the 1990’s elections to express the ‘desiderata’ or aspiration of Haitian people to forever and ever to give their country another direction. A new political era took place… it was democracy. “The first time Haiti had free, just and democratic elections, was in 1990, when I elected. Then we wanted to go from elections to elections,” he explained.

President Aristide criticized the Haitian elite for whom elections seem to be a nightmare. The Haiti’s elite class is well-known for its participation in coup d’états. President Aristide may be right when he criticizes the Haitian elites of being anti-election or “election-phobia,” when he was one of the victims of this class as a President. In September 11, 1991, the elite financed the first coup d’état against him – and in February. 29, 2004, this time the elite openly participated along with foreigners who exiled him in South Africa.

President Aristide explained, “In 2004, we moved towards a real democracy, and they said no. the Haitian minority – the political elite and economic fear free, just elections… and nor their foreign allies want election in Haiti. That is why they excluded Fanmi Lavas.” President Aristide added “As long as they refuse to respect the right of each citizen to participate in the free, just and democratic elections, the will not solve the problem.”
The exclusion of FL from the elections is a sophism emphasized President Aristide. President argued that the argument, on which the Provisional Electoral Council based to bar FL from participating in the 2009 and upcoming elections, is a flawed argument. “Not having Fanmi Lavalas in an election because it’s a sophism,” said President Aristide.

He recalled the letter that the CEP sent to him, asking him to take part in a meeting and his response to the CEP. President Aristide believes his response to the CEP was a smart move and a defeat for the CEP.
Aristide explained “wow it’s great. I am ready,” referring to his desire to return home to Haiti. Further, as the former President explains the letter sent by the Haitian government at the time, claimed, “If you can’t come, designate someone in behalf of your name.” Aristide responded “Then I publically answered and asking Dr. Maryse Narcisse to represent the Fanmi Lavalas’ candidates based on the letter that I received from the CEP… but they refused because it was their trick to send me the letter assuming that I would not respond. Then they could tell the Haitian people, ‘ Listen, he does not want to participate in the election.’ So, they used a pretext to believe that they are intelligent, but in reality this was to hide the truth.” Political trickery was used by Preval and his regime to keep Fanmi Lavalas from participating.

The ‘cholera outbreak’ in Haiti that already killed over 600 people may be an imported disease. Research showed that cholera is originally from East Asia, a region that includes Nepal. The Nepalese troops are based in the Down Plateau where the Artibonite River flows to the Dow Artibonite. The first and most cases of the cholera have discovered amongst of people in the regions listed above. That means, there may be a certain truth that cholera is an imported disease.

President Aristide first speculated about the origin of the cholera and then blamed those who organized the Feb. 29 coup d’état against him. “ Concerning the cholera incident, if yes or no it was imported – as critiques strongly suggested. Before all, those who organized the 2004 coup d’état /kidnapping paving the way for the invaders, now accused of being the cause of the recent cholera epidemic, must also share the blame,” Said former President Aristide.

President Aristide also pointed out that the widespread of the cholera is “ a structural order, rooted in the historical impoverishment of Haiti… the marginalization and exploitation in the years of 1980s.” he denounced the wiping out of the Creole pigs, and the destruction of the national rice industry by American rice industry – for which President Bill Clinton apologized. To finish President Aristide denounced the so-called, “friends of Haiti” who in 2003 blocked a loan approving by Inter American Development Bank/ IDB to his government. The loan and four others were to disinfect the Water of the Artibonite. “The loan and four others were blocked as part of a calculated strategy by so-called the friends of Haiti in order to weaken our government and justify the coup d’état,” he concluded.

The FL’s Leader reiterated his position to succumb or accept under the choice of the people.” first they (people) want my return. I respect that. If today they want to change, it be according to their will. It’s democracy,” stated President Aristide.

Meanwhile, many political parties oppose to the elections continue demanding the cancelation of the Nov. 28 elections and a new CEP to organize free, fair and democratic elections. It seems almost uncertain that these elections will take place, but the CEP and the government have desperately tried to insure that the schedule for the lections remain the same. Some FL’s supporters like Rene Civil, Jacques Matelier and others, are backing alternative candidates running in the election, the most popular of these alternatives being: Jean-Henry Ceant. But, in all likelihood it appears that local and transnational elites active in the country have been able to sideline (once again) Haiti’s excluded masses-by not allowing Fanmi Lavalas to run in the elections. The election then serves as a facade for continued elite domination and the exclusion of attempts by the poor to organize.

The cholera epidemic is widely believed to be imported by UN soldiers in Haiti and has killed over 600 people. Meanwhile, there is little faith in CEP chosen by the Government to organize fair, free and democratic elections. One million of Haitians appear forgotten under the makeshift tents eleven months after the earthquake ruined the country as non-governmental organizations and the UN continue to hover around the country’s man-made and natural disasters.

Special thanks to filmmaker, Nicolas Rossier who conducted the interview.