Demonstrators, police clash in the wake of Haiti’s elections 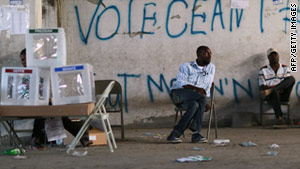 The incident took place as one of the 18 presidential candidates was denouncing the outgoing president and his endorsed candidate in a news conference broadcast live on Haitian radio.

“I have a message for [Rene] Preval and his acolyte,” said Michel “Sweet Mickey” Martelly. “Haiti doesn’t want you any more.”

As he spoke, hundreds of people, chanting Martelly’s name, jogged toward the center of Port-au-Prince until they were intercepted by riot police.

The tide turned when police fired several canisters of tear gas into the crowd, sending Martelly’s supporters sprinting for cover.

On Sunday, hours before the polls closed, Martelly and 11 other candidates for president made a joint declaration denouncing the election and calling for its cancellation. The candidates accused Preval of organizing widespread fraud in favor of his Unity Party, which is fronted by establishment candidate Jude Celestin.

The dissenting candidates did not offer evidence to back up their claims.

Senior officials from Haiti’s election organizing committee, the Conseil Electoral Provisoire, defended the vote and calling it a success.

“The election day has successfully concluded,” said the committee’s director general, Pierre Opont, in a news conference Sunday night. Opont said there had been incidents at 56 polling centers out of a total of 1,500 across the country, less than 4 percent. He also said at least one person died as a result of election violence.

However, there were widespread reports Sunday of disorganization and some cases of apparent cheating at the polls.

“We had observers in about 50 polling stations, and in each one we interviewed countless individuals who could not vote at that polling station because their names weren’t on the electoral lists,” said Nicole Phillips, staff attorney with the non-profit organization Institute for Justice and Democracy in Haiti.

“If we go ahead and certify the elections,” Phillips said, referring to international donors that have helped fund the vote, “then we look bad. We paid for these elections. We organized them. We trained the people. And the fact that it was horrible yesterday looks bad on us.”

On Sunday, the United Nations issued a written statement expressing “deep concern at the numerous incidents that marred the elections.”