Haitians prepare for an ‘election of halves’

This Sunday’s presidential election in Haiti will either be a triumph of democracy over an almost unbelievably grim reality – or a farce. 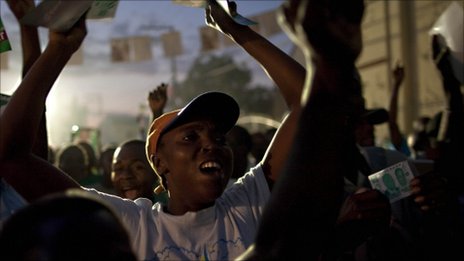 Eighteen presidential candidates are contesting the polls against a backdrop of disasters that a Hollywood movie scriptwriter would have trouble making you believe.

The poorest country in the western hemisphere – created in the 17th Century as a brutal slave colony – has this year alone suffered a devastating earthquake, a violent hurricane and, now, a raging cholera epidemic.

And yet colourful election rallies have been held.

Overhead, small planes paid for by the ruling party have criss-crossed the skies, trailing huge banners with the name of its candidate: “Vote Jude Celestin”.

And the leading female candidate, Mirlande Manigat, has toured the country, pushing her ratings up in some opinion polls to give her a chance of a good showing.

But it is far from politics as usual.

The candidates speak in public squares where some of the one and a half million people made homeless by the quake subsist in shabby tents.

And the politicians pass places where corpses from the cholera epidemic – that has so far killed more than 1,600 people, according to the Ministry of Health – have been collected by squads of workers with disinfectant spray guns and body bags.

“It has been difficult but not impossible to organise these elections,” said top Haitian government adviser Jean Renald Clerisme.

This must surely be the understatement of the year.

Mr Clerisme was speaking in the shadow of the Presidential Palace, a once-imposing white icon, now reduced to rubble by the quake.

However, critics of the election say it is a farce.

What they describe as the most popular political party, the Left-leaning Fanmi Lavalas party, or Lavalas Family in English, of exiled former President Jean-Bertrand Aristide, has been barred from standing.

On the last occasion he was forced out of office by a military rebellion – which he says was backed by right wing Haitians and the United States – a country which still has enormous influence here.

Mr Aristide has always been unpopular with the small but powerful Haitian elite.

Mr Clerisme said the reasons for his exclusion from this election were legal and technical: Mr Aristide’s party did not file candidates’ application forms correctly.

“In a democracy you have rules,” Mr Clerisme said.

Whether Fanmi Lavalas is the biggest party or not, he added, you cannot have one rule for some parties and another for Mr Aristide’s.

“It’s a farce, a charade,” said Nicole Phillips, a lawyer with the US-based Institute for Justice and Democracy in Haiti, who is visiting for the elections.

“We know Fanmi Lavalas is the most popular party because it has won by a landslide all past the elections it has been allowed to contest.

“Excluding it is like holding an election in the United States but not allowing the Democrats to stand,” she said.

A report in June 2010 by the US Senate Foreign Relations Committee called on the Haitian government to ensure that Fanmi Lavelas is “not excluded from the elections because of perceived technicalities”.

But the party was excluded.

Other candidates who were once members of Fanmi Lavalas are standing, but under different party banners.

Critics on the Left say this is because the incumbent ruling elite has successfully “divided and ruled” Mr Aristide’s party through selective patronage.

At the same time, however, some of those candidates would have decided to stand for themselves. They are, after all, politicians hungry for power.

And it is also true that Mr Aristide was no saint.

“He was a demagogue,” said Richard Widmaier, the boss of one Haiti’s private radio stations, Radio Metropole.

“When you’re dealing with a largely illiterate population, it is easy to twist minds.

“I have nothing personal against him, but he did give the press a hard time,” he added.

What Haiti has ended up with this weekend is a sort of half election.

Many people lost everything in the earthquake – including their voting cards. So perhaps half of them will not vote.

The “donor community” (as it is inaccurately known – because it takes as well as gives) is half enthusiastic about the polls.

As a minimum it wants a semi-legitimate administration to emerge from the polls, as does the Haitian elite.

Both groups know that if the current unpopular transitional government remains in power, chaos or violent revolution is possible.

But whether either group seriously intends to subsequently address the fundamental problems of the Haitian people is another matter.

And, finally, what of the people themselves?

They half want an election. For them, the generally good-natured election rallies are a welcome distraction from their everyday struggle to survive.

Music and free T-shirts are the modern equivalent of the ancient Romans’ bread and circuses.

But the people also more than half know that, barring miracles, the elite will hang on to the power and the money, and they will be left in their tents and their slums.

This is an election in a time of cholera.

It is an election in the wake of one of the biggest natural disasters in modern history.

Its success, or otherwise, will probably be measured in halves.