US Will Pay for Haitian Vote Fraud (Boston Globe) 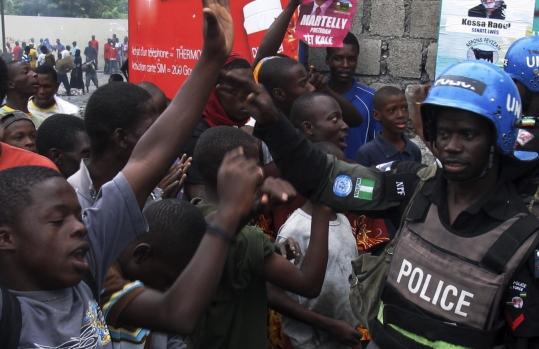 THE DECISION last Thursday to recount the votes in Haiti’s disputed elections is like rearranging the chairs on the Titanic. As this week’s continued protests demonstrate, it will not avoid the catastrophe. Resolving Haiti’s election woes requires the financial backers of the flawed election process — especially the United States — to reverse course and insist on new, inclusive elections run by a new, inclusive electoral council.

Haitian voters see the fraud and disorganization of the Nov. 28 election as part of a long campaign to reduce competition to President René Préval’s INITE party in both presidential and legislative elections. The Provisional Electoral Council, which ran the election, was hand-picked by Préval, and excluded 15 political parties from the legislative elections, including Haiti’s most popular, Fanmi Lavalas, whose leader, former president Jean-Bertrand Aristide, remains in forced exile. The electoral council also excluded 15 candidates from the presidential race without issuing a comprehensive explanation. During the months preceding the elections, Haitians complained about the voter registration program. In the end, over 100,000 voters who had registered did not receive their voting cards. More than 75 percent of voters with cards stayed home on election day.

The current crisis was widely predicted. In October, 45 members of the US House of Representatives warned Secretary of State Hillary Clinton that US support for flawed elections “will come back to haunt the international community’’ by generating unrest and threatening the implementation of earthquake reconstruction projects. According to a cable released by WikiLeaks, even the US ambassador to Haiti described Préval as “orchestrating’’ the election to choose his successor. The Obama administration, along with the United Nations and other allies, dismissed these warnings and the mounting evidence of unfairness, and invested their prestige, influence, and $30 million in the elections. As the WikiLeaks cable explained, US officials held their noses and supported Préval because they believed he was “indispensable’’ to Haiti and a good ally to the United States.

If the results from the election stand, the protests may be just the beginning. No matter who emerges victorious from the counting and negotiating, Haiti will be saddled with a president and Parliament chosen by a restricted group of voters from a restricted list of candidates.

The Haitian people will not accept such a government any more than the American people would. They will keep taking to the streets and confronting the government’s police and UN peacekeepers. Protests and suppression of protests may engender more violence, and render Haiti ungovernable for the five-year presidential term.

US support for Haiti’s flawed elections was also a bad decision for US taxpayers. Our government has sent hundreds of millions to Haiti to respond to the earthquake and has promised billions more. But this money may be wasted without a legitimate, respected government in place.

The “realists’’ say that the first round of Haiti’s elections, no matter how flawed, are done and that there is no money for a do-over. The $30 million election pricetag is a lot of money in poor Haiti, but a small price to pay to avoid wasting the $11 billion promised for earthquake reconstruction.

The Obama administration can avoid an expensive, five-year-long disaster in Haiti, but only if it takes forceful action that addresses the roots of the current crisis. The administration should first announce that it will not provide any further financial support to the current Electoral Council or to any government resulting from this council’s elections. It should then offer to support new elections under a new, credible electoral council, as long as all qualified parties are allowed to participate and all political exiles are allowed to return to Haiti. Haitian voters have suffered enough the past year and deserve nothing less.