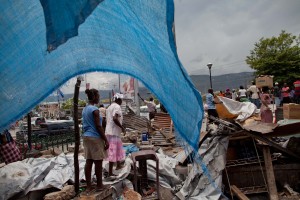 On May 23 and 25, police in the Delmas district of Port-au-Prince destroyed camps where people homeless since the January 2010 earthquake have taken up shelter. During the raids, police and other municipal workers arrested and beat some of those living within the camps. The mayor of Delmas announced that this is part of a new campaign to evict internally displaced persons [IDPs] from public spaces.

Those whose lodging was destroyed were amongst the million-plus people who have lived for 16 months under tents, lean-to’s of shredded tarps, or whatever repurposed materials they could scrounge, from blankets to tin. Neither the Haitian government nor the international community has offered any large-scale resettlement options.

During the offensive, the Delmas employees arrested three camp residents and beat three community activists who tried to protect the camps, according to eyewitnesses.

On May 25, police turned out at two other IDP camps on Delmas routes 3 and 5 and destroyed tents and belongings there.

Immediately after the destruction, Patrice Florvilus, an attorney with the non-profit group Defenders of the Oppressed, and Reyneld Sanon, an organizer with the right-to-housing coalition Force for Reflection and Action on Housing [FRAKKA] and the U.S.-based economic justice group Other Worlds, held a press conference on the scene. Delmas police and workers from the district’s garbage collection office came at the two men with shovels, machetes, and knives. Camp residents formed a security cordon and successfully protected Florvilus and Sanon.

In an interview with the newspaper Le Nouvelliste after the May 23 operation, Mayor Wilson Jeudi of Delmas said, “This is a public place… It can’t remain privatized by a group of people.” In the context of a hyper-concentrated city, much of it still uninhabitable due to rubble from the earthquake, with desperate survivors lodging themselves in virtually any open space, Jeudi offered a new definition of “privatize.” He went on to announce that all public spaces are going to be emptied of residents, leaving them “clean.”

Jeudi called the camps “disorderly” and claimed that many of those in the tents did not actually live there. “They just come to do their commercial activities [thievery and prostitution] and go back to their homes in the evening.”

The mayor said that no compensation would be offered to those ousted from their temporary shelter. “We were all victims of the earthquake,” he added.

In Washington on May 25, four U.S. representatives expressed alarm at the illegal expulsions. “Facing hostile conditions, including adverse weather, violence, and disease, shelter and work are the priorities for every displaced Haitian and must not be compromised,” said a statement by Representatives Donald M. Payne, Yvette Clark, Fredericka Wilson, and Maxine Waters.

In Haiti, grassroots organizations and camp committees are sponsoring a week of actions to support IDP’s right to permanent housing and to protection from eviction. The coalition will sponsor a sit-in in front of the national parliament today, May 27, to denounce Mayor Jeudi. On May 30, they will hold a press conference, and on May 31 they will file a legal complaint against the expulsions with the Ministry of Justice. On June 1, the group will hold a demonstration to demand rights for those living in temporary shelter.

Two days before the Delmas camp demolitions began, several hundred displaced people rallied against evictions in Camp Karade. The event was part of the International Forum on the Housing Crisis, held May 19 – 21 and attended by hundreds. More than 40 grassroots and Haitian non-governmental organizations from throughout the capital region and five other towns, as well as 35 displacement camp committees, were represented. In the first broad-based gathering led by impacted people since last year’s disaster, Haitians strategized with each other and with housing activists from elsewhere in the Americas about how to win their guaranteed right to housing.

Sanon from FRAKKA, the main organizing group of the forum, said in the opening address, “The right to housing is a debt that the government has toward the poor for the responsibility it never took on housing that caused so many people to die.” The toll from the earthquake, an estimated 225,000 to 300,000, was in large part this high because so many inferior quality houses collapsed.

The final declaration of the forum read in part, “We ask: [1] for the authorities to stop the violence that is accompanying evictions…; [2] for the authorities to arrest and bring to justice all those engaged in violence against those living in camps; [and 3] for them to take all measures to help people find permanent housing so they can relocate out of camps.”

Marie Hélène René, a participant of the forum who lost her home in the earthquake and now lives in a camp, said, “We’re so vulnerable. We don’t have anything to stop the flooding now [that the rainy season has arrived]. We don’t know what to do. We congratulate all those who are looking for housing, because we’re really desperate.”

Protection from Eviction a Legal Right

Displaced persons are protected by both Haitian and international law. Article 22 of the 1987 Haitian constitution guarantees “decent housing” for everyone. Article 25 of the U.N. Universal Declaration of Human Rights guarantees every individual a “standard of living adequate for the health and well-being of himself and of his family, including… housing.” Many sections of the Guiding Principles on Internal Displacement of the U.N. Office for the Coordination of Humanitarian Affairs declare protection from displacement, notably for victims of disasters. In a ruling last November, the Inter-American Commission on Human Rights directed the Haitian government to stop evicting IDPs unless it provided them safe alternative shelter.

Interviewed by phone on May 26, attorney Florvilus said, “The president [Michel Martelly] who just came to power must take up his historic responsibility. He promised people [in his inaugural address] he would take them out of the tents in the camps in six months. He must now clarify if this was the formula he had in mind for accomplishing that end. Was the mayor the only one behind this attack?”

Florvilus said, “The government will have to face the nation and the justice system, if not today, then tomorrow.”

Beverly Bell has worked with Haitian social movements for over 30 years. She is also author of the book Walking on Fire: Haitian Women’s Stories of Survival and Resistance. She coordinates Other Worlds, www.otherworldsarepossible.org, which promotes social and economic alternatives. She is also associate fellow of the Institute for Policy Studies.