You might have seen an email from my colleague, Beatrice, a couple of weeks ago describing the brutal and unlawful evictions by the Mayor of Delmas (a suburb of Port-au-Prince) of homeless earthquake survivors living in tent camps.  Of the 8 months I’ve been in Haiti, that was my hardest week; at the time of the evictions, I felt so utterly helpless as a human rights lawyer.

Those feelings of helplessness quickly evaporated.

With IJDH/BAI, I was able to help organize victims, file a legal action against the mayor on their behalf, hold a press conference, organize a demonstration, give legal trainings to displaced communities, and submit a request to the Inter-American Commission on Human Rights, all while training recent Haitian law graduates on human rights lawyering. 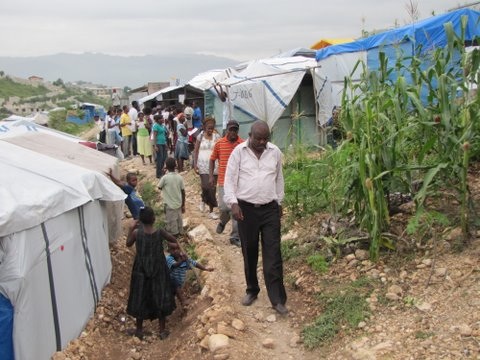 My boss and Director of the Bureau des Avocats Internationaux (BAI), Mario Joseph, asked Beatrice and me to visit the camps getting evicted to start collecting evidence and organizing victims.  So we hopped on a couple of tap-taps and went from camp to camp to talk to victims of the evictions, grassroots leaders and the Mayor himself.

The camps we visited looked like a tornado had just swept through them.

The victims – visibly still in shock – explained that they had been given little to no notice of the evictions.  They told us stories of how the police destroyed their tents and many of their belongings, while yelling at them to leave, but they had nowhere else to go.

When we spoke to the Mayor, we asked him what the legal basis for his actions were.  While under Haitian law he was required to have published a municipal decree announcing the evictions as well as their basis in law or obtained a judicial order for the evictions, he had neither.  He simply told us “I am the law.”

In the following days, I worked with several Haitian law graduates interning at the BAI to reach out to victims ready to file a complaint against the Mayor. I was surprised to see how many former camp residents were ready to use the legal system that so often excludes Haiti’s poor majority to fight against a force as powerful as the Mayor.

We found some of the victims living in the same location as where their camps were before the evictions, now without even tents to protect them from the elements. Others were living in the back of a nearby school.  They showed us a room in the school where they were able to keep the belongings they could salvage from the eviction, and explained that they could not access any of them during school hours.  What we saw belied the Mayor’s claims that the forcibly evicted earthquake survivors all had “bèl kay (beautiful homes)” to return to. 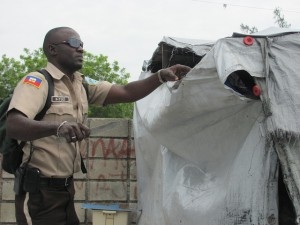 We also visited the local court several times to find magistrate judges to investigate the scene of each eviction.  We had to pay 2,000 gourdes (US $50) for each request for an investigation. I was shocked at the amount and couldn’t believe that the BAI was able to bring the amount of cases we did given our limited resources.

Several judges were hesitant to conduct the investigations, hinting at their fear of being implicated in a legal action against the Mayor.  And when did find a judge, we also had to find him a taxi to take him to the eviction sites while I walked there with the victims, since we were too many to fit in one taxi.

I learned that the courthouse could not afford cars for their judges and so individual lawyers are supposed to provide judges with transport. 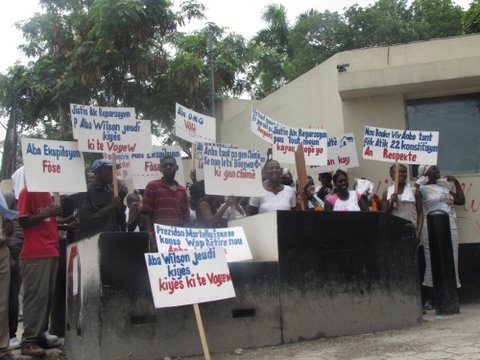 Since the BAI does not have a car, we spent 20 minutes and another 200 gourdes (US $5) just to find the judge a taxi.

The Haitian legal interns and I strategized with Mario on the complaint, bouncing ideas off each other on what provisions under Haitian and international law apply.  We decided the complaint needed to include the directives that the Inter-American Commission on Human Rights issued to the Haitian government on evictions of displacement camps based on the request we filed in October 2010.

Those few days it took to organize evidence and develop our legal strategies were in themselves an important exercise.

The Haitian interns at our office, who had recently finished law school, didn’t have the benefit of clinical training as students the way I did 5 years ago as a law student in New York.  So it was the first time they were able to take real steps on an individual case, and it was one that could potentially affect the lives of the hundreds of thousands of homeless earthquake survivors facing evictions. 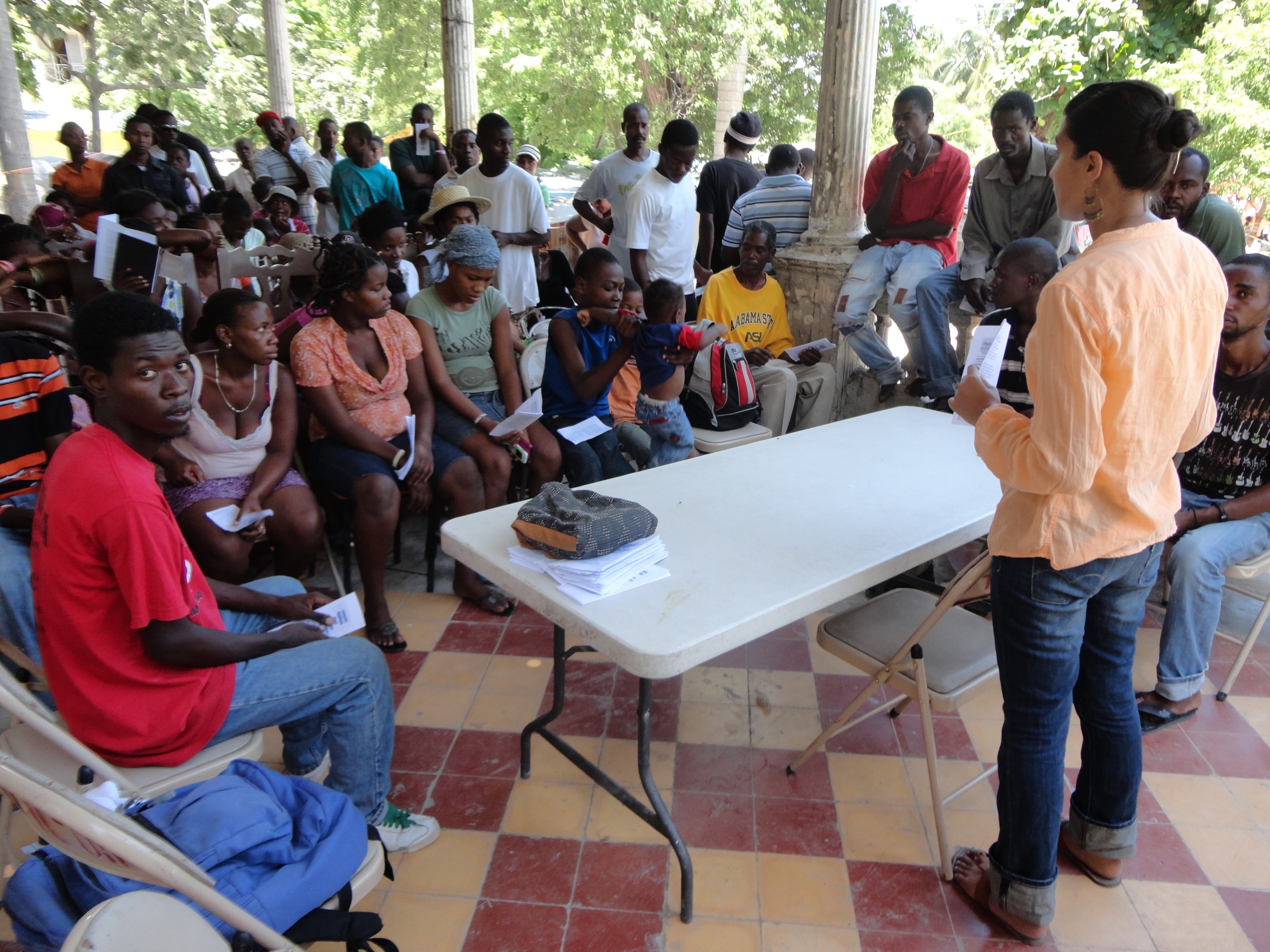 We’ve begun including a discussion about the illegality of the Mayor’s actions in our regular “Know Your Rights” trainings in displacement camps.

We felt that the more people talked about the unlawful evictions, the more they could speak out against them.My experience as a human rights attorney has shown me that the most effective deterrent to human rights violations is an engaged and informed public.

Simultaneously, we worked with grassroots organizations, like Bri Kouri Nouvèl Gaye, Batay Ouvriye, Inivesite Popile, and Asanble Vwazen Solino, and camps that weren’t directly affected by the evictions – all of which were already organized in our coalition against forced evictions known as the Inisyativ Rezistans Kont Ekspilsyon Fòse – to figure out how best to support the victims’ of the recent evictions and prevent other camps from becoming victims of the same crime.  Together, we held a press conference denouncing the Mayor’s actions and organized a protest against evictions in front of the Ministry of Justice at the same time that our legal team filed our complaint with the national prosecutor.

Institute for Justice & Democracy in Haiti’s senior staff attorney, Nicole Phillips, and I worked with our American partners, including the Center for Constitutional Rights, You.Me.We. and TransAfrica Forum to write an appeal to the Inter-American Commission, requesting it to provide new directives to the Haitian government in light of the Mayor’s spree of forced evictions and the national government’s failure to sufficiently condemn the Mayor’s actions.