Out of Options in Haiti? (IJDH)

Amid great fanfare, and surrounded by an entourage equal to his status as newly elected President of the Republic, Michel Martelly visited the Canaraan displacement camp out on the barren outskirts of northern Port-au-Prince early this summer. He had a message to the approximately 30,000 families who eke out an existence there: Factories are coming. 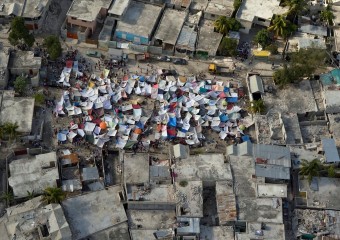 Not just factories, but housing, jobs, services, investment, education, and opportunities—everything dreamed of but denied in the 20-cruel months which have followed Haiti’s earthquake. Certainly the promises contained a double edge—many residents would face eviction to make way for industrial buildings—but for those surviving among the harsh conditions of Haiti’s most forgotten camp, any cause for hope was welcome and the President’s message met a supportive and optimistic embrace.

The larger story of Canaraan is tightly linked to its neighbor, camp Corail, once touted as the very model for the international community’s humanitarian effort in Haiti.

The Corail experiment, and its dismal consequences, is well documented in a recent Rolling Stone article: In short, several thousand earthquake victims were relocated from urban Port-au-Prince to temporary shelters planted in an empty wasteland some distance north of the city.

Marked by the inefficiency, confusion, and high-handedness emblematic of Haiti’s stalled reconstruction effort, the Corail ‘model camp’ did not go as planned, leaving transplanted families far from economic activity and at the mercy of flooding, landslides, and hurricanes.

It is widely recognized as a failure.

Yet any major building project, even an ultimately unsuccessful one such as Corail, offers hope of something to those who have nothing, and soon enough Corail was surrounded by the sprawling series of unplanned settlements now known collectively as Canaan or Canaraan. Like Corail, Canaraan residents are vulnerable to wind and water and find themselves cut off from the economic life of the city. But lacking Corail’s official designation as a camp for internally displaced persons (IDPs), Canaraan residents are routinely dismissed as mere ‘squatters’ unworthy of assistance however pressing their need. Ignored by both the Haitian government itself, and the 3,000+ international NGOs which function like a de facto shadow government, President Martelly’s visit to Canaraan was thus both a validation of resident’s existence and a sign that perhaps their luck was about to change.

Months after the visit, Canaraan is without signs of progress or construction, and residents’ former optimism is increasingly guarded, if not abandoned outright. The future of textile factories in Canaraan remains a question without an answer, but it is worth asking why powerful actors, both Haitian and international, continually present them as a cure-all for Haiti’s many ills. Factory projects have been a staple of USAID projects for a generation, and enjoy the prominent and high-profile support of figures such as Bill Clinton and Ban Ki Moon. The Factory Solution predates the earthquake, and has not been shaken by it. It now represents the single most significant international effort to impact the economic lives of Haitian people.

One need not dig too deep to find the dark side to this proposed answer to Haiti’s problems. To make way for construction, for example, Canaraan families would be displaced from the flatlands into uncertain housing on the same treeless hills where landslides killed 23 people just two months ago.

It is unclear how many of the residents of the sprawling camp will find employment in the proposed industrial complex, but certainly fewer than the many tens of thousands of people who currently live there. Even for those fortunate enough to obtain work, foreign owned textile factories in Haiti have developed a notorious reputation for unsafe conditions, workplace intimidation, union-busting, and wages so shockingly low that it is virtually impossible for even a small family to rely on them for survival. (Wages amount to approximately US $3 a day for textile labor, an in depth report on labor conditions in Haiti can be found here).

In this environment of kickbacks and sexual harassment, where nearly all employees labor without benefit of union representation or health insurance, the prospects for Canaraan residents will likely remain grim even if the President’s promises come true.

This is not to condemn all factories out of hand—factory work is not inherently a social evil. In many societies—including our own—factory labor has provided a pathway out of poverty. For their part, residents in Canaraan express a desire for jobs above all else, and are even willing to accept eviction from their homes for factories that everyone knows will refuse to pay a subsistence wage.

Yet Canaraan residents’ desire for factory work must be understood against a backdrop of economic and political forces which have left Haiti’s poor strikingly boxed-in on all sides by bad options. Physically, the choice between overcrowded slums, flood-prone plains, and denuded hillsides have left Canaraan residents perilously exposed to danger, whether they decide to remain in the city or flee to its outskirts. Likewise, decades of US-driven trade policy has left families with few meaningful economic choices except factory work—effectively selling their labor to northern businesses at bargain basement prices.

Such a narrowing of options is not an accident—it is the intentional result of express U.S. foreign policy. It may come as a surprise to many Americans that the weight and prestige of their nation’s diplomacy was thrown into an effort to thwart raising Haiti’s minimum wage above 31¢ an hour, but this is precisely the sort of foreign machination that Haitians have been forced to live with for decades.

U.S. diplomatic cables, recently exposed by the group Wikileaks, detail the extent of this meddling, in which US muscle was engaged to sabotage parliamentary efforts to raise wages to a level capable of supporting dignified existence.

Against this backdrop, Canaraan residents’ approval of their President’s message emerges as a rational response to a set of artificially constrained options. A house on a landslide-prone hill is preferable to a tarp on a flood-prone plain—likewise, a factory’s starvation wages are preferable to none at all. And what other options are there? Flooded with highly subsidized foreign food products, Haitians have watched the decimation of their agricultural sector. Forced to open borders to ravenous (and sometimes predatory) foreign competitors, Haiti has seen its domestic enterprises left stunted.

As a result, the economic policies of the world’s powerful have effectively pushed Haiti’s poor into an ever narrowing chute—the only escape being into the arms of US, Canadian, or Korean textile corporations and their cut-rate sub-contractors in Haiti.

And with the wage increase successfully neutralized, it’s now impossible to earn a living even at that.

Yet beneath that surface enthusiasm, Canaraan residents voice a complex mix of hope and resignation, stoicism and anger, which is every bit as complicated as the geopolitical forces presently at work upon them.

Derided by the powerful as opportunists and squatters, Canaraan residents’ most simple acts of daily life—planting seeds for a dozen stalks of corn on a small plot of land, rebuilding the tarp roof of a Lutheran church, selling goods at market to send children to school—seem like acts of defiance against a global economic order determined to reduce people to a state of dependence.

No one, perhaps not even President Martelly himself, really knows whether the factory project will ever actually materialize, whether its promised employment will allow an escape from poverty, or if instead it will prove as illusory as countless other promises made to camp residents by politicians, diplomats, NGOs, and the international community.

But one thing is clear, until the powerful actors presuming to decide Haiti’s future put the autonomy, dignity, and well-being of Haiti’s poor majority at the center of reconstruction efforts—instead of simply instrumentalizing them as a pool of cheap labor—Canaraan families will not be able to break out of the trap of poverty, foreign factories or not.