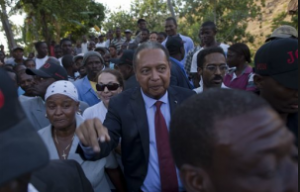 PORT-AU-PRINCE, Haiti — Victims of Jean-Claude Duvalier’s regime hoped for justice when he came home in January, or at least a trial for the former playboy dictator who ruled Haiti for 15 years with a force of thugs and a dank prison that was synonymous with torture.

It hasn’t worked out that way.

Instead of the trial of the century, Haitians are watching as the once fearsome “president for life” is squired about the capital, attending jazz concerts and dinners out of reach of all but a tiny fraction of the impoverished country.

Duvalier, known as “Baby Doc,” appears to be ill, and many human rights activists fear the 60-year-old may die before he can be prosecuted for alleged crimes that include embezzlement, corruption, arbitrary imprisonment, torture and crimes against humanity.

Duvalier and his father, Francois “Papa Doc” Duvalier, are estimated to have ordered the deaths of between 20,000 and 30,000 Haitian civilians during their rule, according to another rights advocacy group, Human Rights Watch.

Haiti’s legal system is a hybrid of the French colonial system and a patchwork of laws dating back to the Duvalier regimes. A judge can file a complaint, but so can anyone who claims to be a victim of a crime, and judges are compelled to investigate. If they find evidence, they ask a prosecutor to review the case and then the judge decides whether it goes to trial.

At first, the system gave hope to some of the thousands who suffered under the dictatorship. A judge summoned the former despot to court two days after his return and informed him he would be investigated for corruption and embezzlement during his 1971-86 reign.

More than 20 victims followed with complaints of their own. Some were prominent Haitians, including Bobby Duval, a former soccer star who said he was beaten and starved during his 17 months of captivity in the dreaded Fort Dimanche prison, and Michele Montas, a journalist who was jailed and expelled with her radio commentator husband.

They stepped forward in large part to educate a country too young to remember the atrocities committed under the Duvalier regime.

But their prominence has meant little: There has not been a great public clamor for a trial, in part perhaps because more than half of Haitians were not alive during the Duvalier era and many Haitians are too preoccupied with the daily struggle to survive to care much about what happened then.

Duvalier has made only three appearances before a judge, the first a chaotic scene in which his longtime companion, Veronique Roy, called journalists from inside the courtroom to provide commentary.

The judge turned his findings over to the prosecutor’s office in July. But that prosecutor has since been fired and a replacement wasn’t named until last week.

There also isn’t an official justice minister to advance the case and it’s unclear when there will be one. President Michel Martelly, who was inaugurated in May, cannot fill the Cabinet because parliament has rejected his nominees for prime minister, who must pick the justice minister and other ministerial posts.

“This is why the case is still stuck,” Judge Carves Jean told The Associated Press in his closet-size office at the courthouse, a decrepit building in downtown Port-au-Prince with water-stained walls.

Reynold Georges, Duvalier’s main defense lawyer, argues there are no grounds to prosecute the former president because the statute of limitations on his alleged offenses has expired.

Georges, an energetic man prone to long, boisterous speeches in defense of his client, says the accusations against Duvalier are pure politics, allegations from his enemies who fear he returned to Haiti to seek the presidency. Duvalier has said he came back to view the damage from last year’s earthquake.

The effort to prosecute Duvalier faced hurdles before it even began.

Haiti’s justice system is widely considered corrupt and dysfunctional. About three-quarters of the 5,000 people imprisoned in Haiti have never even been charged with a crime. They are held in preventive detention while their cases are considered, many languishing in limbo for years.

The troubled justice system is in part a legacy of nearly three decades of Duvalier rule, regarded as one of the darkest chapters in Haitian history.

Jean-Claude Duvalier was tapped at age 19 to become president after his notorious father died in 1971, heading a regime that jailed and tortured political opponents. The Tonton Macoutes, a private militia, enforced the dynasty’s absolute power.

The state coffers allegedly helped “Baby Doc” and his cronies finance an opulent lifestyle while the rest of the country went hungry. A popular movement of Haitians disgusted with the Duvalier regime finally chased the leader into exile in France in 1986.

Twenty-five years later, Duvalier appears to be enjoying his time back home.

The former dictator wasn’t jailed upon his return. He was instead placed under a house arrest that permits him to move about Petionville, southeast of Port-au-Prince. He’s been seen dining with friends at a hotel and a French bistro. He celebrated his 60th birthday in July in the leafy backyard of a private home.

Still, his health seems to be declining. In March he checked into a hospital for chest pains, shuffling out six days later. The judge on the case said Duvalier looks gaunt and sleepy in court.

The U.S. State Department has been mostly quiet about the Duvalier case. U.S. Embassy spokesman Jon Piechowski declined to comment, only referring to a January statement from Secretary of State Hillary Clinton: “Ultimately, a decision about what is to be done is left to the government and people of Haiti.”

Rights advocates point to what they believe could pose another obstacle to prosecution: The Martelly’s administration’s ties to the Duvalier regime. Transition team leader Daniel Supplice is a former minister of social affairs and a diplomat under “Baby Doc.” Prime minister nominee Garry Conille is the son of a former sports minister under Duvalier.

“Most of them are former Duvalierists,” Pierre Esperance said about Martelly’s team. “I don’t have hope that the new authorities are going to move this case forward.”