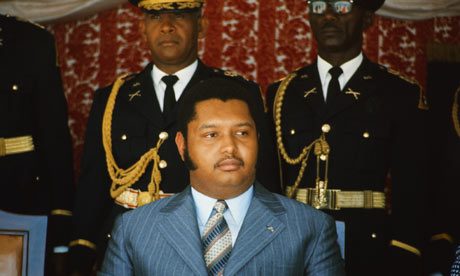 Jean-Claude “Baby Doc” Duvalier, one of the most notorious dictators of the 20th Century, served as the President of Haiti from 1971-1986, following the death of his father, François “Papa Doc” Duvalier.  Gaining power at the age of 19, Jean-Claude Duvalier soon asserted control over the repressive regime created by his father.  The Duvaliers used the official military and police forces, as well as the paramilitary Volontaires de la Sécurité Nationale (popularly known as the Tonton Macoutes), to violently assert their control with widespread impunity. While alleging his support for reforms and increased respect for human rights, Jean-Claude Duvalier’s regime continued to perpetrate systematic human rights abuses against Haitian citizens, including:

Exiled in 1986, Jean-Claude Duvalier returned to Haiti on January 16, 2010.  He was soon charged with financial and political violence crimes.  Haiti’s duty to effectively investigate and prosecute Duvalier for crimes of his administration is clearly established in domestic and international law:

The Importance of Duvalier’s Prosecution in Haiti

While international tribunals generally have the institutional expertise to determine liability for crimes against humanity, the experiences of these same tribunals demonstrate that their use should be limited to contexts where the state is wholly unwilling or unable to provide an effective remedy for grave human rights abuses. International criminal tribunals have often been criticized for their marginalization of the communities most affected by the prosecution and their diversion of funds away from development initiatives that could prevent the recurrence of those abuses.

The lack of public participation in, and feelings of disenfranchisement created by, international criminal tribunals, such as the tribunal created in response to the Rwandan genocide, has resulted in a lack of public support, understanding, and investment in the mechanisms established to obtain justice.  Tribunals and reconciliation processes in which the victims feel marginalized or ignored do not function to provide a real, lasting sense of justice.  This concern is particularly poignant in Haiti, where the majority of the population is too young to remember the horrific crimes of Duvalier’s regime, meaning recognition of his abuses is already limited.  Therefore, IJDH/BAI believes that domestic litigation is integral to ensuring that the public is educated about, engaged in, and supportive of the process.

The International Criminal Court recognizes the primacy of domestic tribunals, and where available such tribunals offer several distinct advantages beyond increased public participation.  Because they use pre-existing judicial structures, domestic tribunals may significantly decrease the costs of prosecuting widespread and systematic human rights abuses. Further, domestic prosecution contributes to sustainable growth and skills development in the national judiciary, a benefit not seen from international tribunals.  Therefore, funds channeled to such prosecutions not only contribute to achieving justice for past abuses, but may enhance the judiciary’s ability to prevent and punish future crimes.  In Haiti, the historically fragile justice sector was further weakened in the 2010 earthquake, and is still struggling to rebuild.  IJDH/BAI believes that successful prosecution of Duvalier has the ability to strike an important blow against impunity in the Haitian justice system, illustrating a commitment to the rule of law, effectuating sustainable growth in Haiti’s judicial sector, and potentially buoying public confidence in judicial tribunals.   Furthermore, litigating in a domestic court permits international stakeholders to combine their efforts to bring Duvalier to justice with their skills development and capacity building efforts in Haiti.

In 2000, Haiti successfully tried one of the most important human rights litigations ever in the Americas.  This prosecution, spearheaded by the BAI, resulted in the conviction of 16 Haitian soldiers and paramilitary for their role in a massacre in the city of Gonaives.  This case marked a sharp break with the long tradition of impunity in Haiti; it was the most complex in the country’s history, and was the first broad prosecution of commanders for human rights violations. Most important, the proceedings were declared fair to victims and defendants alike, by both national and international monitors. This prosecution proves Haiti’s ability to undertake complex, high-profile cases and to provide justice through fair and impartial proceedings.

Our Role in the Prosecution

To date, IJDH/BAI has completed significant work to support the prosecution of Jean-Claude Duvalier. IJDH/BAI filed extensive evidence concerning Duvalier’s political and financial crimes with Haiti’s national prosecutor and continues to assist individual civil plaintiffs to file complaints against Duvalier for human rights violations.  In addition, IJDH/BAI supported the creation of a civil society organization, the Citizen’s Collective for Prosecuting Duvalier (known by its Creole acronym, KOSIJID), aimed at increasing public awareness of the case and its importance. IJDH/BAI staff attorneys and legal fellows are assisted in this work by a committed group of interns and pro bono assistance from the law firms of Ropes & Gray, Mintz Levin and Shearman & Sterling.  With the assistance of these firms, IJDH/BAI has been able to submit draft questions to the Juge d’Instruction (see Figure 2) to him help navigate the complex history of the regime’s criminal activity when questioning Duvalier.

As prosecution continues, IJDH/BAI has identified key priorities and goals for our future work.  These include:

Despite these continued efforts, IJDH/BAI recognizes the existence of potential obstacles to successful prosecution.  IJDH/BAI is using knowledge gained from its more than 15 years of successfully pursuing difficult cases in Haitian and international courts to actively pursue effective means of overcoming these obstacles.  Current obstacles are briefly summarized below.

Overview of the Haitian Judicial System

A former French colony, Haiti’s judicial system is largely based on the civil law system used in France in the early 19th Century.  Laws are codified in a series of legal codes, including the civil and criminal codes.  Haiti’s Constitution also defines basic legal rights of all Haitian citizens and makes clear that any international treaties that Haiti chooses to ratify becomes binding in domestic tribunals as well.

The Minister of Justice holds primary responsibility for overseeing judicial matters in Haiti, as well as responsibility for the security and police forces.  Please see Figure 1 for an overview of the Haitian court system, as defined in the 1987 Haitian Constitution. 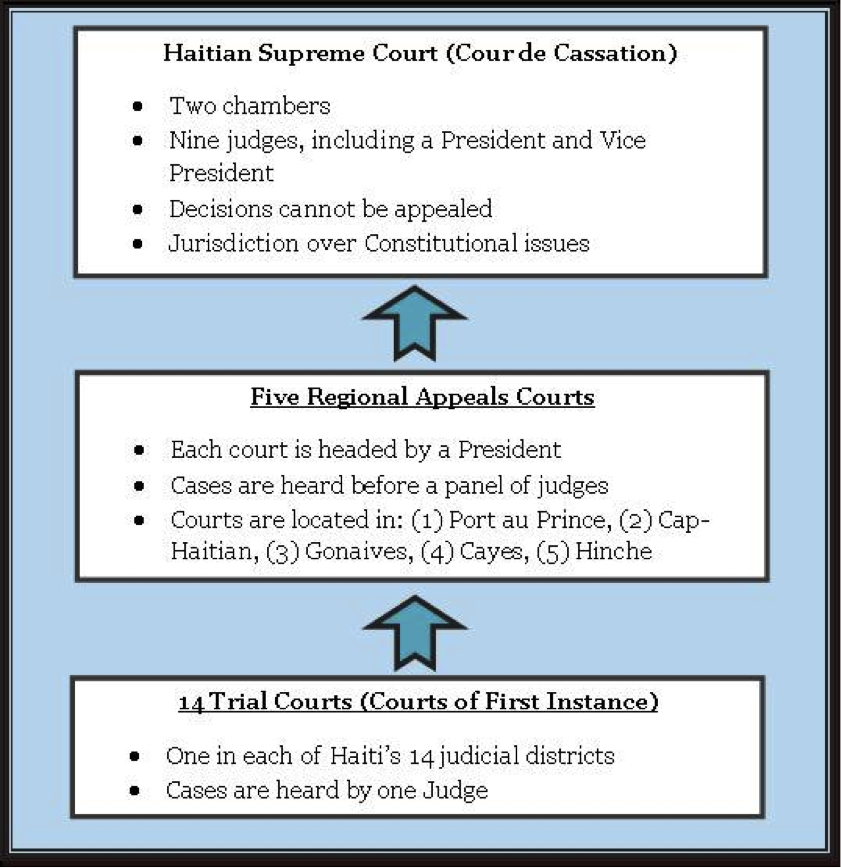 In Haiti, individual civil complainants can join a case originally brought on criminal grounds by the Haitian government prosecutor.  Therefore, once criminal charges have been filed, victims attach individual civil claims seeking redress for crimes against humanity onto the existing case, to be heard together.

Complaints are usually filed with the government prosecutor (Commissaire au Gouvernement) who may refer them to a Juge d’Instruction.  After receiving a complaint, the Juge d’Instruction has three months to investigate the complaint and determine if there is sufficient basis for prosecution.  Because this three month period restarts with each new complaint filed, the period for gathering evidence and investigation by the judge may be extended, such as in the case of Duvalier where additional individual complainants continue to file claims.  As necessary, the Juge d’Instruction may also request an extension to this investigatory period.  If the judge allows prosecution, the government prosecutor (and any individual legal representatives of civil complainants that have joined the case) may prepare and present their case before the appropriate court, see Figure 2.  In the case of Duvalier, criminal charges have been filed and are currently before the Juge d’Instruction.  IJDH/BAI and others are now continuing to prepare and submit the claims of individual civil complainants.