Combating Sexual Violence Against Women and Girls in Post-Disaster Haiti: 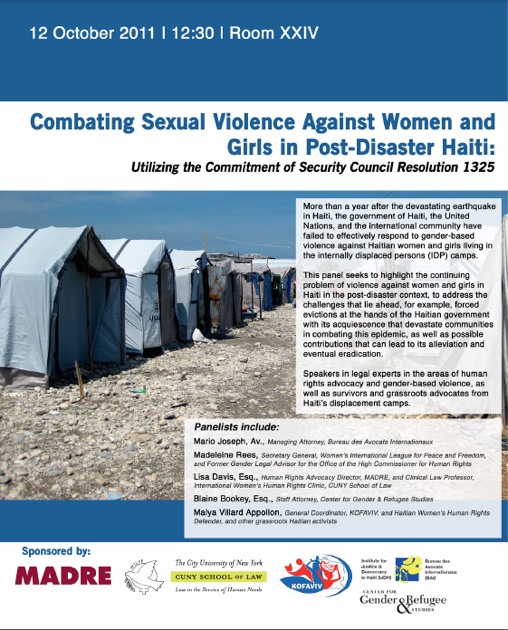 More than a year after the devastating earthquake in Haiti, the government of Haiti, the United Nations, and the international community have failed to effectively respond to gender-based violence against Haitian women and girls living in the internally displaced persons (IDP) camps.

The panel seeks to highlight the continuing problem of violence against women and girls in Haiti in the post-disaster context, to address the challenges that lie ahead, for example, forced evictions at the hands of the Haitian Government with its acquiescence that devastate communities in combating this epidemic, as well as possible contributions that can lead to its alleviation and eventual eradication.

Speakers in legal experts in the areas of human rights advocacy and gender-based violence, as well as survivors and grassroots advocates from Haiti’s displacement camps.

Madaleine Rees, Secretary General, Women’s International League for Peace and Freedom, and Former Legal Advisor for the Office of the High Commissioner for Human Rights