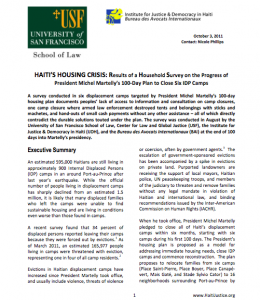 A survey conducted in six displacement camps targeted by President Michel Martelly’s 100-day housing plan documents peoples’ lack of access to information and consultation on camp closures, one camp closure where armed law enforcement destroyed tents and belongings with sticks and machetes, and hand-outs of small cash payments without any other assistance – all of which directly contradict the durable solutions touted under the plan. The survey was conducted in August by the University of San Francisco School of Law, Center for Law and Global Justice (USF), the Institute for Justice & Democracy in Haiti (IJDH), and the Bureau des Avocats Internationaux (BAI) at the end of 100 days into Martelly’s presidency.

An estimated 595,000 Haitians are still living in approximately 900 Internal Displaced Persons (IDP) camps in and around Port-au-Prince after last year’s earthquake. While the official number of people living in displacement camps has sharply declined from an estimated 1.5 million, it is likely that many displaced families who left the camps were unable to find sustainable housing and are living in conditions even worse than those found in camps.
A recent survey found that 34 percent of displaced persons reported leaving their camps because they were forced out by evictions. As of March 2011, an estimated 165,977 people living in camps were threatened with eviction, representing one in four of all camp residents.
Evictions in Haitian displacement camps have increased since President Martelly took office, and usually include violence, threats of violence or coercion, often by government agents. The escalation of government-sponsored evictions has been accompanied by a spike in evictions on private land. Purported landowners are receiving the support of local mayors, Haitian police, UN peacekeeping troops, and members of the judiciary to threaten and remove families without any legal mandate in violation of Haitian and international law, and binding recommendations issued by the Inter-American Commission on Human Rights (IACHR).
When he took office, President Michel Martelly pledged to close all of Haiti’s displacement camps within six months, starting with six camps during his first 100 days. The President’s housing plan is proposed as a model for addressing immediate housing needs, close IDP camps and commence reconstruction. The plan proposes to relocate families from six camps (Place Saint-Pierre, Place Boyer, Place Canapé- vert, Mais Gaté, and Stade Sylvio Cator) to 16 neighborhoods surrounding Port-au-Prince by building new homes and allocating cash to pay for housing repairs or rent. A comprehensive housing plan is desperately needed in Haiti. Until adequate housing is available, families will continue to live in squalid camps and be threatened with evictions. This briefing paper evaluates implementation of President Martelly’s housing plan 100 days into his presidency, including residents’ access to information and input on the plan, camp closures, and the provision of housing assistance. Much of the analysis is based on the results of a survey of 150 families in the six IDP camps slated for closure under the plan. The following is a summary of the paper’s findings.

Families living in the six IDP camps are struggling to survive.The survey results indicate that conditions in the six camps are desperate. Families often go without any food or safe drinking water.

Camp closures and cash payments conflict with durable solutions proposed.One of the six camps was closed (Stade Sylvio Cator) and residents from another camp were relocated (Place St. Pierre), both without the protections or benefits promised in the Martelly plan. The families from Stade Sylvio Cator were unlawfully evicted by the Mayor of Port-au- Prince and Haitian police without a court order. Families without alternative housing were relocated to land that survey respondents described as having even less security, lighting or access to basic services such as toilets, water and food. Two-thirds of the families received US$250 to relocate. Residents who received the money complained that it was not enough to rent or buy materials to build a home.

Little effort had been made to involve communities at expiration of 100 days.

The survey revealed a lack of community mobilization or involvement in the camps. Most respondents had not been informed of or consulted about camp closure/relocation plans. Respondents reported that their limited encounters with relocation officials/NGOs came in the form of asking residents to leave.• 38% had heard their camp may close, one-half of whom heard by rumor from other camp residents
• 82% had not been consulted on their opinion for closing the camp

Recommendations for the Government of Haiti, local government and UN/NGO agencies assisting with housing assistance:

(1) Camp residents must be protected from violent and unlawful evictions. Camps should remain open and supported until families are able to move to alternate housing that meet minimum security and living standards;(2) Community outreach is critical for families to participate in every stage of the resettlement process and ensure that the program responds to their needs;

(3) Resettlement assistance must accountable and transparent to camp residents by delivering information about assistance; measuring, monitoring and making public the outcomes of the project; and allowing residents to register complaints about project implementation;(4) Cash payments for resettlement should be tied to a comprehensive assistance program to ensure that displaced families have access to durable housing solutions.